A group of iron workers celebrating the completion of a spire installation at Los Angeles’s newest high rise has gone viral as people across the country shared a photo of the men standing at the spire’s tip top.

According to a report from KTLA, on September 3, crews completed installation of a 294-foot, 9-inch spire atop the Wilshire Grand. The spire gives the 73-story tower a height of 1,099 feet, making it the tallest building west of the Mississippi.

To snap the photo, the four workers climbed a maintenance ladder within the spire and harnessed in both inside and outside of the structure, KTLA reports. One other veteran iron worker took a separate daring photo which you can see below. The tower’s Facebook account has also posted a video of the spire being installed, and is also included below.

The Wilshire Grand is slated to open in March 2017. The $1 billion tower will include a 900-room hotel, restaurants as well as retail and office space. Construction began in February 2014. 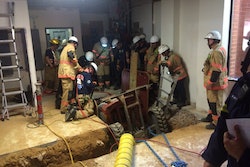 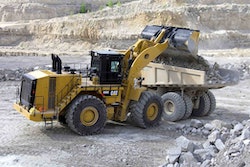