An excavator operator in Alabama is lucky to be alive after the demolition of a smokestack at a historic mill went wrong earlier this week.

According to a report from WIAT TV, demolition contractor Tim Phifer and his crew set off two explosive charges within the smokestack Tuesday, located at Avondale Mills in Pell City, but the tower just wouldn’t fall. Al.com reports could be more than a century old.

When the charges didn’t bring the smokestack down, Phifer moved in with his excavator to dig away at the base.

As you can see in the drone footage below, as Phifer digs, the smokestack does indeed begin to fall apart—just not in the direction he was hoping. As the base crumbles away, the entire structure tips over directly on top of the excavator. Phifer told al.com that the 158-foot stack was built with about 2.6 million pounds of material.

As the structure falls, you can see Phifer swing the machine’s boom away in order to move the cab as far away from impact as possible. And the maneuver might have saved his life.

The smokestack scores a direct hit on the machine and despite half of the cab caving in and being filled with bricks, Phifer walked away.

He told WIAT that as the structure was coming down on top of him he thought, “stay in the hole, that cab was made for that thing turn over on top of it, I was safer inside the cab then coming out of it.”

The story caught fire on social media this week with several operators offering their thoughts on how the situation could have been better handled. Below the video is one of the better opinions on the situation we’ve seen from Darrel Gower on Facebook. Just click the ‘More’ button in the embedded Facebook post to see his full comment.

This is why they make shape charges. Also, demolition explosives costs much less than a new track hoe.But, this was a...

Worker dies after suffering fall on residential jobsite near Chicago 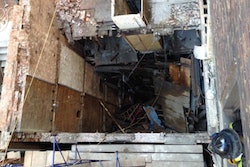