This video is a few years old, but its quickness and shock value haven’t diminished. The footage is from a mounted camera inside a train and shows as it attempts to quickly brake as a construction crew and a few machines appear out of the fog after rounding a bend.

You can see a few of the guys near the tracks doing their best to get out of the way. The machine the train crashes into gets clipped in the back.

The post on YouTube doesn’t go into too much detail, but from what we’ve been able to gather from some of the comments and a bit of Google research, this appears to be an accident that happened somewhere in the UK. According to the commenters, the crew was doing a bit of work on the tracks, but had not gained authorization, thus, the train engineer didn’t know they would be there. Again, who knows if that’s the right story, but it sounds logical.

Just goes to show you, as important as safety on the jobsite is, paperwork can be equally important. Especially around train tracks. Watch the video below. 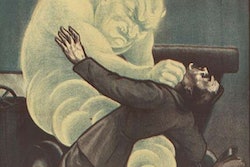 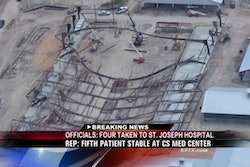