As a Category 4 hurricane tore through Cuba on its way to the Gulf of Mexico, construction crews still rebuilding beachfront areas last year’s Hurricane Ivan damaged or destroyed in Alabama and the Florida panhandle were leaving their large cranes behind.

“It’s just not enough time to move all the equipment,” said Joe Brown, general manager for Joe Raley Builders in Gulf Shores, Ala. The company is repairing beachfront high-rises.

Forecasters predict Hurricane Dennis will intensify and hit the United States anywhere from Florida to Louisiana by Sunday or Monday.

Joe Raley Builders is laying its cranes on their sides in preparation for the storm. “It’s been normal procedure for contractors to simply lay all ‘crawler-type’ equipment on the ground until the weather passes,” Brown said.

The cranes were made to do this, he said. Contractors fold the cranes’ booms, which are in two parts, and then pin the machines to the ground with four- or five-foot pins.

Jim Woodall, executive vice president of the northwest Florida chapter of the Associated General Contractors of America, said contractors could pin cranes to the ground and loop the parts with straps and cables. He suggested housing smaller equipment in protective buildings on the construction site.

“Some (contractors) don’t pay attention to precautions until it’s too late,” he said, “and they gamble over $900,000 worth of equipment.”

“Hurricanes aren’t necessarily predictable, but they do follow patterns. They usually run counterclockwise, so if you know it’s coming in a certain direction you can strategically locate equipment out of the way to help protect it better.”

Brown said laying cranes on the ground doesn’t guarantee the safety of the machinery. “Even though they’re on the ground they could still get flooded and damaged,” he said. 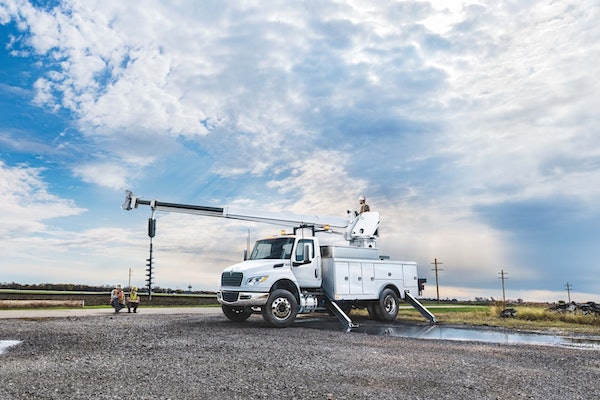 In re-tooling the MV Series, International focused on maneuverability, visibility, safety and an extra splash of exterior styling.