While grading the site of a new home development near San Diego, construction crews uncovered fossils paleontologists have dated all the way back to the Ice Age.

According to a report from the San Diego Union-Tribune, the workers at the Carlsbad jobsite unearthed the bones of “ancient mammoths, horses, turtles and even a prehistoric bison—the second ever found in San Diego County.”

The fossils were discovered earlier this summer, the paper reports, and excavation of the bones isn’t expected to be completed until November. Construction of the housing units on the property, developed by Cornerstone Communities, is expected to begin next year.

John Suster, the superintendent on the project which will accommodate homes and hundreds of apartment units, said he had no worries at all about the stoppage of work to excavate the fossils, which are between 50,000 and 200,000 years old.

“I said ‘Take your time, this is kind of cool,'” he told the Union-Tribune.

Tom Deméré, curator of paleontology at the San Diego Natural History Museum said the “fossils have the potential to tell us a great deal about the climate, the environment (and) the ecology of that time they were living.” 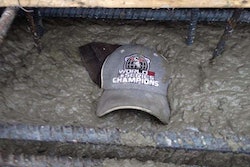