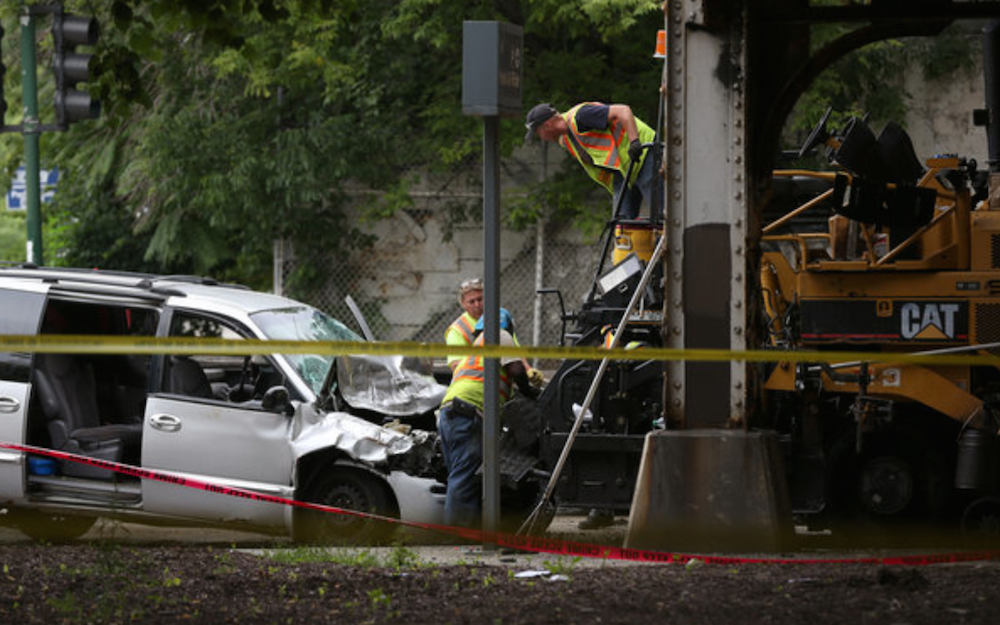 A crew works to dislodge a minivan from a paver after a crash in Chicago Saturday morning that killed one construction worker. Credit: Abel Uribe/Chicago Tribune

A construction worker in Chicago was killed early Saturday morning and several others were injured when a minivan drove through barriers on a road construction work zone and crashed into the rear of a paver.

Veteran construction worker Jose Tafoya, 58, was working behind the paver when he was struck by the vehicle inside a work zone on South Western Avenue, according to a report from the Chicago Tribune.

Tafoya’s coworker Collin Martin was driving the paver when the crash occurred. Martin said Tafoya usually works in front of the paver but had gone to the rear to help other workers.

Illinois Assistant State’s Attorney Elizbeth Novy told the Tribune Sunday that the 19-year-old driver of the mininvan, Erick A. Lopez, was intoxicated at the time of the crash, with a blood alcohol content of .195—more than twice the legal limit of .08.

Novy said Lopez was driving two other people home from a party and traveling at a high rate of speed. He weaved in and out of construction barriers before crashing into the paver, Novy said. Lopez and both passengers were hospitalized due to their injuries and several other construction workers were treated at the site with injuries of their own.

Court records show that Lopez has been charged with “reckless homicide, aggravated DUI, misdemeanor DUI, having no car insurance and failure to carry or display a drivers license,” according to the Tribune report.

The compact cement mixer can fit on tight jobsites and dispense concrete at up to 330 degrees around the machine.