Western Star Debuts a "Construction Powerhouse" of a Vocational Truck

Western Star's overhaul of its vocational line continues with the debut of the all-new 47X.

With a standard 111.6-inch bumper-to-back-of cab (BBC), the 47X will usher out the Western Star 4700, and will do so by adding significant flexibility. The 4700 is exclusively available in 110-inch BBC, but for the 47X, an optional 110.8-inch BBC will also be made available for fleets that need to meet federal or local bridge laws, such as mixers or dumps.

Daimler Trucks North America Vice President of Vocational Market Development Sam Parlier called the new model a "construction powerhouse," noting that with its shorter hood and up to 50-degree wheel cut, the 47X optimizes maneuverability for work on jobsites and congested urban environments.

The 47X is the younger, smaller and lighter sibling in Western Star's X-Series and joins the 49X as the third and fourth trucks in the lineup (both models are available with set-forward and set-back front axles). The X-Series is Western Star's new-generation lineup – a product suite born following a seven-year development cycle alongside customers, and the 47X was developed in unison with the 49X, which debuted about a year ago.

Approximately 200 pounds lighter than the 49X in like-for-like spec and 10 inches shorter, the 47X is suited for weight-sensitive applications like mixers and bulk haul.

Light-weighting was a focus of the 47X engineering team. Parlier said the group "built a truck from the ground up, and they weighed every single part to determine where we were putting hidden weight."

The X-Series steel-reinforced aluminum cab further reduces mass by up to 8% while offering 13% more room than competitive models. An optional two-person bench seat is available, and a new space-optimized, in-cab battery box adds legroom. Feedback from early adopters of the 49X drove engineers to develop the new battery box seat, which will become the new standard across the X-Series line next year and add up to 3 inches of legroom.

An optional roof-mounted condenser offers maximum airflow through the radiator for stationary applications like construction and mining while keeping operators comfortable.

All X-Series models come standard with a wrap-around dash that provides easy access to the driver command center and B-panel. On the B-panel, a flex panel can be prepped for a tablet or configured for an additional 12 switches or 10 gauges. The truck’s interior also includes premium appointments like metal accents, and all-metal exterior brightwork is distinctive as well as durable.

The 47X’s unique hood provides a forward visibility of 24.8 feet – an 11-inch improvement over the 49X – while its composite construction and ISO Tech suspension system resists bending and cracking by absorbing and dissipating vibrations from road inputs.

The 47X comes standard with Detroit's DD13 Gen 5 engine, which features higher compression ratios and a new swirl piston design to improve combustion and efficiency, matched to an Allison transmission. ThermoCoasting in the DD13 Gen 5 prevents aftertreatment cool-down during a driving regen to keep the system at its optimum temperature and reduce the need for parked regens.

Cummins L9 and X12 engines are available for weight-sensitive applications.

Rectangular fuel tanks and a raised aftertreatment-system mounting are offered with Cummins engines for better clearance for belly plows.

The 47X is also offered with the all-new DT12-V transmission, which is built on DT12 and has more than 35 million miles of vocational-specific testing. The DT12 includes three work-ready mode applications: Rock-free mode, Off-road mode, and Paver mode for the challenges of specific vocational applications. Users also have the choice of Eaton Fuller or Eaton UltraShift transmissions.

The 47X’s mid-chassis packaging has a number of clear back-of-cab configurations while unobstructed frame rails provide more efficient body integration. The QuickFit Interface System offers ready access to electrical architecture and was designed for quick TEM interface, programming and access to power. The CHEC Tool from DTNA enables TEMs and dealers to view and modify electrical configurations, giving them the power to customize inputs and outputs and change parameters within minutes.

A Flex Panel located in the dash B-panel of the truck gives TEMs the ability to mount body controllers, freeing up the space between the seats that's almost always been used for this function. Parlier said safety was the primary driver of this change, noting that it's easier to look up at the dash than it is to search for body controls in the floor.

The all-new 47X is available for order now, and delivery to customers begins in early 2022. Even though the industry is facing a generational shortage in parts that has hindered truck production for much of this year, Parlier said, component commonalities between the 47X and 49X help with parts procurement. 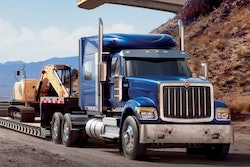 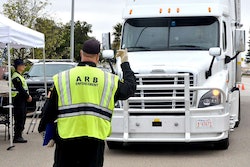 Zero-emissions trucks are coming ‘one way or another’ 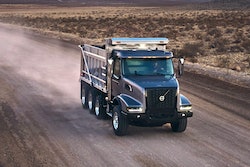