Ford has unveiled the latest version of the off-road ripping F-150 Raptor. The new 2021 Raptor has some significant upgrades including a new suspension design. But it will also mean the return of a V8 engine to Ford's beloved off-roader. Get all the details in the video above.

Mentioned in This Video:

Last year Ford unveiled the 2021 F-150 with a new design, new interior, a new hybrid powertrain option, an integrated generator in the bed and a lot more. It’s a fully-packed next-generation of truck.

But then just a few weeks ago Ford announced that it was expanding its Tremor lineup to include the F-150 as well. So now you can grab one of these 2021 F-150s and slap the Tremor off-road package on if the FX4 just doesn’t give you quite enough off-road capability.

And if the new F-150 Tremor doesn’t quite meet your needs and you were waiting for a new Raptor? The wait is officially over.

Ford has unveiled the newest version of its mega popular off-road pickup. Ford says the truck has been completely redesigned, calling it the most capable Raptor they’ve ever built. There’s a new rear suspension design, bigger tires and of course more tech to talk about and, maybe most importantly, Ford has confirmed the triumphant return of the V8 to Raptor.

We’ll start briefly with the new look of the truck. You can pretty clearly see the influence of the new exterior design of the 2021 F-150 thanks to the new headlights and grille.

Ford says the front end look of the Raptor has been completely rethought with a power dome hood, new blacked out grille and a lighting design that stretches fender to fender.

That new hood is more than just looks though. Ford has implemented a new heat extractor into it and they’ve added functional side vents at the top trailing edge of the fenders.

Moving around to the rear of the truck you’ll find blacked-out taillights and a design that continues that fender to fender look of the front.

You’ll get steel bumpers on the front and rear. Just under that front bumper is a new front skid plate that is wider than what was found on the 2019 model. The new skid plate not only offers more side-to-side protection but also more protection toward the front of the truck as well.

But the most important changes to the 2021 Raptor are beneath the truck, so let’s move from that skid plate toward the rear where Ford has implemented a new suspension design.

A new five-link coil suspension replaces the leaf springs found on the current standard and Tremor package F-150s. This new rear suspension is exclusive to Raptor.

The coil springs are 24 inches long, good enough for what Ford says is the longest in this class of truck. The suspension has extra-long trailing arms for better performance on rough terrain, but just the fact that the coil spring designs incorporates a track bar means you’re going to get a better ride and better handling out of this setup than you would with a leaf spring design.

However, Ford says another benefit of the new suspension is that the new Raptor can put more torque to the rear wheels faster than before. Ford has designed its engine software around the new suspension capabilities and says the 2021 Raptor is quicker off the line, has faster acceleration and better throttle responsiveness.

Complementing the new five-link suspension are the largest shocks ever put on a Raptor. The new Fox internal bypass shocks are 3.1 inches in diameter and more importantly, they’re electronically controlled.

The previous 2019 Raptor had a smaller version of these Fox Live Valve shocks too. But basically they’re smarter about the amount of damping that provide. On the new Raptor, Ford has placed suspension height sensors on the truck and using those sensors in addition to various other sensors Ford has placed on the truck, the shocks can adjust damping rates on the fly at up to 500 times per second at each corner of the truck.

Ford says this means that the truck will respond to changes in the terrain faster than you can even perceive the change yourself.

The 2021 Raptor will also be available with huge tires. You’ll be able to outfit the truck’s 17-inch wheels with 35- or 37-inch tires which are the largest ever fitted to a production half-ton truck.
These tires are BFGoodrich All-Terrain tires made specifically for the Raptor and when the truck is wearing the 35-inch variants, you’ll enjoy a full foot of ground clearance, a 31-degree approach angle, 23.9 degrees of departure angle and a breaker angle of 22.7 degrees.

Slap on the 37-inch tires and you go up to 13.1 inches of ground clearance, 33 degrees of approach angle, 24.9 degrees of departure angle and 24.4 degrees of breaker angle.

Impressively, all of these specs with respect to the Raptor’s relation to the ground and obstacles are increases over the 2019 model. So, the suspension and these new tires are substantial upgrades.

The Return of V8

In terms of engines, the 2021 Raptor will still come equipped with Ford’s twin-turbo, 3.5-liter EcoBoost high-output V6 just as the last model did. It’s parked to a 10-speed Ford automatic transmission.

And while it’s nice that max payload and towing both increased to by 200 pounds to 1,400 pounds and 8,200 pounds, respectively, you might be a bit disappointed to hear that the V6 is still standard. There’s just a lot of folks out there who miss the sound of that V8.

Well, Ford is trying to help. First, they’ve put in a new equal-length exhaust system on the 2021 Raptor that without getting too far into the weeds of the design of this thing has a pass-through muffler design and delivers what Ford says is a “throatier engine sound.”

Plus, the design of this new exhaust actually lets you adjust and configure the sound of the exhaust in Quiet, Normal, Sport and Baja modes.

But maybe you’re still unhappy. Or maybe confused, because didn’t I mention something about a V8 at the top?

As first reported by the folks over at Jalopnik and then confirmed by Ford, you will soon once again be able to outfit a Raptor with a V8 engine.

Jalopnik says Ford told them in a statement that a new “Raptor R” variant is coming in 2022 and that this Raptor R will have a V8 in it.

Unfortunately that’s all the details on the Raptor R that we have at the moment other than the fact that you can likely expect it to maybe be Ford’s super truck challenge to the 700-horsepower Ram TRX.

🚨🚨🚨Check Out Our Other Recent Videos!🚨🚨🚨

How John Deere Just Made Its Best Motor Graders Even Better 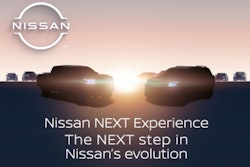 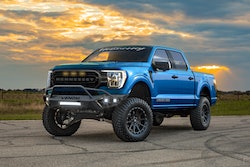