Ford F-150 Lightning Pro: Made to Be a Work Truck (Video) 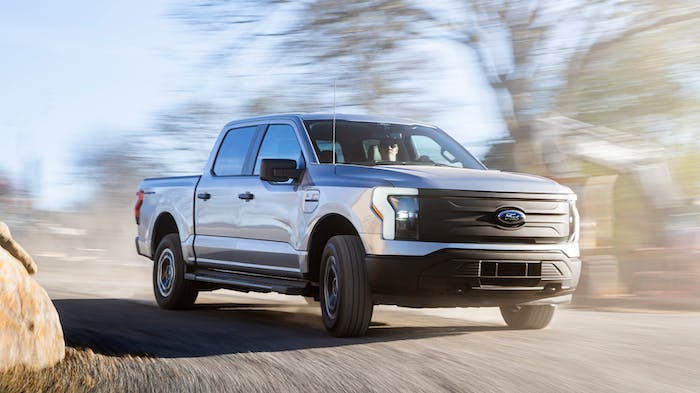 There is nearly a three-year waiting list for the Ford’s electric F-150 Lightning Pro. With more than 200,000 reservations by December, the company announced plans in January to double production of the electric trucks as reservations were cut off. Deliveries of the truck are underway in May.

As it turns out, it’s the commercial fleet customers who have serious interest in the Ford F-150 Lightning Pro, the work truck version of the battery-powered pickup. Before any tax incentives, the electric Lightning Pro starts at under $39,974. (To see the Lightning for construction applications, check out the video at the end of this article.)

There is no off-road package, because the design allows for all models to be the same dual-motor drivetrain 4x4 standard. If equipped with the optional Max Trailer Tow Package, maximum towing with the extended range battery (only available to fleet customers) increases to 10,000 pounds.

“We just didn't take a retail vehicle and kind of dumb it down,” says Jason Turnbull, Ford F-150 Lightning marketing manager. “From the ground up, we built this for our commercial customers.” 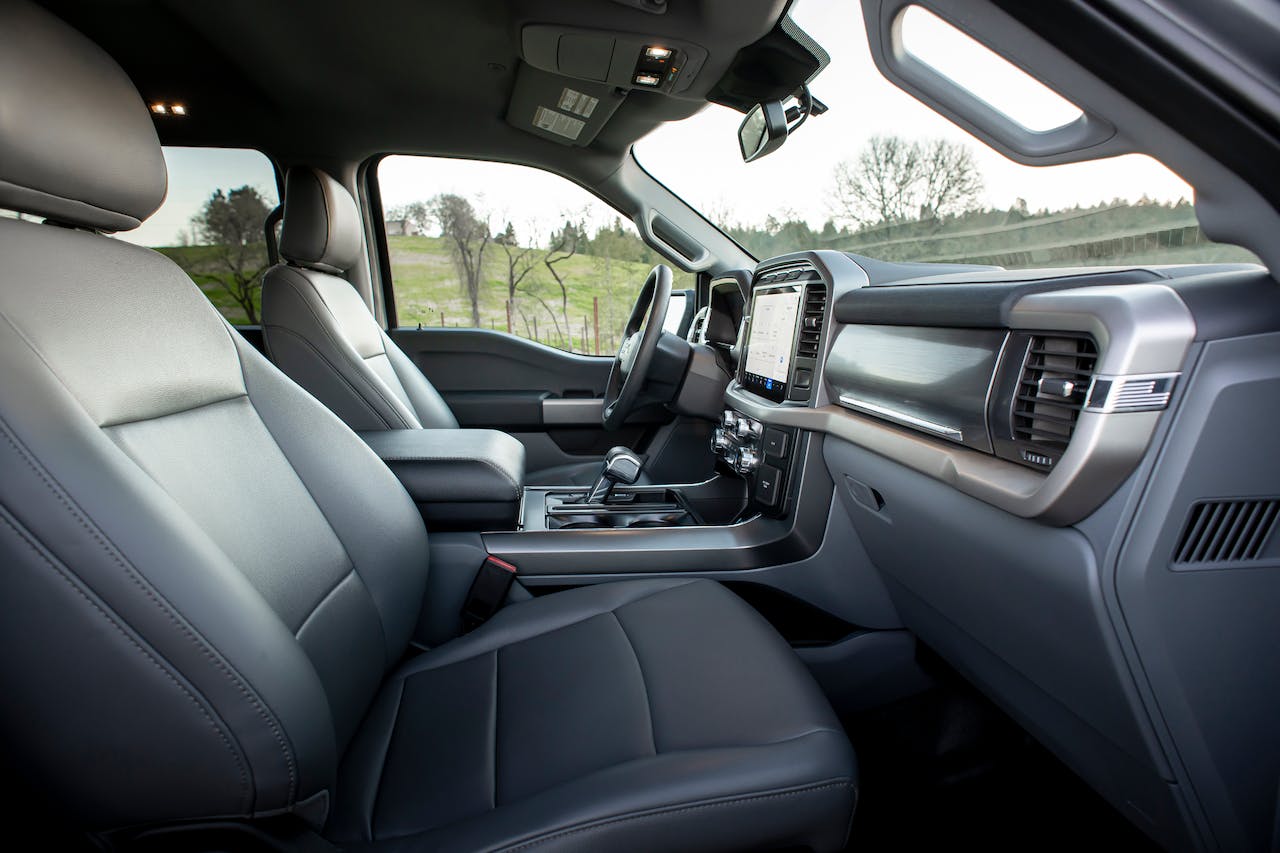 Ford’s intent was to deliver an electric F-150 that commercial fleets could transition to with minimal issues. Turnbull says all the common tabs are identical, so for fleets making the transition, any upfitted storage units, toolboxes, etc., will still fit and can easily be transferred.

There are two battery options that Ford refers to as standard and extended range. The standard battery range of the Lightning Pro is an estimated 230 miles, while the extended range is projected at 300 miles.

According to Ford, extensive review of telematics data showed that for an average F-150 commercial customer, daily travel is 174 miles. The truck monitors charge constantly and will account for speed, payload, weather, and direct the driver to the nearest changing station if needed.

The batteries and motors are 100% within the frame rails, with a metal shielding around for more durability. Ford says the body of the truck is military grade aluminum, and the upgraded high-strength steel frame isolates the battery pack from the road and the rest of the vehicle.

There are several charging options for the Lightning Pro. The truck comes with a 32-amp Ford Mobile Charger and an optional 48-amp, 240-volt Ford Connected Charge Station.

Like the 2022 E-Transit, the Lightning Pro has an in-vehicle charging app, called Charge Assist, which directs drivers to locate and initialize public chargers right from the vehicle. All 70,000 plugs within Ford’s Blue Oval network are included.

“All those heavy applications, such as a welder or generator, anything that you need extra power for, we actually have a 240-volt outlet on the truck that can carry that load,” Turnbull says. 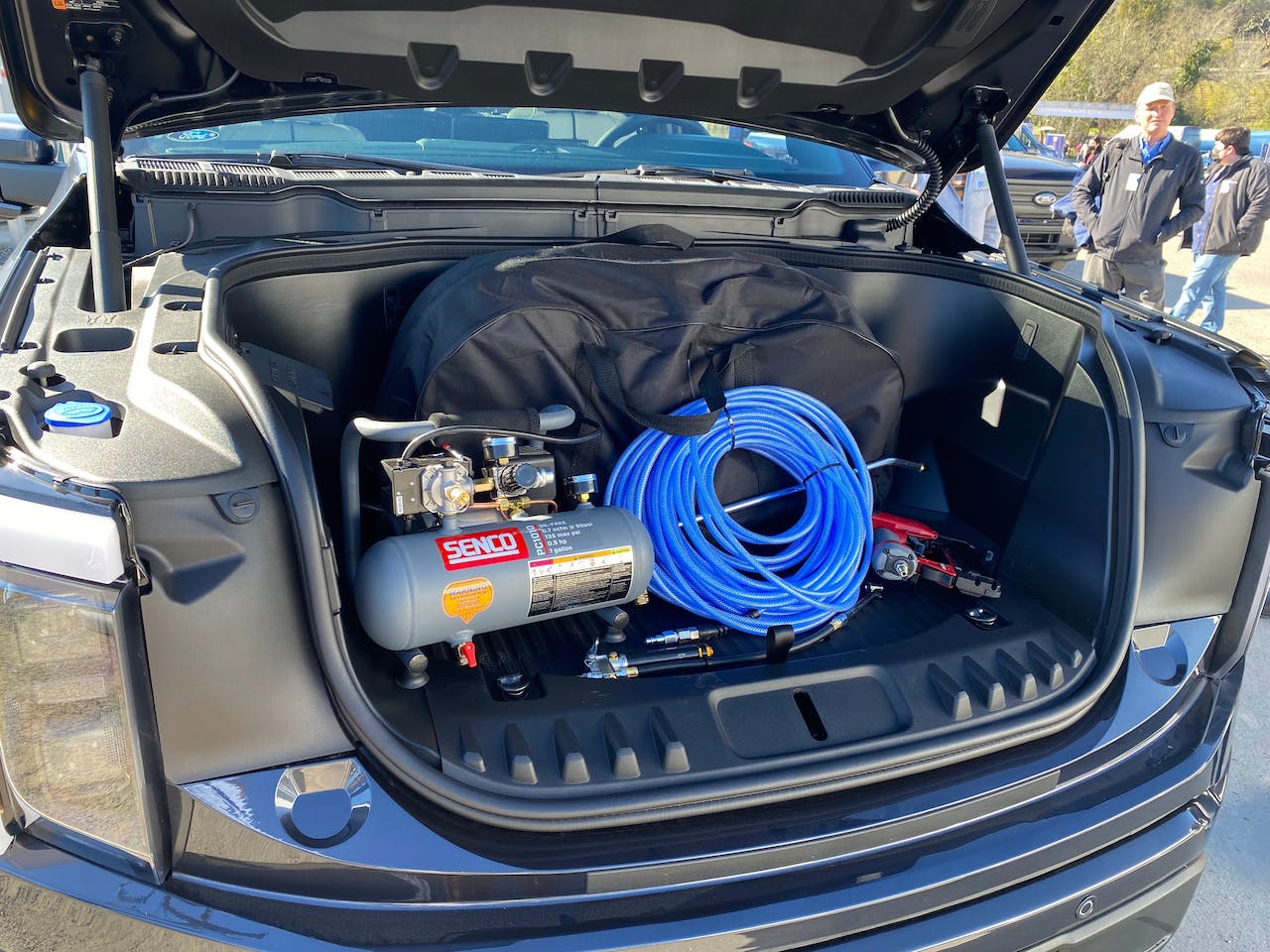 Dubbed the mega power frunk, this is the storage area under the hood of the Ford Lightning Pros that holds up to 400 pounds and includes a drain for easy cleaning.Equipment World

The other piece of technology related to power is Ford Intelligent Backup Power. Through the 80-amp wall box charger installed at your home, the Lightning Pro can provide up to 9.6 kW to power a home during a power outage. Based on average usage, the Lightning could meet a home’s power needs for up to three days or as long 10 days if power is rationed.

Not wanting to disappoint the definition of a Ford F-150 or a pickup truck, the Lightning has a 5.5-foot bed. Outside of the standard payload space, Ford opted to include some new capabilities that are unique to the Lightning. The truck comes with a giant storage compartment under the hood, where the engine used to be. Dubbed the mega power frunk, it can hold 400 pounds of weight and is equipped with a drain that make it easy to clean at the end of the day.

Check out this video of the Lightning Pro compiled by Equipment World from footage provided by Ford: 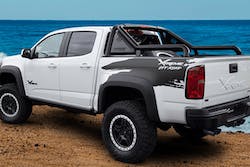 "A Pickup Truck on Steroids." A 750-Horsepower Chevy Colorado ZR2 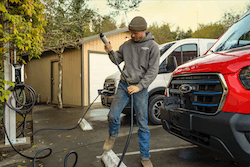 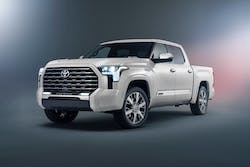 Toyota to Roll Out Flagship 2022 Tundra Capstone in Spring 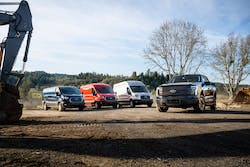