Some companies embrace technology. Some don’t. And many are somewhere in between.

Russ Young, chief business development officer at software company Tenna, sees four levels of tech adaptation for construction companies. These range from companies with a “don’t want it/don’t need it” attitude to those who pursue the leading edge of everything new in hopes of gaining competitive advantages.

Young recently delivered a presentation on the subject at the Association of Equipment Management Professionals' Connect22 conference. Titled "A Deep Dive into the Equipment Manager of the Future,"  Young outlined four technology philosophies and described the kind of improvements construction company executives and equipment managers can realize by moving to the next level.

This is the company that relies on a big whiteboard to keep everything organized. A rough estimate of the number of companies at Level One would be about 20% of the industry, says Young.

While the whiteboard style of equipment management works well for small companies, it can become “death by 100 cuts,” Young says. “They miss preventive maintenance windows all the time. Instead of doing a dime’s worth of prevention, they’re spending a dollar for a cure.”

For Level One companies, locating equipment in the field can be another huge headache requiring numerous phone calls, disputes and uncertainty. This wreaks havoc on production schedules. And at the end of a job, the accountants face a huge problem trying to accurately determine what machines to charge to the jobs. Worst-case scenario is that a machine might get stolen, and nobody would know about it for hours, days even.

The time put into finding and allocating equipment also adds labor hours and creates downtime in the field. Safety compliance is also neglected or easily fudged. “The good news is that there are fewer Level One companies every day,” says Young. “Most of them are taking advantage of some form of telematics and that has moved the ball forward.”

At Level Two, a company or fleet manager has modernized and digitized part of their processes, but typically they’ve been saddled with a bunch of different systems, says Young. He estimates about 65% of the market is at some form of Level Two.

Companies at Level Two may be trying to integrate data from different OEM telematics systems or keep track of handheld tools or non-powered equipment with proprietary tracking systems. And their telematics might not integrate well with office or project management Enterprise Resource Planning (ERP software) such as Vista, Spectrum, Viewpoint or Sage 300.

“Most of these systems don't talk to each other,” says Young. “People end up not really knowing what's going on, even though the data is there, because they don't know where it is or how to access it. You talk to the field people at a Level Two organization, and you will get a sense of their frustration.”

With multiple, non-integrated systems, it’s also difficult for the estimators, CFOs or owners to get the data they need without a lot of work. To plug this information into an enterprise accounting system may require manual entry — the antithesis of what automation is supposed to achieve.

“Here the owner doesn’t know what's going on and can’t make effective decisions,” says Young. “I hear CEOs say all the time, ‘I know my labor costs to the dime, but I have no idea of what my equipment costs are.’ At this point, the equipment manager’s job may have become easier, but he still hasn’t earned a seat at the executive table yet,” says Young.

The other, often overlooked challenge for a Level Two company is cyber-security. With multiple divisions running multiple software programs, the chances of suffering a ransomware attack are increased, says Young. The analogy he uses is that it’s easier to guard against a burglar if you have only one well-fortified door as opposed to six or eight lightly guarded doors.

With an equipment management platform that is machine agnostic and integrated with a company’s ERP systems, all the problems with Level Two go away, says Young. Data can flow seamlessly from the field to the estimators and executives to enable good decisions. Interdepartmental communications are fully visible. And the information comes in a form that allows all parties to be proactive instead of reactive, says Young.

Heavy/civil contractors typically spend about 20% to 25% of project costs on equipment, says Young. “One big equipment mistake can eat away a huge amount of margin. But if automation can drive a 10% reduction in equipment costs, that can translate into an improvement of margin of 2%, which drops right to the bottom line. So, if you’re a 6% margin company, and you can turn that into an 8% margin, that’s a huge difference." That’s also the kind of initiative that can earn an equipment manager a seat at the executive table.

Another benefit, not discussed enough, says Young, is how a seamless equipment management program can improve morale and employee retention across a company.

“Not only is your labor happier, more productive and more likely to stay, but we're starting to see folks joining companies because they can be more productive, and they are less frustrated,” says Young. They are not, he says, running around putting out fires all day.

On the hardware side, Level Four is a bit like science fiction, says Young. It can include robotics, assistive devices, autonomous vehicles, drones and reality- capture devices. “The equipment manager job is going to get more challenging, or at least more complex, as the industry moves in this direction,” he says.

“It's going to be very hard to manage those assets at Level Two. But at Level Three, you've built a foundation, where you can manage these much more effectively and efficiently and make the transition to Level Four without creating new headaches.”

When to step up

Not every construction business needs an integrated solution that ties equipment management between the field and the office. The prime target would be companies with annual revenues of $20 million and up. But that can vary depending on the company’s business and growth, says Young.

Companies with $10 million in revenue but a lot of moving parts (think electrical and mechanical construction) may be right, as would companies experiencing or planning for rapid growth, says Young.

“When companies reach $10 million in revenue, they have to think about getting off of QuickBooks and onto a more robust accounting system,” he says. That’s also when they need to start thinking about a system that integrates equipment management with project management and office needs. 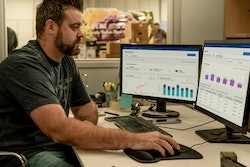 Ford Pro Enables Management of Your Fleet, No Matter the Brand 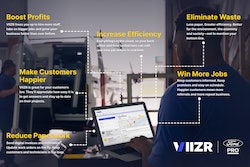 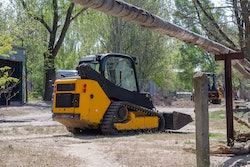