Dust Control: Know how your air filters work and how to change them to avoid big repair bills 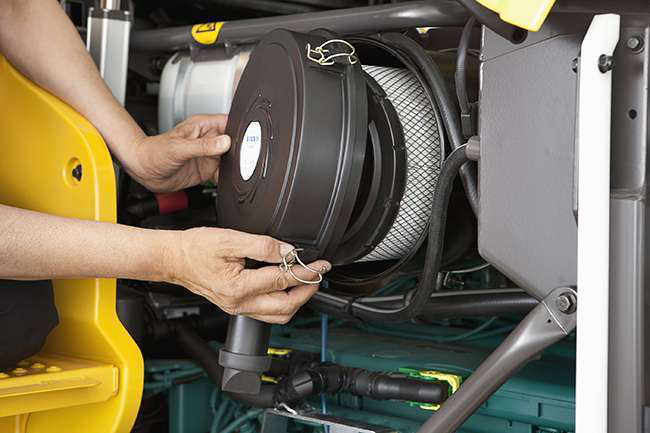 Diesel engines have a reputation as being bulletproof. Today’s models are no less durable than before, but due to changes in exhaust emissions technology, they also require extremely clean fuel and air to function properly. Fail to provide either and you could be looking at expensive repair bills.

With summer upon us, hot and dusty conditions prevail on many earthmoving jobsites. This demands close vigilance when it comes to airborne dust on the jobsite, but also maintaining a best-practices regime when it comes to your equipment’s air filtration. If the water truck breaks down or fails to show, your machines may be facing a huge increase in the amount of dust they must filter out of the intake air.

Dust contains silica, which if it gets into your engine, acts like a lapping compound. It is highly abrasive and when stirred into your lube oil, blown turbochargers or a dusted engine are likely results.

Many of today’s Tier 4 Interim and Tier 4 Final engines turbocharge high volumes of air to help with emissions control. Today’s turbochargers are precision components, says Dustin Croft, aftermarket sales manager, John Deere Construction and Forestry. “When you’re turning 20,000 rpms and all those tolerances are tight, if you have contaminated oil passing through, it can affect your turbo life. Keeping incoming air clean helps on both ends,” he says.

“Almost every piece of equipment has had to make changes to its intake system as a result of 2007 and 2010 on-road and Tier 4 off-road emissions regulations,” says Mike Anderson, director of product management at Donaldson. “If you look at the new emissions packages they almost all require more cooling capacity, and then with the aftertreatment, DPFs and SCR, there’s a lot of competition for space underhood. And some engines are going to higher air flows and higher horsepower, but manufacturers don’t want to give up any filter life.”

Most heavy equipment and trucks used in off-road conditions have a two-stage filter system. The smaller or inner element in these systems is a safety element, says John Gaither, director of heavy-duty engineering, Fram Filtration. It is only there to protect the engine in case of a catastrophic breach of the larger primary filter or in case you accidently expose the intake to a large amount of dust when changing out the primary filter.

“The safety element is more open (as a filter) than the primary,” Gaither says. Accordingly, you only need to change the inner element once for every three changes of the outer element, he says.

No schedules for air filter replacement

Another big misconception is that air filters need to be changed on a regular, hours-based schedule, like oil filters. “There is no reason to change the primary filter until it has reached the maximum restriction,” Gaither says. “Resist the urge to take it out and look at it. There is far more dust introduced on the clean side when you take the filter out than during the operation of the engine.”

Air filters actually work better as they get more use. “A dirty air filter is a good air filter,” says Anderson. When they are new, the openings in the filter fabric are large. As dust cakes on the surface of the filter media, these openings become smaller and the filter more readily sifts out the fine particles.

When the filter reaches maximum restriction a visual indicator will pop up on the filter or the housing, or if there is a sensor on the air intake system, you would get a notification on the control panel in the cab, says Croft. The sensors are wired to a light on the dash or an in-cab monitor. These can also be tied in with a telematics system to monitor air flow pressures remotely, he says.

Once you do have an indication that an air filter has reached maximum restriction, Anderson recommends cleaning the outside of the filter housing first, removing the primary filter and cleaning the inside surfaces and the seal tubes with a shop rag.

Years ago it was common practice for operators to remove their air filters and clean them. Some used compressed air, some used a wash system; and as a field expedient technique some would just bang the filter on the side of the machine to knock the dirt out.

Today this is not recommended for two reasons. “First, you reduce the effective future life of that filter by 20 to 40 percent every time you clean it,” Anderson says. “Second, you increase the likelihood that you’re going to open up holes in the media and that’s going to give dust a direct line to the engine or the safety filter. It’s putting a major piece of equipment at risk.

“We’ve done enough testing to know that there is no safe cleaning method out there, no matter what the method is,” Anderson says.

Precleaners to the rescue

For off-road equipment in dusty environments a precleaner of some sort is a must. Precleaners work by spinning the incoming dust in a circle. The heavy particles migrate outward and are ejected from the intake air or fall into a trap of some kind.

“Precleaners will remove somewhere between 70 and 96 percent of your incoming dust,” Anderson says. “That will increase your filter life five-to 20-fold. They are the workhorse of the air intake system, especially for off-road equipment.”

Once your filter reaches maximum restriction, you may not notice a performance change at first, but most modern engines will eventually start to derate. At the next stage the engine could force you to limp the vehicle back home. The engine does this to protect itself from further damage.

Should your air filter system suffer from a pinhole in the media or a leak somewhere, the first place you’ll likely find out about it is from your scheduled oil sample. Make sure the oil sample service you use checks for silica. If it’s out of the normal range, that’s a sure indicator that you have a leak some where in the system.

The old style filters used an axial seal with a foam gasket that had to be compressed against the housing to make an air-tight seal. Today’s air filters use a radial seal made from polyurethane. These give you multiple seal surfaces and do better in high vibration applications, Gaither says. Manufacturers still produce the axial style filters, but mostly for older equipment. And there are kits you can buy to convert the older style filter mounts to the radial seal design if you need that extra level of protection.

The filter media itself is also evolving with more use of synthetic blend materials. Thicker media give today’s filters greater capacity. “The larger dust particles are trapped high in the nap and the smaller particles go deeper to progressively smaller openings,” Gaither says. “That gives the filter the ability to hold a lot more contaminant.”

Filters in heavy-duty applications also tend to have some sort of pleat locking mechanism to make the pleats stand apart and remain rigid. “You want to avoid pleat flutter,” Gaither says. “It doesn’t provide a good environment to hold the contaminant you’ve already trapped. A moving pleat allows pores to open and close, and it may ultimately abrade the media.”

As the velocity of the air going through the media increases, the need for pleat stabilization goes up with it. A normally aspirated diesel engine in most cases is fine without it. But you put a turbocharger or a supercharger on it and your airflow can increase 60 percent. Pleat stabilization technology has become common, says Gaither, and has even crossed over into some automotive applications.