Isuzu has added Class 4 brawn and performance to its popular medium-duty cabover truck stable at Class 3 pricing and operating costs.

The new truck is a base model NPR cabover, able to accommodate a 20-foot body and weighing in at 13,000 GVW. According to Mike Kennedy, Isuzu’s national sales training manager, the NPR, like all Isuzu trucks, was designed with lowest cost of operation foremost in mind.

That thinking led to the new NPR design, which cracks into the lower end of Class 4, complimenting the heavier, 14,500 pound GVW, NPR HD and the also-new 16,000 pound NPR XD model, which debuted earlier this year. Isuzu’s medium-duty lineup tops out with the NRR model, which checks in at 19,500 pounds GVW.

Building on its low-cost-of-operation theme, Isuzu engineers elected to spec the new NPR with a 3-liter, four-cylinder diesel putting out 150 horsepower and 282 pound-feet of torque. Isuzu began spec’ing lower displacement engines into its medium-duty line a few years back as fuel prices rose and fleets became more concerned about fuel economy.

The NPR’s powertrain, complimented by a capable, 6-speed Aisin automatic transmission, builds on that trend.

“For many years, U.S. [customers] were obsessed with horsepower, and over-spec’d trucks were commonplace,” Kennedy explains. “We’ve proven that a properly configured truck with a properly spec’d powertrain can deliver more than enough power and capacity to work hard while delivering low cost of operation. We have trucks in New York City fleets today, for example, running at 6 cents per cost of mile. We’ve proven that ‘tough and durable’ doesn’t have to be at odds with ‘economical and efficient.’”

Isuzu offered us an exclusive test drive of the new NPR, routing out of its Orange County, Calif. headquarters, on a 200-plus mile run that included interstates, mountains and urban driving.

At highway speeds, it was quickly obvious that Isuzu has made numerous upgrades to its cabover lineup. The steering system has been tightened up; even at 70 mph, the NPR held a dedicated line without wandering around in its lane.

Of course, at low speeds and in tight maneuvering conditions, that same steering system works so well that Isuzus are actually great fun to whip around in tight spaces: These trucks have always offered insanely-great wheel cuts, turning radiuses combined with unsurpassed forward and side visibility. Late in the day, on a tight oceanfront road, I was able to make a u-turn in the NPR in one sweep, without so much as brushing the curb on the opposite side of the lane.

Isuzus have always been practical, no-frills trucks, but its engineers have added some useful extras: safe and secure steps and grab-handles are paired with cab doors that open a full 90 degrees to insure safe entry and exit in and out of the truck. A tilt/telescopic steering wheel is standard, as is a center-seat-mounted fold-down work station and a new, Multi-Information Driver Display screen in the center dash cluster. Additionally, drivers can now adjust both main mirrors, as well as their convex mirrors from the driver’s seat with two electronic controls situated up and to their left near the A-pillar. 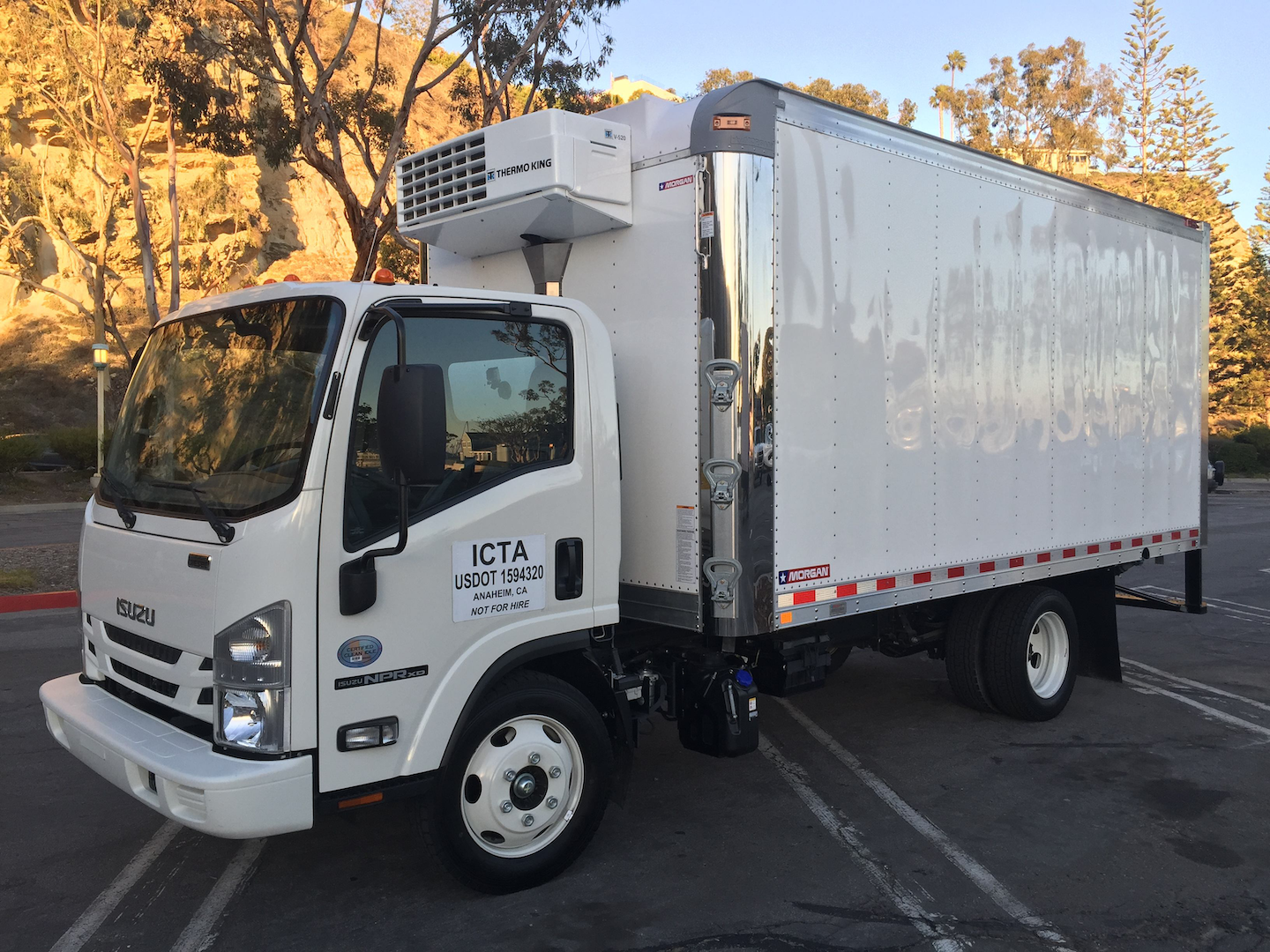 If you’re still using one of Isuzu’s early model NPRs, and given their reputation for longevity you very well may be, the Japanese medium-duty workhorse has a few surprises for you in its current-generation work truck.

The 2016 NPR XD follows the first-generation model introduced this year. Mike Kennedy, Isuzu’s national sales training manager, says the company is excited about the product because its 16,000 GVWR fills a “phantom gap” between the 14,500 GVWR NPR HD and the nearly 18,000 GVWR Isuzu NQR.

The truck features a body/payload allowance of about 9,500 pounds. Our test unit was upfit with a 16-foot Morgan body with a Thermo King reefer unit, but the model can accommodate bodies up to 20-feet in length.

The 150-inch wheelbase truck featured a turning radius of 46.5 degrees, which came in handy navigating crowded streets dissecting some of California’s surfside towns. The truck is also available in 109-, 132- and 170-inch wheelbase lengths in standard cab configurations, and 150- and 176-inch for crew cab.

The 215 hp powerplant provided more than enough power to push the truck at highway speeds and up some aggressive grades. The 452 foot-pounds of torque were impressive. Kennedy says the Aisin transmission used in Isuzu’s commercial lineup is actually capable of handling far more torque than the truck can provide, extending the life of the vehicle’s driveline.
Steering gets a major boost from early-generation Isuzus. It’s easy, comfortable and tight. Ambient cabin noise across the entire lineup has been reduced immensely. Doors and windows are sealed tight and there’s hardly more engine and road noise inside the three-person cab than you would find in a passenger vehicle.

The NPR XD’s visibility is supreme. Oversized windows and a massive windshield are key highlights, allowing drivers to see practically every obstacle that may pose a safety hazard in front of the truck before it’s too late.

The exhaust brake was very responsive, but I found the front disk and rear drum brakes more than capable of handling the job, so I turned it off.

Isuzus are known for their practical, no-nonsense approach to vocational use, but current generations have been given a few comfortable upgrades. Cab doors open a full 90 degrees, making egress in and out of the truck simple, and there are ample grab-handles for drivers and passengers who may need a boost.

A Multi-Information Driver Display screen is mounted in the instrument cluster. Our test unit featured heated and remote mirrors that could be adjusted from the driver’s seat via two electronic controls mounted in the A-pillar.

The steering wheel features tilt and telescopic capability, a standard on all Isuzu models, and I thought there was ample storage space behind the seats for small personal items. The trucks can be outfitted with an optional fire extinguisher and triangle kit, both of which would be mounted behind the seats.

A three-person crew could travel comfortably in a standard cab unit, but if you don’t have a middle passenger, that seat flips down to reveal a work station.

With a market share hovering just south of 90 percent in their segment, it’s easy to see why Isuzu trucks are more popular than ever with vocational fleets. The work truck stalwart is simply in tune with the demands of the modern customer and how to provide them with an efficient tool for work.