Mastering asphalt plant production is all in the details 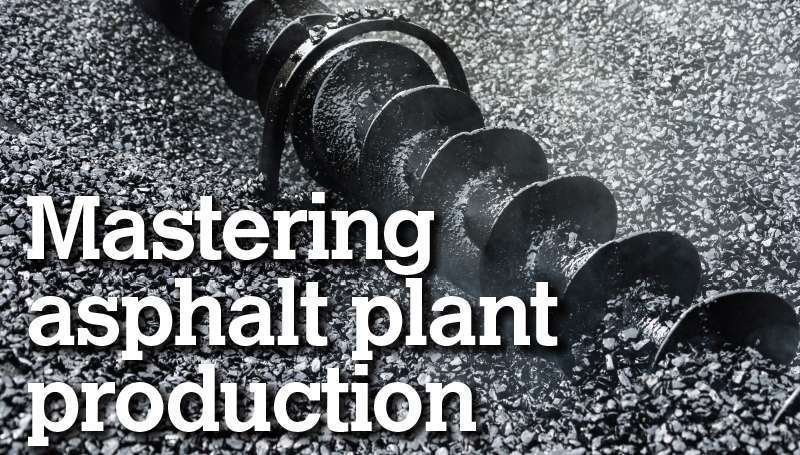 Producing your own asphalt mix is more work than just simply combining binder and aggregate. Proper plant operation and key personnel make all the difference in quality pavements.

The materials may be right. The correct asphalt cement (AC) or binder content, the right aggregate size, all matched to the state DOT or local municipality spec for a base, intermediate or surface course. But somewhere in the process something failed and the lift is segregating.

All the corrective work and up-the-sleeve tricks a paving contractor can muster will never be able to produce top-notch asphalt pavements if the mix isn’t being produced right. And if a contractor is producing the mix from his own plant, he has no one to blame but himself.

Greg Renegar, senior vice president of engineering for plant manufacturer Astec says truck loading is one of the most common mistakes he’s come across when it comes to problem asphalt mixes.

“The easiest way to screw up perfect mix is by getting sloppy in how the trucks are loaded from the mix silos,” he says. “Some mixes, due to the amount of AC and/or the gradation of the aggregate, are prone to segregation.” 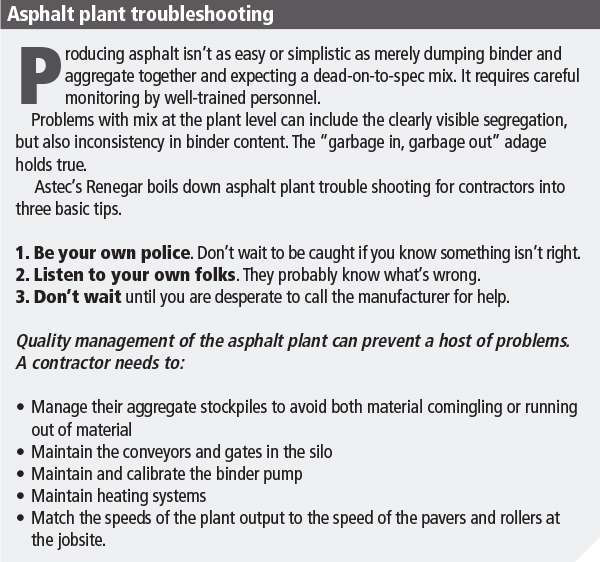 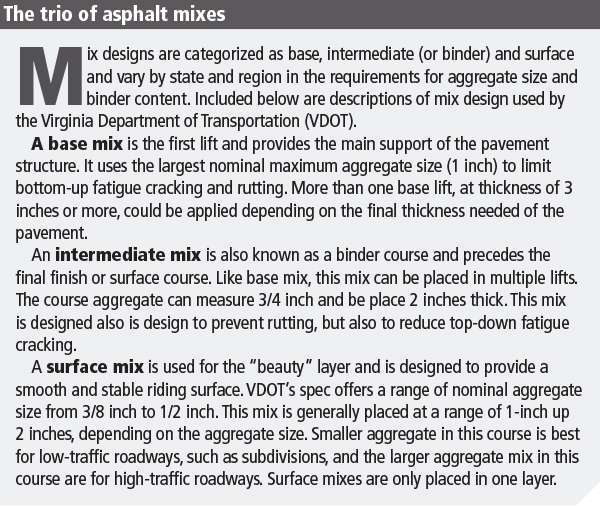 this segregation, in which the large aggregate in a mix goes one way, and the finer aggregate goes another, results in nonhomogeneous mix. “On the road there will be localized spots where the gradation of the mix is such that it cannot withstand the traffic loads or weather conditions,” he says. “These places will become potholes.”

Smart contractors, Renegar emphasizes, will focus on truck loading to avoid this. “I have seen truck scales with a large ‘ruler’ mounted alongside the truck scale so that truck drivers could be trained exactly where to stop the truck,” he says. It’s a far better option than waiting to be caught putting down bad mix, he adds.

The most successful plant producers are akin to top-performing sports teams, Renegar says, in that they are successfully year-in and year-out by focusing on the fundamentals. He says one way to do this is having personnel who have bought into the process of making asphalt.

“These contractors have employees who take a lot of pride in what they do, in part because they feel that they are part of an organization that will take care of them if they do their job well.” he says.

Renegar recently visited what he describes as a “very successful” company in California, spending several hours talking with the employee responsible for maintenance of several large plants.

“He went on and on about how great his company was and how lucky he was to be able to work there because they let him basically try anything he wanted with respect to improving the plant operation,” Renegar says. The employee was appreciative that he had the freedom to make improvements, and spent much of his energy making the company more profitable.

So how does that affect mix quality? When all aspects of the plant are operating properly, the plant can make a high quality product and do so consistently, Renegar says.  If the operator is constantly trying to overcome plant deficiencies, the mix properties can be inconsistent. “If the mix is inconsistent coming from the plant, the performance on the road can also be compromised,” he says.

Cliff Mansfield of C.M. Consulting in Odell, Oregon, has been working in the paving industry for more than 40 years and travels the world installing and repairing asphalt plants, as well as training personnel how to use them.

For contractors looking to invest in their own plants, he offers a series of considerations including the type of plant, portability and size. 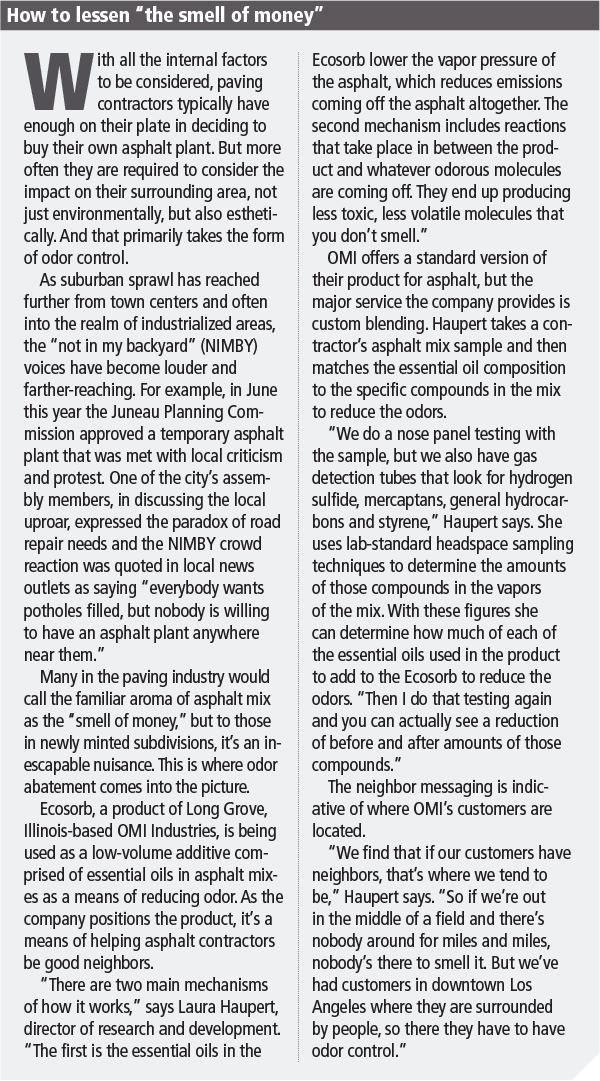 The two main types of asphalt plants include batch and drum, and the decision on which to choose depends on a contractor’s needs, he says. For example, batch plants are good for contractors who need to change their mix frequently, or those who need to stop and restart frequently through the day. A drum plant is best for contractors who produce the same mix design continuously and for longer periods of time.

Batch plants also are generally more expensive to operate and maintain than their drum counterparts, and have more moving parts to contend with, making drum plants a more simplistic option.

Portable plants, Mansfield says, are more expensive than stationary plants, but make more sense if a contractor needs to move locations a few times a year, for example. But even with a stationary plant, which may need to be moved every few years, he recommends contractors choose equipment mounted on skids with wiring setups that can be moved and changed out easily.

For selecting plant size, Mansfield recommends contractors size the plant to meet the average need of the busiest month, rather than matching it to meet the need of their biggest production day. That way a contractor isn’t overspending and paying for too much equipment than necessary. The leaner the better, he says.

“If you don’t own your own plant, you’re obviously limited to what kind of scope of work you can get,” Cosper says, explaining ownership includes many big picture ramifications.

Cost is the main factor, both in the upfront cost of the equipment and the eventual savings for a contractor in producing his own asphalt. There’s also a production oversight element to ownership. Cosper says: “It’s a control factor in being able to decide who’s going to get what mix today, and when, versus always being at the mercy of somebody else producing the mix. It just allows you to have a bigger footprint.”

Cosper adds plant ownership can turn a contractor into a supplier for smaller operations. “There are a lot of people out there that do driveways, and small commercial guys that buy FOB (freight on board). We’ve got a lot of good customers that operate that way.”

And there’s great responsibility in continual training he says, adding that key operational personnel need to attend manufacturer operator schools that cover the basics of operation as well as mix designs. “And when you have an issue, you can rely on customer service with the manufacturers. They’re very good in that respect,” he says.

But Cosper adds a bit of caution to the smaller operations looking to go big overnight with a plant purchase.

“Just like in the housing boom, people that couldn’t afford to get a house still could get financing, and that’s certainly the same way in this business,” he explains. “You don’t have to be the brightest bulb down the hall to go put together a deal. It can be impactful on the market ,if you get an inexperienced person pulling that lever. Someone who really doesn’t understand the overall cost structure can make a big mess in the market.”