Caterpillar’s latest unveil has nothing to do with horsepower or fuel efficiency. In fact, the latest piece of equipment from the company doesn’t even have an engine or wheels.

But it’s still all about productivity in harsh conditions.

During the Mobile World Congress show in Barcelona, Spain this week, CAT unveiled its super-rugged B15 smartphone. Don’t expect this Android-powered device to get confused with an iPhone, however.

Rather than boasting a delicate design of thin lines and chamfered edges, this beast takes its cues from CAT’s heavy equipment, dressed in anodized aluminum and shock-absorbent rubber. (And I’m absolutely in love with that rear backing design. How cool is that?)

Thanks to its tough exterior, the device has an IP67 rating — military spec. That means its waterproof, dustproof and will survive a 5.9-foot drop to hard concrete. The device can also operate in temperatures ranging from 122F to -4F.

So, the B15 might be the thickness of two iPhones stacked on top of one another, but an iPhone doesn’t have nearly as many lives as the B15.

The device runs Android 4.1 — not exactly the latest version of Google’s operating system, but just one generation behind. You’ll also have full access to the Google Play app store.

The B15’s 4-inch display isn’t exactly as sharp as HTC’s 1080p Droid DNA, but at 800 x 480, the resolution is more than serviceable on the jobsite. More importantly, the display is protected by the very durable Gorilla Glass to protect it from drops and scratches. You can even use this touchscreen with wet hands.

Internal specs aren’t necessarily of the latest variety either. It likely can’t push the latest and greatest video games, but the dual core, 1 gigahertz processor and 512 megabytes of RAM are more than enough for any apps needed on the job

As far as price goes, the B15 is very reasonable for fleets. The announced prices in Barcelona (assumedly there are two models) were £299 and €329 or about $437. Those are off-contract prices and much cheaper than the $600 or so most smartphones cost without a carrier contract.

The Caterpillar B15 will be available here in the U.S. in April and in March in the Middle East and Europe.

CNET has done a great hands-on video with the B15 that we’ve embedded on the next page. There’s an ad at the beginning, but it’s well worth waiting through to get to the video. 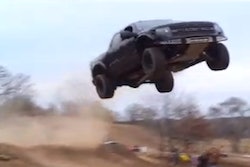