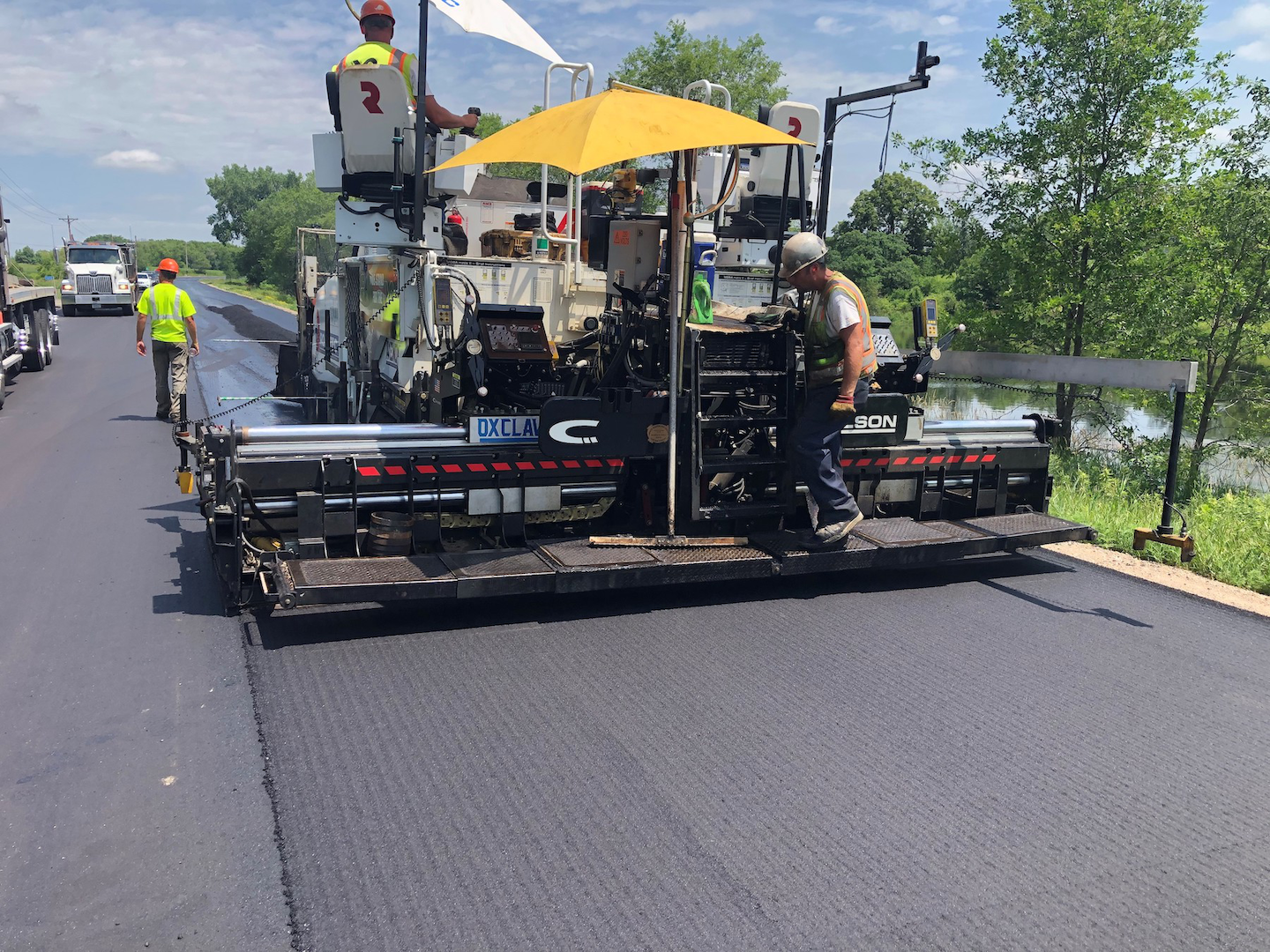 For years, Stuart and Michael Frost dreamed of a better screed.

“The one thing that’s never changed in our lifetime, or my dad’s lifetime for that matter, is the basic screed,” Stuart Frost says. “… So my brother and I just started toying around with the idea of trying to do something better.”

The two brothers have worked on paving crews since they were kids. They started with their family’s business, and for the past 20 years, they’ve run their own highway paving company, Mountain Construction in Powell, Wyoming.

“We’re field guys and hot plant asphalt operators and screed operators ourselves,” Frost says. “We know all the aches and pains of paving and problems with paving.”

The two main problems they’ve wanted to solve were how to get better density behind the screed and an easier, faster way to change screed plates. They believe they have solved both problems with a new screed plate design and attachment system. Two other family-owned paving contractors, who have been using the new screed plates in their areas of the country with a variety of materials, agree.

“It’ll change our industry for the better, no doubt,” says Travis Shilling, vice president of Shilling Construction in Manhattan, Kansas.

“I think we’ve got a solution to not only keep us in the bonus the entire time, but it could potentially be the new way of paving,” adds Brent Carron, vice president of Valley Paving in Shakopee, Minnesota.

“What we’re consistently seeing is a much denser mat,” Frost says. At the same, they can maintain normal paving speeds as compared with tamper bar screeds that require slower paving, he says.

They back up their comments with videos and photos posted on social media. They’re working with their state departments of transportation and planning official tests to put some hard data to their observations. The Frosts have a test of the screed plate planned with the Federal Highway Administration on an upcoming job.

While inventing the new screed plate, the brothers also developed a system for attaching their plates, one they say that takes two to three hours to install instead of two to three days.

“Anybody that’s had to go change screed plates all their life is going to love that in itself,” Frost says. “It’s a miserable process, believe me.” In the winter of 2018, the brothers had a breakthrough. They envisioned a sine wave concept as opposed to a flat screed plate.

The asphalt mix would travel from the top of the waves down through a gradually widening channel, like an upside down funnel. The design would add a lateral movement to the process instead of just vertical downward pressure.

“Once we came up with that notion, it just kept making more and more sense to us,” Frost says.

Then the testing began.

“My brother and I kind of set up a little mad scientist lab in our airplane hangar and started creating some of these patterns out of moldable materials that we could test,” he says. “It was showing promise like we’d hoped.”

In the process of achieving the right pattern for the screed plate, they encountered a problem. “The problem was, how do we create this crazy texture on a screed plate economically or feasibly,” he says. “The only obvious answer would be to cast them.”

Being able to cast the screed plates also provided an opportunity to use materials more wear-resistant than steel. The brothers used a 26 percent chromium carbide cast.

The screed plates are held in place on the conductor plate by high-temperature silicone cord that is stretched and slipped into a taper lock on the back. Frost says that when you release the cord it sucks the plate in tight, and then lag screws are added on the sides. The new system provided a much faster way to change the screed plates.

The brothers were awarded two patents in December 2018. They call the textures on the screed plate Oxclaw and the connection system Bullox. They market the products through their company Axenox.

In Fall 2019, they put their new inventions to the test. From left, Stuart and Michael Frost, owners of Mountain Construction in Wyoming and Axenox, say their new Oxclaw screed plate invention is achieving 85 to 89 percent density right off the screed with some mixes.

On their first job, a 42-foot-wide street for the city of Powell, the brothers used the plate system on the Carlson screed. They had planned to use it only on the bottom lift, but they soon changed their minds.

“It was such a success, we paved the whole thing,” Frost says. “It was obvious to us at that point we had something special.”

Instead of the aggregate swimming to find its place in front of the rolling, the kneading action of the screed provides a stable mat so the rollers just have to press it down, he explains. It’s requiring less roller action, and the longitudinal joint is staying contained and straight and has better density.

“And what we’re seeing is just what we were hoping would happen,” he says. “The aggregate is kind of forced to find its place in the mat at the screed.”

Density gauge readings are coming in at 85 to 89 percent compaction right off the screed with some mixes, Frost says. “More importantly, the mat is much more stable, allowing us to get more density while still hot with less shoving and check cracking.” They’ve since used it on other projects, including one for the Wyoming Department of Transportation and one for the FHWA.

The Oxclaw and Bullox are also getting some attention on social media. Kim Wilson with Axenox shared a 30-second video on the Paving Nation Facebook group. In the video (shown below), Frost steps off the back of the paver as it is laying the mat, and no footprint can be seen.

“It was a full-time job trying to keep up with the comments and answering the questions about it,” Wilson says. “It’s just basically promoted itself.”

As the online discussion continued, one concern kept popping up about the finished pavement. In the photos, thin, longitudinal lines appeared. Some commenters questioned whether the pavement was smooth.

“It’s actually a smooth surface, but it leaves a little shadow, and in photos, the shadowing is exaggerated,” Wilson says. “And the biggest thing that we get … they want us to prove it’s smooth.”

“It is smooth,” Frost adds. “And we appear to be getting a better ride.”

A shadow, but no doubt A Shilling Construction paving crew uses the Oxclaw screed plate system on a recent job in Kansas. Travis Shilling says the pavement is smooth, and the lines are just shadows that are more apparent on cloudy days.

Travis Shilling was one of the first to comment on the posts about the new screed plate.

“When I saw it, a light bulb went off. That makes total sense to me that it would get better density right behind the screed,” he says. “Man, why didn’t I think of that?”

The 55-year-old Shilling Construction likes to be at the forefront of new innovations, he says.

He texted and talked with the Frosts through the winter. He decided to install the system on a new Cat AP1055F paver with an SE60 V screed. The Oxclaw and Bullox system arrived in April. The local Cat dealer installed it on the screed with guidance from the Frosts via Zoom meetings, Shilling says.

So far, Shilling has primarily used it on large parking lots, including for the local airport and a school. One of the projects on a parking deck required tight turns around multiple medians, not a market the Frosts had initially targeted. But they were pleased to see the screed plate designed for road and highway work was achieving the same results on jobs requiring multiple in and out turns.

“On the parking lots, the first base lift was a 4-inch lift, and normally if you walk across that, you’re sinking in pretty good,” Shilling says. “And with the Oxclaw, there’s minimal indentation when you’d walk across it. You can really see that the density was far more than with a conventional screed like we’re used to.”

The positive results occurred on the later lifts, as well. He said he has achieved full density on his projects.

The shadowy texture of the pavement was also present, but the mat is smooth, he says. “It’s just a different look. It looks like it’s rough in texture, but it’s really not.”

The Kansas Department of Transportation has been out to look at his jobs. Shilling will test the screed plate on a KDOT four-lane divided highway project on K18, from Manhattan to Interstate 70. The plan is to pave two lanes with the Oxclaw and two lanes with a conventional screed to compare results.

“So far from talking with them, they’re really pumped about it,” he says of KDOT. “They know the benefits of getting more compaction initially from the screed and less hammering on the mat with the rollers.”

‘Have to see it to believe it’ The next contractor to try out the new screed system was Valley Paving in Shakopee, Minnesota.

Brent Carron met some resistance from his crew, which was accustomed to winning awards from the National Asphalt Pavement Association and was skeptical of the strange looking screed plates.

After one job, they became believers, he says.

“So the first day that we did this, we achieved anywhere from 95 to 96 (percent) density across the entire mat on all of our courses,” he says. “So that is phenomenal.”

He says his crew now doesn’t want to use anything else. After about two months with it, they’ve used it on about six projects.

“We’ve put about 45,000 tons through it so far,” he says. “We’re using it on city streets. We’re pulling approaches with it. We’re paving a driveway with it today. It can be used in all sorts of applications.”

He’s hoping to test it on the company’s upcoming project with the Minnesota Department of Transportation to pave a section of Interstate 94 from Minneapolis to St. Paul.

“It’s one of those things where you have to see it to believe it,” he says.

That, says Stuart Frost, is the next step: getting DOTs, equipment manufacturers and others in the asphalt industry to check out and test Oxclaw and Bullox.

“We want to prove it, test it,” he says. “We already know now that it appears to be good for the industry, but we want to find the strengths and weaknesses and make sure everything’s covered before it goes to market.”

In this video by Valley Paving, a worker walks across a new mat created by the Oxclaw and Bullox system:

In this video, Valley Paving shows the knockdown first roller on a new mat created by the Oxclaw and Bullox system: 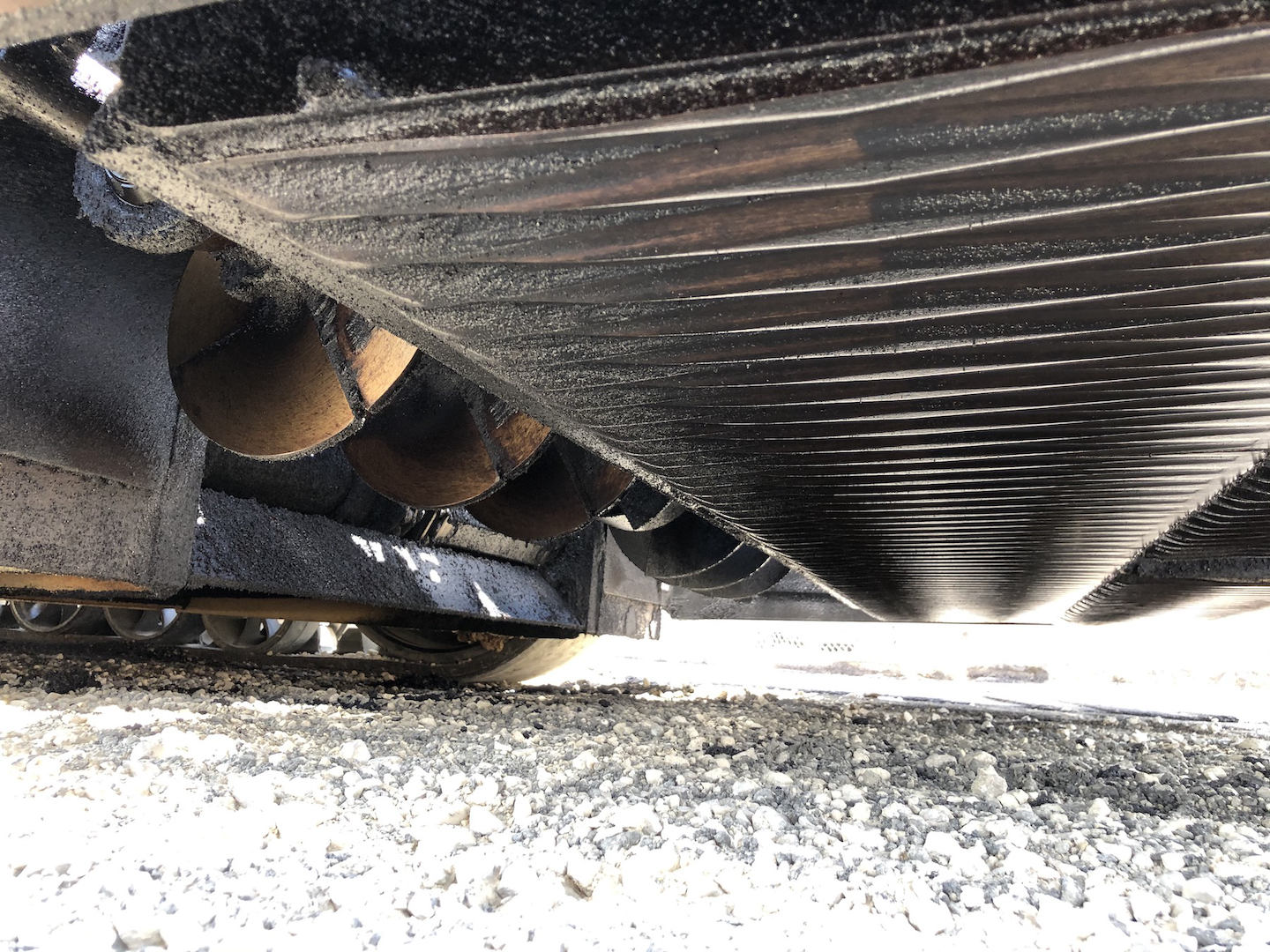 The Oxclaw screed plate, as seen on the bottom of a Shilling Construction paver.