When my wife an I finished putting together Volvo and LEGO’s EW160E wheeled excavator set, I couldn’t stop looking at the thing. First of all, I’ve never put together a LEGO set with so many tiny pieces. Second, the thing was just so wonderfully detailed.

And then I saw the monster in the video below. Now, all of the many hours I’ve spent stacking tiny bricks into approximations of heavy equipment and Star Wars starfighters, seem sort of elementary.

This amazing 1:24 scale build was done by Dawid Szmandra. According to the description of the video posted to YouTube, Szmandra says this 24-foot-tall custom build weighs 60 pounds and has nine motors, seven light sensors and even a touch sensor.

Obviously, this isn’t a set you can just go out and buy, (I don’t even want to begin thinking about how much it would cost, since the comparatively minuscule Volvo excavator set went for ~$300) but Szmandra says the build is 99 percent LEGOs. What’s not LEGO? 3D “PRINTED pulley wheels, stickers, strings etc. and 5kg of lead.”

He even managed to build the slewing ring in the base of the crane 100 percent out of LEGOs, using the heads of LEGO minifigures as bearings.

And though the detail to this build is amazing, the coolest thing about it is that it can lift some pretty heavy objects. Szmandra put together a controller (out of LEGOs naturally) that allows him to monitor total load and other machine data. In the video below, you can see this tiny LR 11000 move around and even lift and transport a chair. The video also captures some pretty amazing detail shots of how the pulley system works. 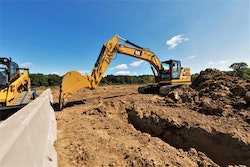 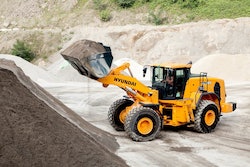 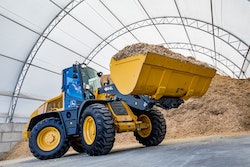 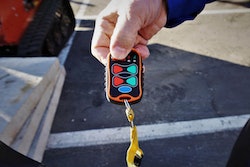