Update: We have updated the article to include comment from Ford below.

From the outset, quite a few folks have questioned the durability of the 2015 Ford F-150’s aluminum body. That was obviously something we wanted to ask folks in our industry about to which they replied with the exact opposite response. The construction professionals we talked to said years of experience with aluminum dump truck bodies had long reassured them of the metal’s toughness. Rather, they were more worried that when the new F-150 does get a pretty good ding, that it would cost more to repair.

The folks at Edmunds took a more direct approach to answering these questions. As soon as they could, they slapped down $52,000 for a new F-150…and then took a sledgehammer to it. And not just any part of the truck, one they knew would prove especially tricky to repair. And if we’re being honest, one that has a pretty good chance of taking a hit both on the jobsite and in a parking lot.

“After much thought we chose to smash the bed side because it would need to be repaired, as opposed to a dented door, fender or hood, which could simply be replaced,” reads one of the posts chronicling the website’s findings. Watch the sledgehammer carnage below.

As you can see in the video, after two hits, the truck comes away from the ordeal with some tennis ball-sized dents and pretty serious creasing in the panel around the dents. It will definitely need replacing. And when the Edmunds folks took it to their Ford repair shop they were told that while they had the training to do the repair, it “would be much harder to fix than steel,” because it “required special tools and would take extra time.”

The good news is they received the truck back from the shop almost good as new, so Ford has trained their shops well. The bad news? The bill totaled $2,938.44. And $887.25 of that was for the F-150 Lariat’s LED taillight with blind-spot sensor. (The standard taillight would have only run $106.28.)

The quick gist of this tale is, unsurprisingly, the lion’s share of this big bill was labor. But here’s the kicker, the manager at the shop told the editors at Edmunds that he had cut them a deal on labor: $60 per hour rather than the normal $120. At the normal rate for labor, Edmunds estimates the repair bill would have totaled $4,138.44—a difference of $1,800 over the cost of repairing the same spot on a 2014 or older, steel-bodied F-150. And that’s despite the fact that the aluminum panel being replaced costs the same amount as its steel twin—just south of $1,000.

Beyond that, Edmunds has concerns about insurance costs going up for aluminum repairs due to all the worries about the metal voiced in the last year or so. You can read the site’s full take on the repairs here.

Update: Ford spokesman Mike Levine gave us a call this morning and said the experience Edmunds editors had with their local body shop is not the same experience F-150 owners should expect.

“Based on that story, that repair time should have taken 10 hours, not 20,” Levine said. He said the 10-hour repair time is based on aluminum repair data going back to 1997, the year Ford began using an aluminum hood on the F-150.

Without doing the math, cutting labor time in half would significantly decrease the repair bills, with and without the labor discount. “Plus, if you have that type of damage, you’re going to go through your insurance company and you certainly wouldn’t be the one negotiating labor rates. That’s why you have insurance in the first place,” Levine said.

And as far as Edmunds’ concerns over insurance rates, Levine pointed to a message board thread of new F-150 owners relating their experiences with monthly premium increases and decreases. A couple have seen hikes as high as $50, while others have actually seen their premiums drop $20 or $30. Most in the threat have seen an increase between $5 and $12. 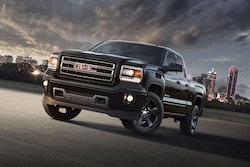 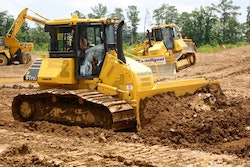 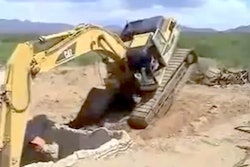 Excavator attempts a crane’s job, faceplants into a hole