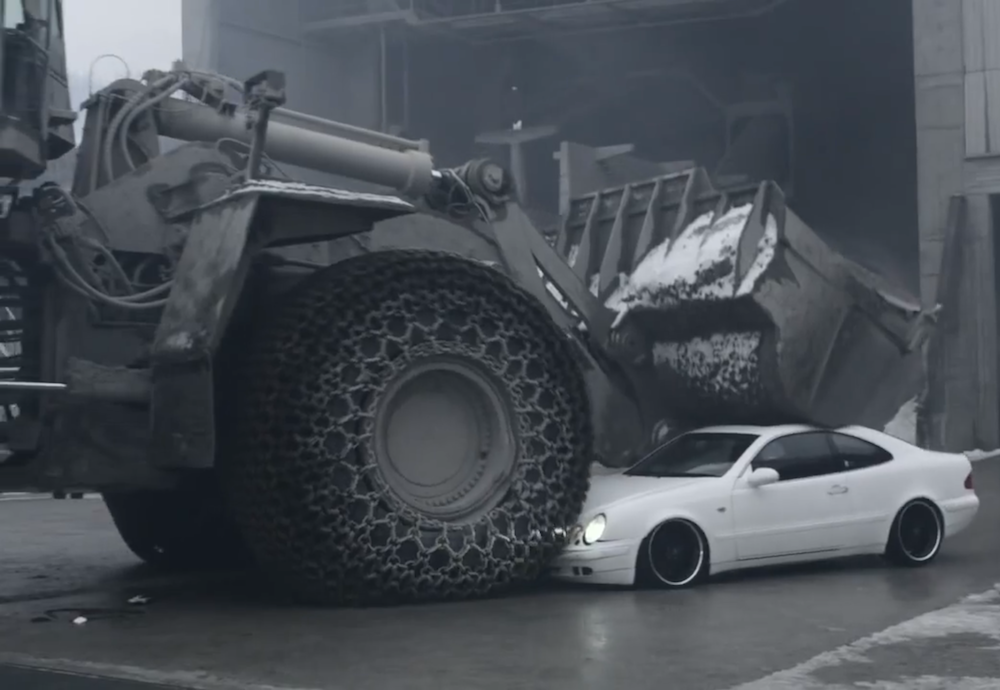 Heated disputes happen at construction and mining sites all the time. Even the coolest of characters can get into a serious disagreement when it comes to very expensive and very precise work.

But this one, particularly its resolution, brings “heated” to a whole new level.

In the video below a TV interview at a jobsite in Switzerland is interrupted when a large wheel loader all of a sudden starts pushing around a Mercedes CLK parked nearby. (You can skip ahead to the 1:30 mark to save yourself a lot of conversation in Swiss-German.) After a few shoves, the loader operator finally lowers the hammer—er, bucket—and easily crushes the luxury sedan before driving over it for good measure. According to the video description and various of other postings around the web, the loader operator was taking out frustration with his boss on his boss’s car.

The veracity of the video has been called into question by more than a few commenters on YouTube and elsewhere on the Web. The most common complaint is that there doesn’t appear to be an engine in the CLK, meaning that the whole thing was a setup. Others claim there should be a lot more fluids coming from the car after being crushed while still others ask why the headlights are able to turn on after the car is as flat as a pancake.

Beyond those legitimate critiques, it is admittedly a bit convenient that the CLK is parked so close by during the interview. However, others have argued that the sheer weight of the loader could easily have smashed the CLK’s engine as flat as the rest of the car. And, typically, in these videos where heavy machinery crushes a vehicle, the car or truck being crushed is ratty and obviously a beater the crew had lying around. But this CLK looks in great shape. Heck even if there’s no engine in it, the body of the car has to be worth something, probably those wheels too.

Personally, I think both sides make good points, but I want so badly for this to be true that I lean that way. Unfortunately, we haven’t been able to dig up a source on the web to confirm or deny the video’s authenticity.

But what do you think? Did this TV crew capture the ultimate end to a workplace disagreement? Or was it a stunt. Watch the video above.