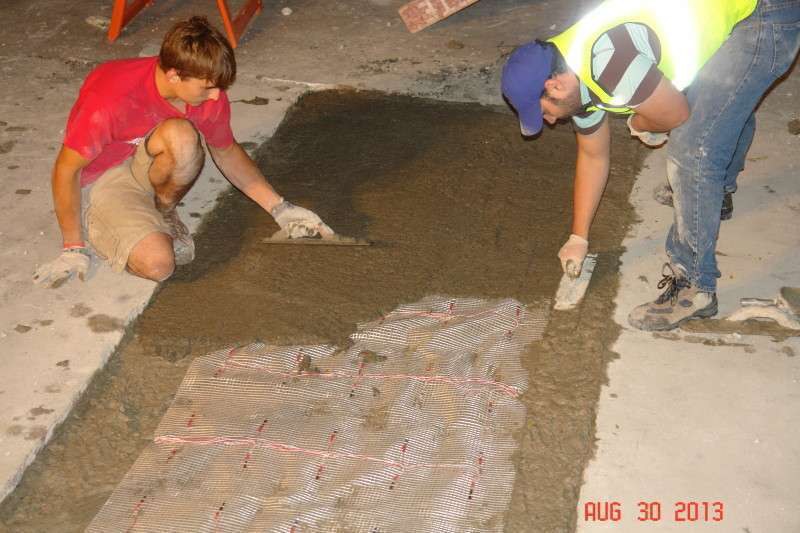 Students at the University of Wisconsin-Milwaukee install a slab of a new waterproof concrete atop data-gathering sensors. Credit: UWM

A new concrete developed by a graduate student and professor at the Univerity of Wisconsin-Milwaukee could greatly increase the lifespan of heavily traveled roads and bridges.

The formula, known as Superhydrophobic Engineered Cementitious Composite (SECC), was developed by UWM civil engineering graduate student Scott Muzenski and created in a lab with the help of associate professor Konstantin Sobolev. This new concrete actually repels water, solving one of the common material’s biggest weaknesses.

As water pools on concrete, it seeps below the surface where it freezes and expands, splitting the material and causing cracks on the surface. As more water seeps in and the now-weakened concrete continues to be traveled over, cracks spread throughout.

But, as Science Daily reports, this new formula features additives that create a “spiky surface” at the molecular level when the concrete hardens. This causes water to bead up and roll off. In the video to the right you can see the concrete in action. The water seemingly bounces off the surface.

SECC is also a more flexible concrete, allowing it to bend more than normal concrete without breaking. Strong polyvinyl alcohol fibers are mixed into and bond with the concrete. Whenever the start of a crack begins, these fibers keep it from spreading.

And while the new concrete resists large cracks, it actually is designed to allow lots of microscopic cracks which distribute the surface’s load across the many tiny cracks that are still too small to let water in.

While concrete roads have an average lifespan of 30 years and bridges a span of 40-45 years, the new concrete should survive maintenance free for more than 120 years.

Because the new concrete would be more expensive than normal concrete, Muzenski and Sobolev say the best use of the material right now would be in targeted areas of roadways and bridges where cracks and damage occur most often, like on bridge approach decks.

With the help of 25 more students, Muzenski and Sobolev have installed a slab of the new concrete in a heavily-used parking structure on the UWM campus. They’ve embedded sensors in the slab that give them real-time data on whether or not the new concrete’s waterproof and flexible claims hold up over time.