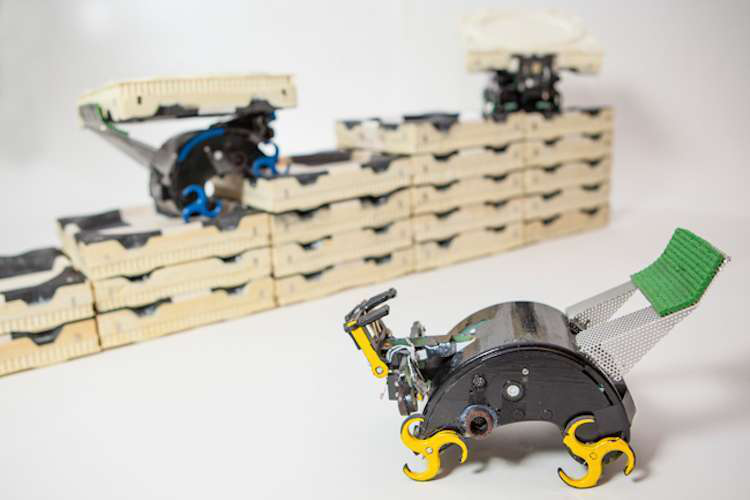 A construction crew without a foreman? Sounds like a terrible idea, but it’s exactly what a group of computer scientists and engineers at Harvard are trying to accomplish.

They’re working on a project known as TERMES, a construction crew of autonomous robots inspired by the building skill of termites. Termites are capable of building extraordinary structures sometimes reaching as high as 12 feet in the air or more.

“The key inspiration we took from termites is the idea that you can do something really complicated as a group, without a supervisor, and secondly that you can do it without everybody discussing explicitly what’s going on, but just by modifying the environment,” Radhika Nagpal, a principal investigator on the project and a computer science professor in Harvard’s School of Engineering and Applied Sciences (SEAS), said in an announcement from the school.

And just like the insects they’re inspired by, the TERMES robot crew is capable of building impressive structures in their own right—towers, castles and staircases, so far—and all without supervision.  And whenever they meet an obstacle, the robots use four simple types of sensors and three actuators to move or navigate around them.

The team of robots doesn’t even communicate with one another. They just build.

“Normally, at the beginning, you have a blueprint and a detailed plan of how to execute it, and the foreman goes out and directs his crew, supervising them as they do it,” Nagpal says. “In insect colonies, it’s not as if the queen is giving them all individual instructions. Each termite doesn’t know what the others are doing or what the current overall state of the mound is.”

How is that possible? Termites use a process known as stigmergy. Rather than communicate with one another, providing updates on what’s completed and what the status of the project at hand is, termites analyze their environment directly and note how it has changed in order to decide what their next course of action is. The team has engineered the TERMES robots to operate the same way.

Incredibly, that means that if one of the termites, or robots, goes down, it doesn’t affect the way the others operate because everyone is simply responding to the changes in the environment rather than each other.

“This also means that the same instructions can be executed by five robots or 500. The TERMES system is an important proof of concept for scalable, distributed artificial intelligence,” according to the Harvard announcement.

Obviously the team’s aim is to lay the foundation for robotic construction crews constructing actual buildings. But in the near future, the team says they could be used to lay sandbags in preparation for flooding or for simple construction tasks on Mars. Don’t miss the videos of the TERMES robots in action below.