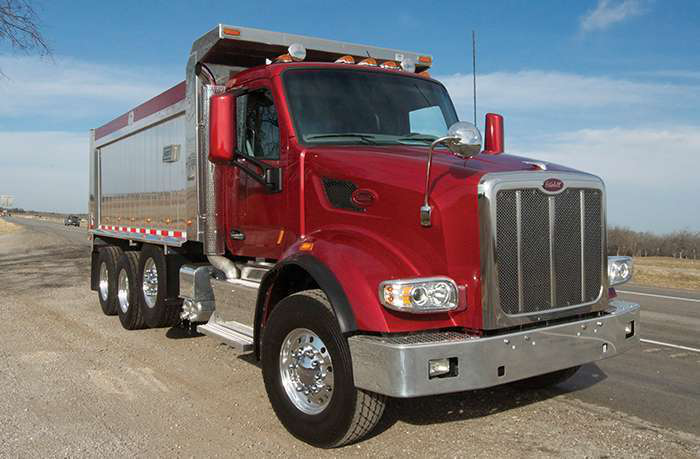 Given the realities of truck design today, Peterbilt’s Model 567 simply did not spring into existence all on its own.

The truck is derived from the company’s Model 579 tractor, which debuted two years ago. The focus of the Model 579 was to create an entirely new and modern cab/driver environment. In order to do this, Peterbilt surveyed hundreds of truck drivers, putting them in cab mock-ups.

The data points created by this research led to the final Model 579 and the eventual Model 567 vocational truck, now entering full production. The end result is a truck that is crafted with driver comfort and productivity as a first priority.

There’s no question the truck is a head-turner.

But its new front end is also highly aerodynamic and features aggressively sloping lines that give the drive excellent views to the front of the truck. In fact, at highway speeds, the hood is largely an afterthought with Peterbilt’s horned ornament the chief reminder that it’s there at all.

Peterbilt vocational brand manager Charlie Cook walked me around the truck prior to my test drive. Most of the enhancements found on the Model 567 are straight-forward enough. But a few he noted are more subtle.

During a cursory inspection of the 450 horsepower MX-13 diesel engine under the hood, Cook pointed out the power steering assembly behind the left front tire. Peterbilt engineers have angled the steering gearbox off the frame by 8 degrees. The result is more even stop-to-stop steering inputs and a more sure-footed vehicle in tight surroundings.

Combined with the excellent views from the diver seat, the dump truck proved to be a breeze to maneuver.

An extra boost is PACCAR’s new, proprietary Evolution air suspension seat. The seat features an infinite range of ergonomic settings. Its most high-profile feature, however, is an automatic raise-lower function, which makes getting in and out of the truck much easier. The seat automatically lowers to let a driver out once the cab door is open, and remains down until you climb back inside. Once a driver is in place, however, the seat smoothly raises up to your preselected driving height. It’s a slick design that drivers will certainly appreciate.

Walking around the truck at idle, I was amazed at how quiet the PACCAR MX-13 is. This is the case regardless of whether you’re outside the truck or up in the cab. Peterbilt engineers have done a wonderful job of isolating the truck’s interior from engine and road noise and dampening powertrain and road surface vibrations.

Although the Model 567 will eventually be “the” primary vocational truck offered by Peterbilt, for now production of the company’s Model 365 and Model 367 will continue for the foreseeable future. Peterbilt is taking Model 567 orders now for both 115- and 121-BBC models of the new truck.