In addition, the three dozers can be equipped with an option for remote-control Cat Command for dozing, plus added mounting features and wire harness routing paths to streamline installation of third-party grade-control systems.

Cat operator assist ease-of-use features are available on D1-D3 dozers. Dealer Command for dozing installation kits are also now available, and machines in the field can be retrofitted with the technology.

"Any next-gen dozer, so anything from August 2020 or later, can be outfitted with the technology on both the operator assist features and Cat Command functionality,” Furr said.

The suite of operator assist technologies on the small dozers is an expansion and improvement of existing technology.

For example, he said, when bundled with the Cat attachment ready option (ARO) with Assist and Grade 3D with Assist packages, the Stable Blade Lift and Tilt improves performance over Stable Blade.

“It automatically allows workers behind the scenes to create smooth surfaces with less effort," Furr said. The feature combines blade and chassis accelerometers with an advanced control algorithm to automatically make minor blade raise, lower and left/right tilt commands to compensate for machine movement, resulting in a smoother surface.

Also, the Blade Load Monitor provides real-time feedback on the current load versus the target machine load to fully utilize machine capacity. Furr said this is beneficial for novice operators as a training tool and experienced operators as a reference to confirm they are maximizing the machine's capabilities. Automatically compensating for ground conditions, this monitors both machine load and track slippage and provides feedback to the operator on the current load compared to maximum pushing capacity.

Lastly, Furr said AutoCarry, in conjunction with the other operator assist functions, automates blade lift and is designed to get more consistent blade loads on each pass and reduce track slip. AutoCarry now automatically engages without the need for Slope Assist or Grade 3D automatics to activate. Furr said operators must opt-in enablement as the default for AutoCarry is off and once enabled remains in standby mode until the blade is fully loaded and then automatically engages.

Cat D1-D3 dozers now come remote ready from the factory; dealers can quickly install the remaining components in the field. The Cat Command components are fully integrated with the machine's electronic and hydraulic systems.

Cat Command removes operators from the cab and gives them the ability to operate the machine using either a line-of-sight, over-the-shoulder remote console, or a non-line-of-sight station.

The over-the-shoulder Command console provides line-of-sight machine control from up to 437 yards (1,312 feet) away. The console provides access to all dozer functions and supports operator assist technologies. Integrated with the machine electronics, users retain the same control as they would operating inside the cab.

The machine shuts down if the remote all-stop switch is pressed, the command stop is activated, wireless communication is lost, or the console is tilted more than 45 degrees.

"From a safety perspective, we have built-in safeguards with these so if you were to even tilt the console 45 degrees, the machine would automatically cut off,” Furr said. “We've got safety built in all the way around, whether it be in the console version or the Cat Command station.”

He noted that Cat was intentional about making sure that functional safety was a big piece of Cat Command.

“I think as we move more and more into automation and things like that, customers will become more likely to use it, if needed, from a safety perspective,” Furr said. “We've been very intentional about our design and have done quite a bit of field following and internal work to make sure safety is number one.”

He said if there are any intermittent problems with electronics, the machine will not operate.

The non-line-of-sight station, where the operator can be in a climate-controlled environment and control the dozer from close by or several miles away using simulated traditional machine controls. A single station allows users to control all types of Cat Command machines including dozers, excavators and wheel loaders one at a time. Furr said the station components include a machine joystick and foot pedal plus a touchscreen mount for machine control. Universal screen mounts are included for dozer camera displays.

Application with the smaller dozers is expected to vary as the transition from utilizing such systems on the medium and large dozers is made.

“Our customer base goes across all spectrums of the sizes of equipment that they need, and just because they're operating D5 and D6 size machines, a lot of them have smaller ones as well," Furr said. For the larger dozers, mining has been the primary application for remote control. However, Furr noted that the D1, D2 and D3 dozers are not typically used in mining; they're more of a finish grading machine.

“As we start to get the orders, we'll probably see some more applications come in,” Furr said, noting that he believes some folks would like to use it as just something neat to have. “We like to make sure that the customers are in a safety situation or that it's truly needed for the jobsite.” 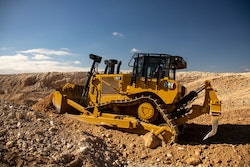 Quick Data: How Have Dozer Sales and Auction Prices Fared Since 2020? 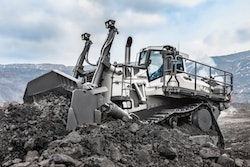 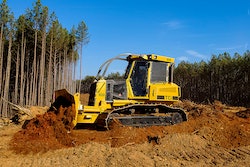