Ryan Whisner
Nov 7, 2022
According to Wacker Neuson, the ET58 is well-balanced for heavy lifting.
Wacker Neuron

The flagship model of Wacker Neuson’s latest compact excavator models was on display at Equip Expo 2022 in Louisville, Kentucky.

The 5.8-ton ET58, a conventional tracked excavator, is part of a family of excavators, the 4.2-ton ET42 and the minimal tail swing 5-ton EZ50, that have been released over the past couple of years.

“It's an interesting class of machines,” said John Dotto, Wacker Neuson product application and training specialist. "The 4-ton excavator was the catalyst for designing this particular family of machines, because when EPA regulations said that 3.5-ton excavators over 25 horsepower required an aftertreatment system, it became pretty cost ineffective to have that size class machine with the high horsepower.”

For customers looking for a machine with a small footprint but high productivity, Wacker Neuson came forward with the ET42.

"That's where we've got the 48-horsepower Perkins engine on the ET42, EZ50 and ET58," Dotto said, noting that the E4T2 filled the gap, bringing Wacker Neuson back into the high-horsepower game in a compact package.

With a cab a bit bigger than a 3.5-ton machine and maintaining a small footprint, contractors can haul a 4.2-ton excavator and CTL. Dotto noted that many are opting for that option versus the one-piece tractor/backhoe solution.

“A lot of guys are looking at a mini excavator plus a CTL to stay productive and have two machines working on site and doing work,” he said.

Dotto noted that the three mini excavators have diverse uses.

"A lot of landscapers are used to running 3.5- to 4-ton excavators," he said. "If you get into things like small boulder walls or things that are going to require a little bit more carrying capacity, a 6-ton size class maybe a 5-ton zero tail is appropriate for the landscaper who's carrying maybe outcroppings or boulders that are a little bit larger."

Dotto cited the ET58 as being well-balanced and powerful for heavy lifting.

"It's a great machine overall," Dotto said. "In this family, it's the heaviest machine. It's got a different arm system and undercarriage than the ET42 and EZ50, so it's a little bit heavier, and it's got the most technology."

Among the unique features of the ET58 is the larger 7-inch display with a backup camera.

“I would call the ET58 kind of our flagship mini excavator because it's got the most technology,” he said. "With the off-set cab, the four-way angled blade with float, this is a great example of top-tier performance in that 5.8- to 6-ton size excavator.”

“From where that operator is sitting it's really important that he's got visibility to his right front track because that is kind of what lets the excavator operator know where he's at in space,” Dotto said. "Our design team in Linz, Austria, worked closely with the North American team to understand that visibility for North America was a top priority,."

As a result, Wacker Neuson engineers revised the low-profile hood design on the trio of excavators and expanded the side window glass down to the lower portion of the cab, allowing the operator to see the front of both tracks. This, combined with the large windows and the offset boom, provides a complete view of the boom and attachment, as well as the working area.

In addition to improved visibility, Wacker Neuson considered operator comfort and convenience from top to bottom when designing the excavators.

“The understanding is that a comfortable operator is a productive operator,” Dotto said. Cab models feature standard air-conditioning, a four-position windshield design that allows for fresh air and easier communication, a cellphone charger and holder, an air-cushioned seat and an adjustable armrest.

Joystick and jog dial are conveniently located, including an electronic ISO/SAE changeover switch. According to Dotto, even the floor is ergonomically designed so the operator’s feet rest at a comfortable angle. Additionally, the 3.5-inch color display (7-inch in the ET58) provides information in an easy-to-read display.

All three excavators have an active machine warning signal, a red LED strip on the back that lets others on the jobsite know it is running. Dotto said the lights are tied to the lefthand control levers.

“As soon as you put the lefthand control into the active position, you’ve got an active machine and that light comes on,” he said.

The excavators offer the same three-point bucket linkage that can be found on the company’s larger models.

“This unique kinematic linkage system offers a 200-degree angle of rotation that combines excellent breakout force with a greater range of motion,” Dotto said, noting that the linkage also provides greater vertical digging depth, which can be especially helpful when excavating next to walls. It can also rotate the bucket further to keep the load more secure in it before dumping.

Also, the E42, EZ50 and ET58 each come standard with a hydraulic quick-connect system that allows an attachment to be changed in seconds from the cab. A diverter valve on the auxiliary hydraulic line allows operators to switch between the thumb and another attachment, such as a hydraulic breaker, without disconnecting the hoses.

An optional hydraulic thumb offers, besides a conventional bucket application, a grip function that expands the spectrum of applications for the machines.

Each machine also includes Wacker Neuson’s “Load Sensing Flow Sharing” system in which the excavator adjusts automatically to the load, while the joystick movements remain constant for the operator. 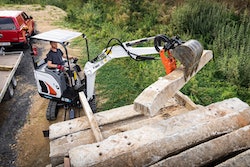 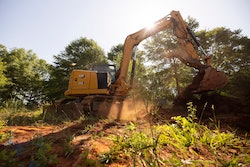 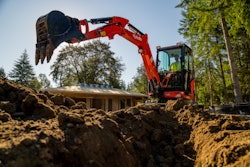