Doosan construction equipment has a new brand name. From now on, it will be called Develon.

The new name – which will eventually be on all of its new equipment and its dealerships – was revealed January 17 at a press event in Las Vegas.

The name change will be a global one, not just for North America, and is effective immediately.

“Anything you know today within our company that is Doosan will change to Develon,” said Todd Roecker, vice president of growth initiatives at Doosan Infracore North America.

Though the name will change, Develon machines will keep the distinctive orange color.

The rebranding has been under development following Doosan Infracore’s acquisition by Hyundai Heavy Industries in August 2021.

Doosan Heavy Industries & Construction ran into financial trouble and decided to sell its construction equipment segment to pay off debt. Doosan Infracore had until 2024 to continue to use the Doosan name, but company officials decided to move forward with a rebrand sooner.

Both Doosan Infracore North America and Hyundai Construction Equipment have been operating separately as subsidiaries under the Hyundai Genuine holding company, which was created after the Doosan purchase. The acquisition included the Doosan orange construction line and the Doosan Engine group, but not Doosan Portable Power or Bobcat.

Officials at the new naming event stressed that both companies will continue to operate independently and compete against one another. Their goal remains for Hyundai Genuine to rise to a top-five global construction equipment company by 2025.

The Develon name doesn’t quite roll off the tongue and will likely take some getting used to, something company executives acknowledged.

The word’s pronunciation is patterned after “developing onward.”

“Just like you would say the word ‘develop’ with an ‘n’,” Roecker said.

In a news release, the company said the name is designed to “convey the company’s drive to develop onward to bring innovative solutions to the construction equipment industry through technological transformation and the development of exceptional equipment and services.”

The new name extends to everything currently on Doosan machines, including parts and engines. Dealerships will also follow the rebrand, with new signs and décor.

Doosan executives said the new decals would be similar to the Doosan ones on the equipment, in the same positions on the machines but with the new name. The “D” in Develon is designed to be shaped as a bucket on the logo and somewhat of a forward arrow.

All construction equipment model nomenclature will remain the same. The company will also keep its North American headquarters in Suwanee, Georgia.

The Develon name will be phased in during 2023. Dealers were being notified this week of the name change. The name will also roll out globally, with North America as the first market to get the announcement.

The Develon brand will get a big launch at ConExpo in March, where the company has planned to emblazon the moniker throughout its prominent, large booth in the Festival Grounds lot (booth F9153) at the Las Vegas Convention Center.

“After ConExpo, continued efforts will be made to advance the brand at the local dealer level through updates to signage and machine decals,” the company says. “Customers are likely to begin to see newly branded machines at their local Develon dealerships and on jobsites as early as the end of Q2 2023.”

The goal is to have all its dealerships and new equipment rebranded by the end of the year. The company has about 180 dealers in the U.S. and Canada.

So far, the new name extends only to the Doosan “brand,” but eventually the company will also change its name. Company executives said that name is still being discussed.

Dealers have known for months that a name change was coming. Roecker said the sense among dealers was the name should be changed sooner, rather than wait until 2024.

In announcing the new name, Roecker discussed Doosan’s history in North America. The first Daewoo orange excavator came to North America in 1991. Doosan bought Daewoo in 2005 and changed the brand to Doosan.

“So the transition of these brands isn't something that's really new to us,” Roecker said. “… Each time that we've done these transitions, we have evolved as a business. We have evolved in our product offerings.” 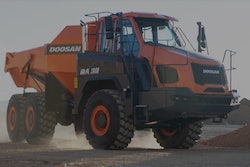 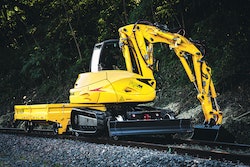 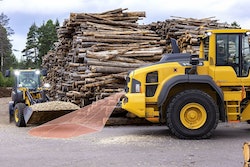