The advice comes particularly timely as we head into the holday seasons, when criminals have longer opportunities for sneaking onto jobsites and taking off with equipment.

“Holiday weekends are the worst,” Campbell told an audience at the recent Shift Conference of the Association of Equipment Management Professionals. “Because Friday night into Saturday morning, they're grabbing your equipment, and you're not realizing it's gone until Tuesday. That piece of equipment is gone.”

Response time is crucial in recovering stolen equipment. The sooner it can be reported and added into the National Crime Information Center database, the better chance it will be found. But quick action is paramount. According to the National Insurance Crime Bureau, only 20% of stolen equipment and tools are recovered, and losses amount to more than $1 billion a year.

One problem occurs when police show up on the jobsite after a theft and hit delays in getting the information they need.

“When I go to a scene of a piece of equipment stolen, the first thing I ask for is documentation that you own it, proof of ownership and what the serial number is, what the product number is, what attachments it has on it,” Campbell says. “Ninety-eight percent of the time, somebody has to call the office. During that time, we're twiddling our thumbs because we can’t enter it in the computer as stolen. Not having this information right off offhand is hurting everyone.”

Campbell notes that the manufacturers’ metal ID plates are easily snapped off the machines or scratched out. So owners should come up with their own ID plates they can weld on or somehow permanently attach to the machine in a place where only they know to look and thieves won’t find it.

He also recommends that owners keep a file on each piece of equipment so they can immediately email it to a police officer if it’s stolen.

The information should include the equipment’s serial numbers, any other distinct markings or identifications on it, the bill of sale or other information to prove ownership.

The form should also have an emergency contact, and it should be someone who will respond quickly.

“I can't tell you how many times we've reported a piece of equipment stolen, and we've recovered it,” he says. “Now we can't get in contact with the person that reported it stolen.”

He recommends storing the form in the cloud so it can be emailed to police immediately after something is stolen, without having to search around.

“When you're on scene, you can … email it to the cop and now he has everything. Now it goes into system properly.”

One of the big contributors to equipment theft is a lack of jobsite security.

Often Campbell finds equipment parked all over a jobsite, and the site has several entry and exit points.

“I always ask contractors that get their stuff stolen, why don't you park in one particular place,” he says. The responses are typically, “That's where we stopped the job for the day, or that's where it's better for us to start the day for tomorrow.”

He recommends having only one entry and exit point for all your equipment. Erecting barriers, such as walls, fences and berms, is also effective.

Simple devices can also have a big effect.

Proximity alarms that flash or sound off or both when someone walks past them are a deterrent. “It's the littlest thing, but it spooks these guys to where they don't want to bring attention to themselves,” he says.

Even a sign that says surveillance cameras are on the property serves as a deterrent.

“As silly as these signs may look, they work,” he says.

“If a bad guy shows up and your piece of equipment is locked up pretty good with some sort of immobilizer, they're going to just move on. They're not going to waste their time trying to cut that off.”

Cameras are good, but make sure to replace the batteries on trail cameras before they die.

Tracking devices are also good, but someone has to be ready to answer the call when it comes. He recommends putting a geofence around the equipment so the owner is notified as soon as it leaves that designated area. “But you have to stay mindful of the 24-hour, seven-day-a-week notification,” he adds. “If that geofence goes off in the middle of the night and you are not paying attention or you're sleeping, you're going to lose that piece of equipment.”

How to work with police

Start by introducing yourself. Provide them with jobsite information, such as the hours and days its active. Also let the police know how much the equipment on the site is worth. “It's a loss for them as well in a sense of they have to explain to the county commissioner to the city commissioners why this guy lost $300,000,” he explains.

It’s also important to give them an emergency contact for when something gets stolen or to check on someone being on site without authorization.

He also recommends requesting extra patrols, and if there is a theft, stay involved in the investigation and regularly ask investigators questions. 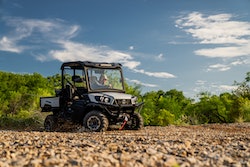 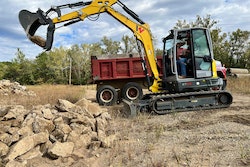 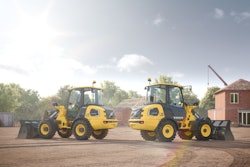