What's It Like To Operate the New Volvo Electric ECR25 Excavator, L25 Loader?

Four Volvo CE customers used the two machines in a variety of applications for about a year.

The verdict? Zero-emissions does not mean decreases in productivity. Testers say they saw no compromises in digging depth and breakout force on the excavator or tipping load and dump height on the wheel loader. In addition, the units had full use of hydraulic power to any attachments.

To help show its operators what the electric ECR25 could do, one company testing the machines, demolition contractor Casper Company, ran a side-by-side demo of the electric unit with a diesel machine, both equipped with breakers. “It was as strong if not stronger [than the diesel machine] and that kind of changed everyone’s mind,” says Darrell Merritt, Casper superintendent. “I was shocked as well.”

“I had guys who wanted all the diesel power they could get, and they were surprised at the machines," says Jacques Marais, director, Baltic Sands, a residential builder that specializes in off-grid property management, which also demo’d the electric units.

Where the challenges remain are in battery charging speed and infrastructure. “There are current limitations in terms of getting a full eight-hour day,” Marais comments. Still, he says, “recognize that the electric machine is going to give you something that’s really close to it.”

“My guys usually work 10-hour days, and we had to charge them at lunch and on breaks,” Merritt says. “If we were doing soft digging we got a little further, but not if we were using a hammer for 10 hours a day.”

But there's no doubt that there is a growing interest in electric-powered units by users, prompted in part by project owner concerns over the emissions and noise produced by diesel machines.

A week after the California press event, Volvo CE demo'ed the two machines at the Utility Expo. More than tire-kickers got behind the controls: Volvo says it took ECR25 orders during the show, orders that will start being filled in January.

Funded by the U.S. Environmental Protection Agency and administered by the South Coast Air Quality Management District, the goal of the pilot test was two-fold, says Ray Gallant, vice president of product management and productivity, Volvo CE. One, put the machines in real working conditions, and two, test the charging infrastructure.

Together the operations put 400 hours on the machines — but don’t equate that with hours on a diesel engine, which accumulates hours as it consumes fuel, including idle time. With electric machines, if it’s not moving, no hours accumulate.

Testing operations found that charging infrastructure and speed remain a challenge, although Volvo says the high current available on the U.S. power grid proved beneficial in comparison with the European tests it has conducted. The tests used several charging options, including 240-volt AC grid power, a prototype 48-volt fast-charging mobile charger and a solar-powered charger manufactured by Beam Global.

The machines use the same Type 2 charger currently on electric cars.

Since Casper was using its electric machines on several jobs, it transported the units back to its yard for overnight charges.

Because Baltic Sands works in remote areas that aren’t connected to the grid, during the early stages of the project, it transported the machines back to its yard for charging. Baltic eventually landed on using the solar-powered charger. “We found that to be a really good solution," Marais says. "It was an exciting prospect for us, especially down the line.”

While his older operators were hesitant at first, that quickly dissipated, Merritt says. “They figured out it wasn’t so hard.”  There were also other benefits.

“We do a lot of underground utilities in existing occupied buildings, and some of the biggest problems we have are noise and exhaust fumes,” Merritt says. Because of this, his firm was prompted to do this work by hand. Merritt was actively looking for an alternative when the Volvo test opportunity presented itself.

“My guys loved it because they could talk to each other," he says. (Volvo says exterior noise decreased by 9 decibels — a 90% reduction in sound power — on the the ECR25 compared to diesel units. The L25 saw similar reduction in sound power.) "They’re usually waving their arms to get an operator’s attention, so it’s also a safety thing.”

Another benefit, Merritt says: not being tired at the end of the day.

Electric machines could also serve as a competitive advantage, Merritt says. “A lot of time we kind of get a bad rap for being the loud demolition guys. This gives us up a leg up, and our general contractors are pretty excited about it.”

Volvo also points out that electric machines don't require diesel engine maintenance, such as changing oil, oil filters and diesel particulate filters. The DEF tank is also eliminated. What remains is the hydraulic system's oil and filter and the coolant for the inverters and the drivetrain.

Volvo says the lithium-ion battery-powered units — which again worked a combined 400 hours — reduced carbon-dioxide emissions by 6 metric tons. Compared with a diesel-powered model, the test units saved 560 gallons of fuel at an estimated cost of $2,400, according to Volvo.

Priced at $92,900, the ECR25 features a 24-hour electric motor (peak), 20-kilowatt-hour battery capacity and has an operating weight of 6,102 pounds. In the operator's seat, machine noise is 74 decibels; outside the machine, it's 84 decibels.

Volvo says it will continue to develop the electrification of other sizes and types of machines, along with pursuing additional grant opportunities and strategic partnerships. Beyond electric, Volvo sees hydrogen fuel cells, hydrogen combustion and grid-connected machines all playing a part in the zero-emission jobsite journey.

Volvo says its R&D will focus next on continuing to enhance the run times of the machines, optimizing on-board charging systems and exploring alternative charging methods for jobsites that do not have ready access to charging stations. 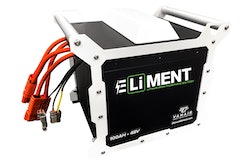 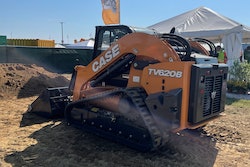 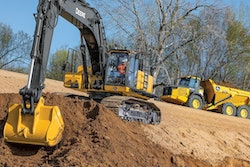