When’s it time to knock down a wall, crush through some concrete or slice through rebar, these 10 attachments for construction equipment can help get the job done. 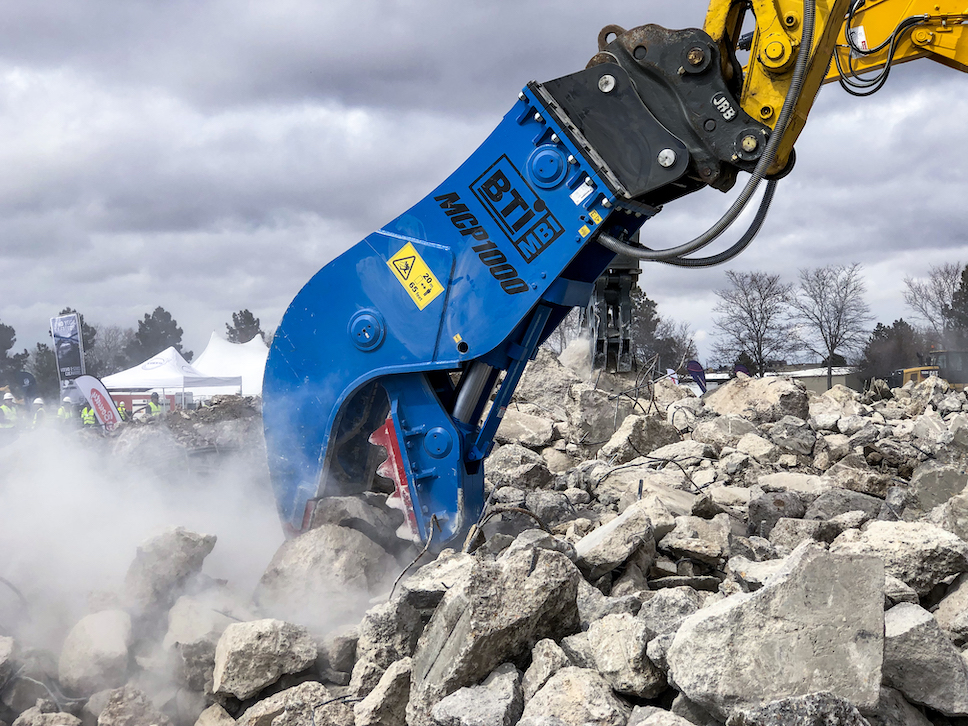 The MCP1000 fixed-head hydraulic pulverizer from BTI Breaker Technology is designed for secondary demolition. Its strategically placed teeth enable fast fragmentation and separation of rebar from concrete. The teeth are also designed for easy replacement. The pulverizer’s speed valve alternates between power and speed, depending on the load, for faster cycle times. The openings of the fixed body make unloading of demolished material easier while maintaining the attachment’s performance and productivity.

Isolating blows from the carrier 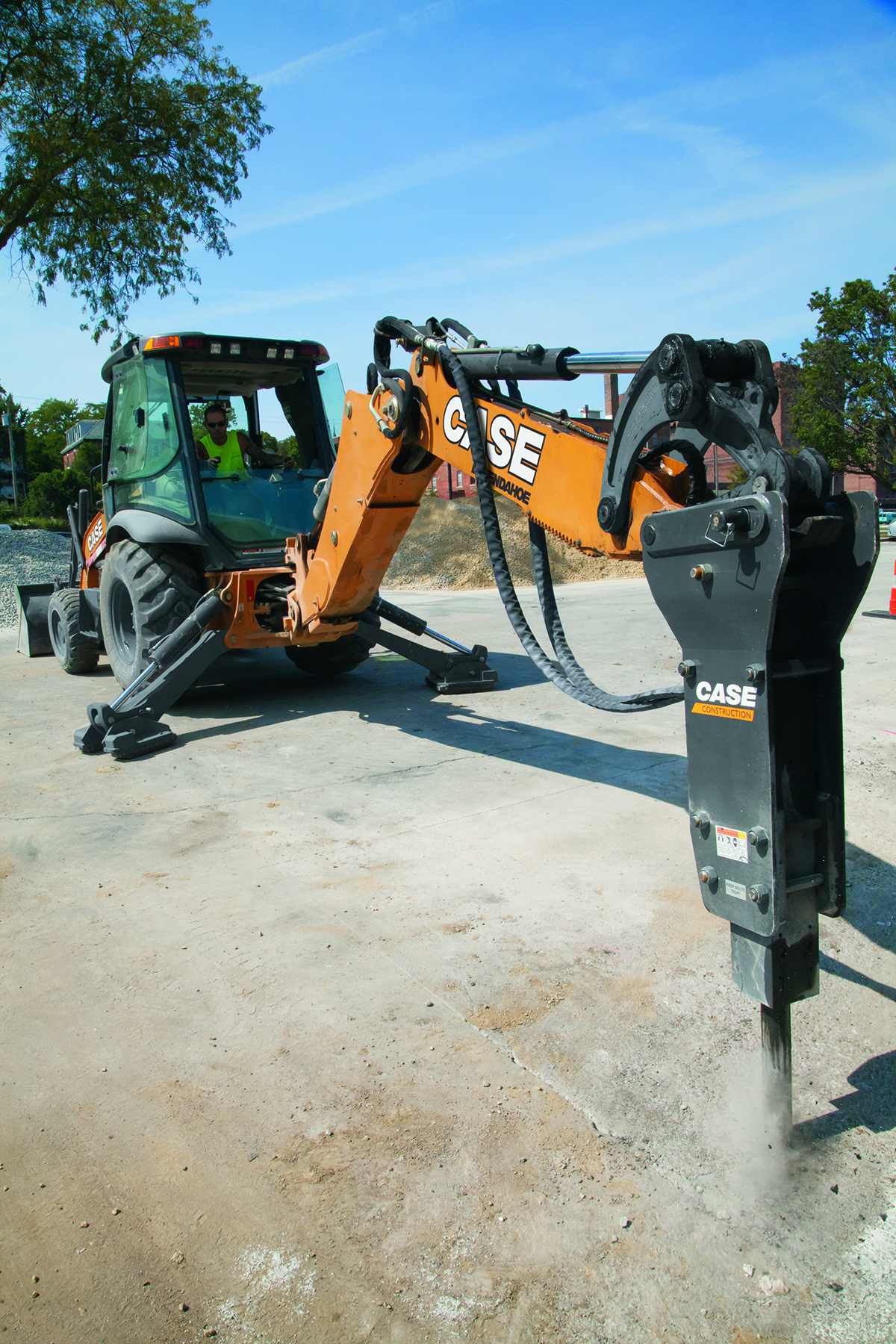 Case’s hydraulic hammers come with easy-to-install kits with fully configured and preassembled hoses, as well as service tools, for attachment to the company’s backhoes, excavators, compact track loaders and skid steers. The hammers have just two moving parts. The cushion chamber isolates every blow from the carrier machine and recycles the energy for the next blow. The long-stroke piston efficiently transfers energy and reduces recoil. The hammers come with a gas recharge kit. Case offers a three-year warranty on the hammers. 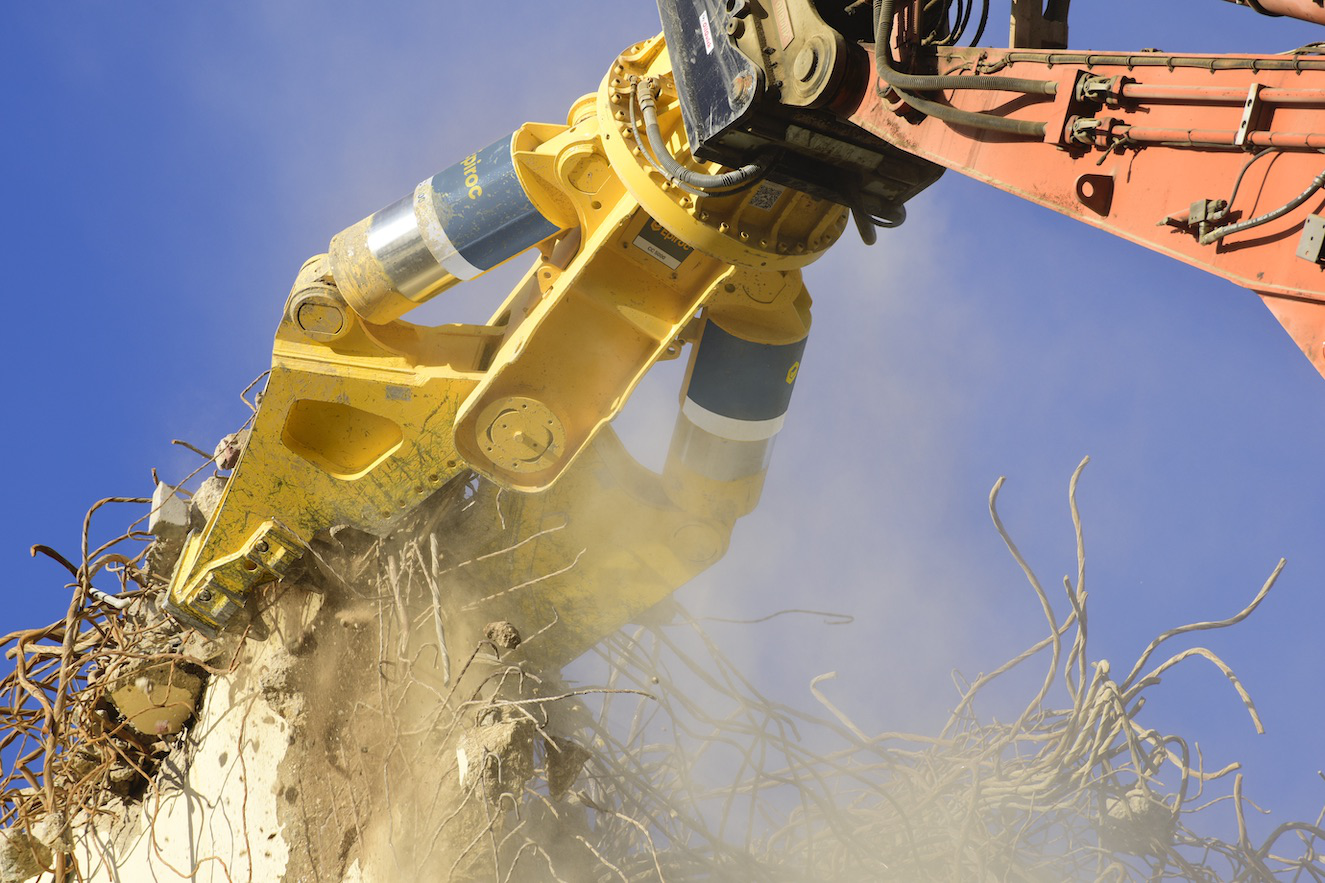 Epiroc’s multipurpose Combi Cutter hydraulic attachments are designed for primary demolition, as well as secondary reduction of concrete structures and cutting steel structures at demolition sites. Two hydraulic cylinders deliver constant closing forces to the material, and open-close cycle times are as fast as 1.6 seconds. The cutters feature 360-degree rotation and jaws that can be switched to accommodate varied tasks. The CC 2300 and CC 7000 models are available in universal and steel-cutting versions, and the CC 3100 has an optional pulverizer jaw. 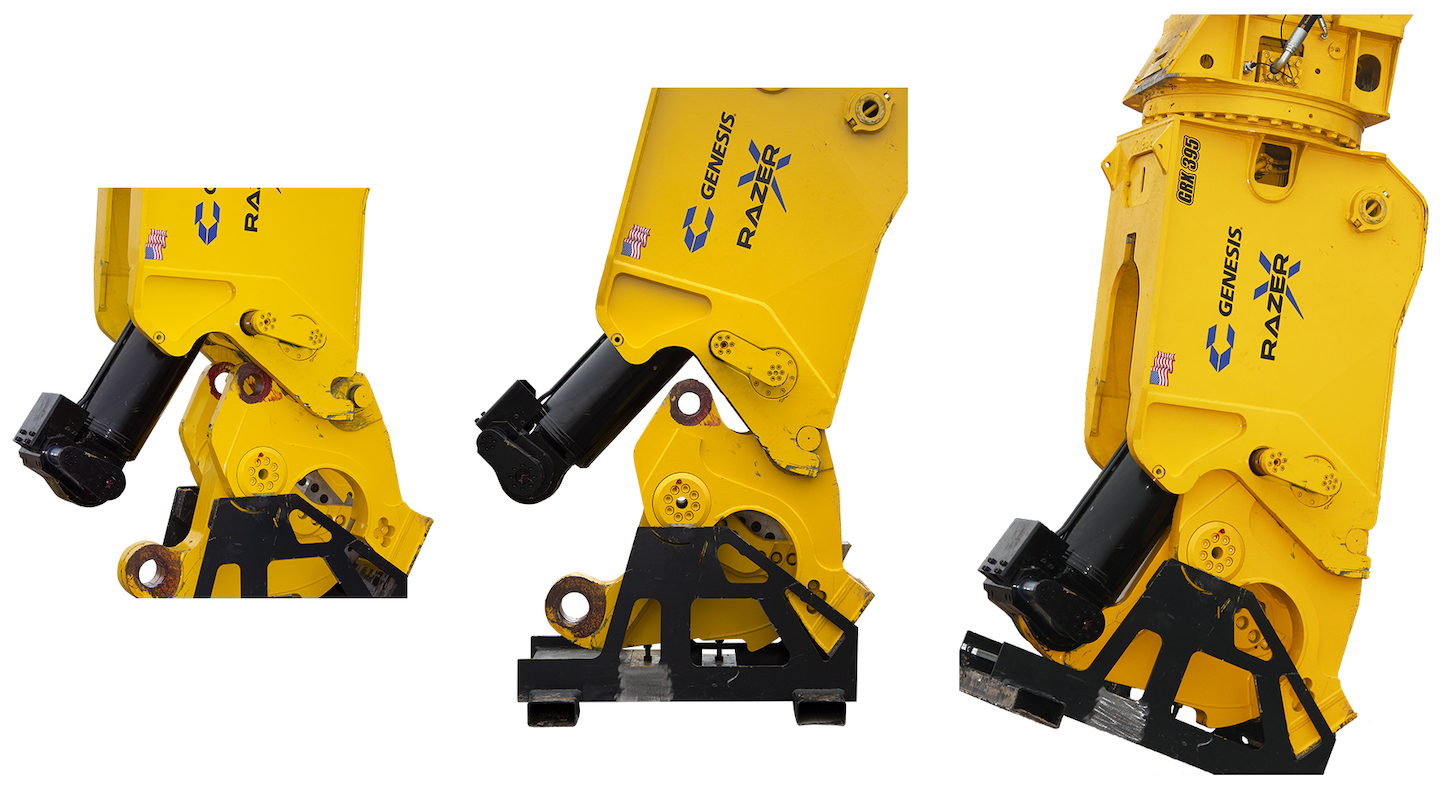 The Razer X Multi-Jaw Demolition Tool (GRX) from Genesis Attachments enables excavator operators to change jaw sets in less than 2 minutes without leaving the cab. They can do this by controlling hydraulically actuated pins that connect to the cylinder and jaw set. The Razer X is available with cracker and shear jaws to process a variety of materials, and each GRX jaw set comes with its own stand that is designed for correct positioning and efficient handling. The demo tool also has bolt-on and reversible wear parts for simpler maintenance. 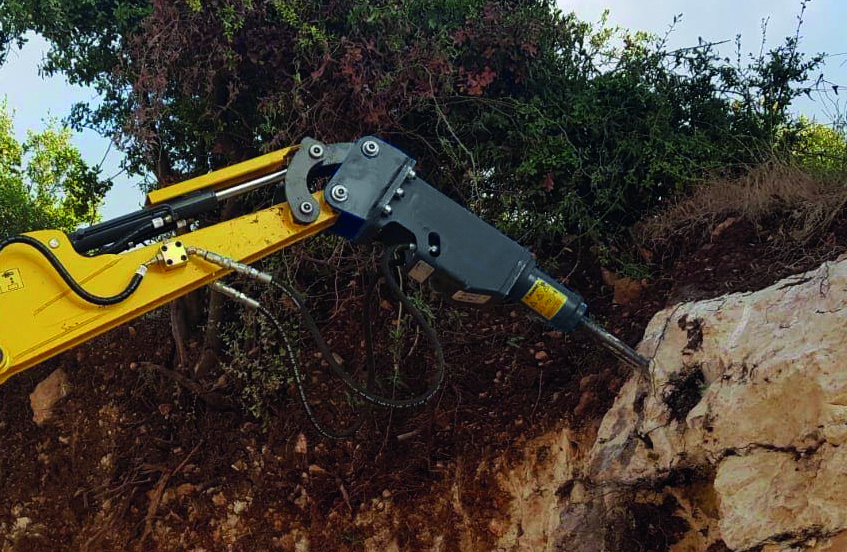 Kinshofer’s KSB-Series hydraulic breakers feature a monobloc design to resist linkage strain during operation. The design also reduces maintenance and increases productivity for construction, demolition and recycling jobs. The KSB-Series is composed of eight models for excavators from .5 to 12 tons. The breakers are equipped with a nitrogen inertial energy recovery system to increase strike power and reduce stress on the excavator arm. Kinshofer says it boosted nitrogen charge life by 300 percent. 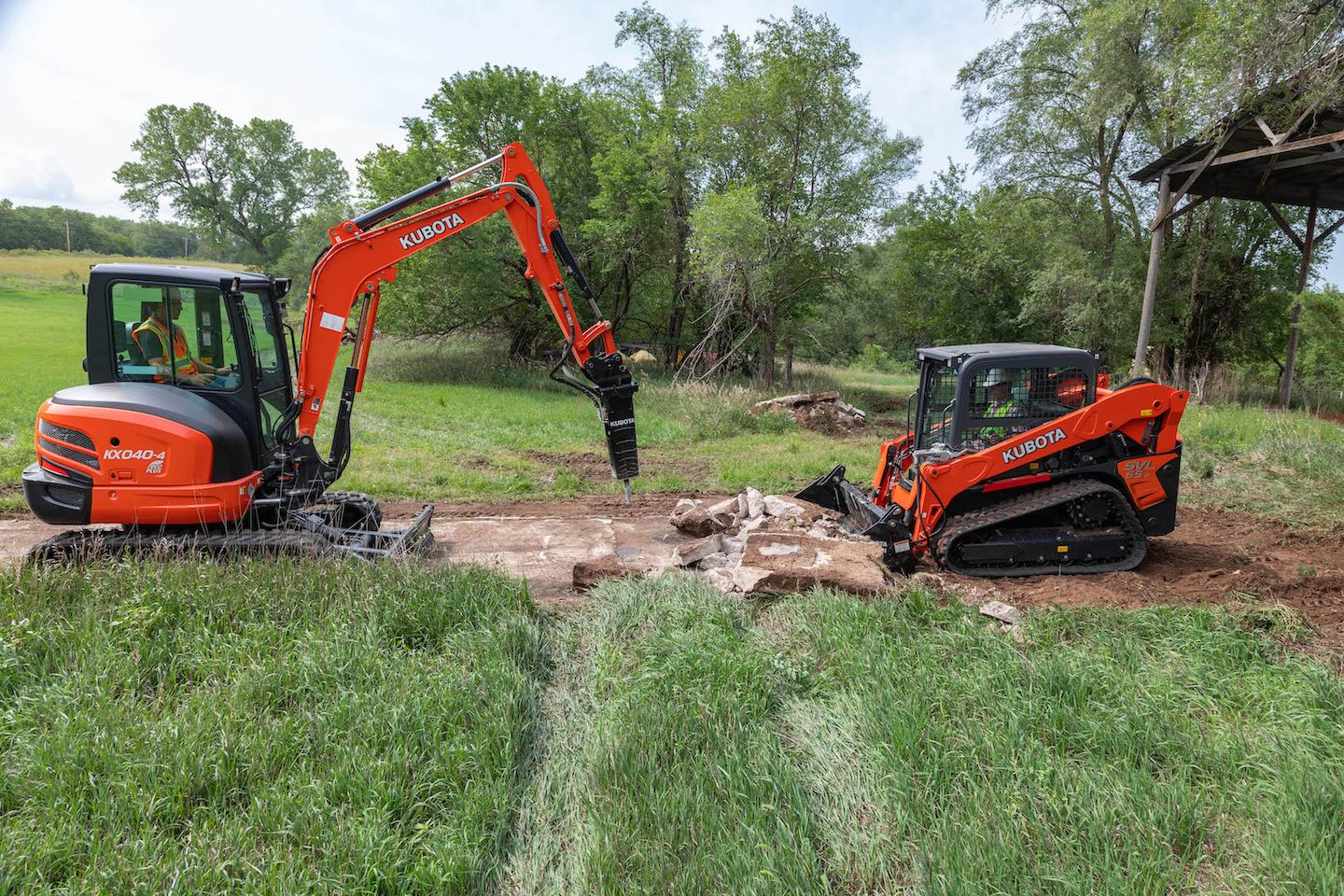 The BR Series Breakers from Kubota by Land Pride are designed for demolition and frozen ground and can be used with compact excavators, compact track loaders and skid steers. The series includes six models – BR310, BR360, BR460, BR510, BR560 and BR860. They can perform such tasks as removing curbs, foundations and concrete walls. They are designed for reduced noise. They come with a moil point and a chisel point that can be changed out quickly. 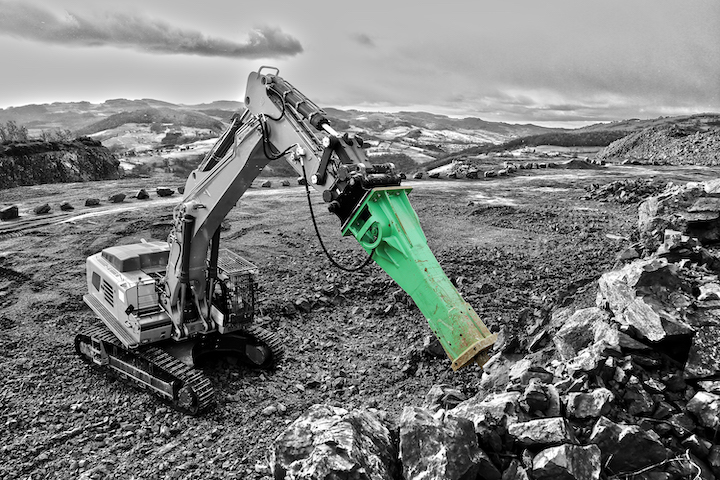 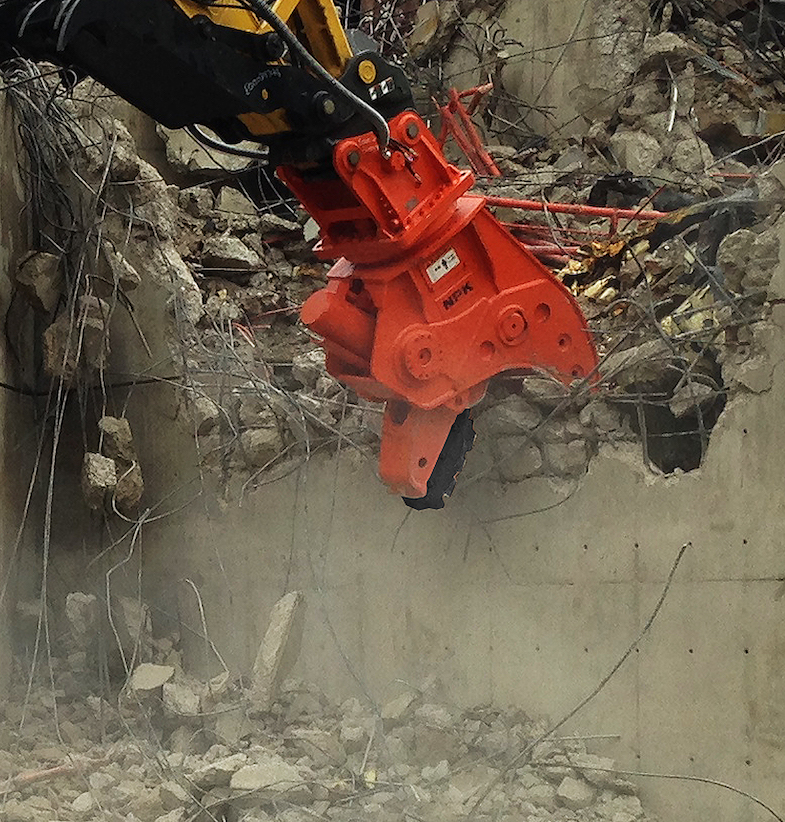 NPK Concrete Crushers for excavators in the 21- to 50-ton range are designed to crush through reinforced concrete for faster, more efficient separation of concrete and steel rebar on primary and secondary demolition and recycling operations. The crushers feature abrasion-resistant, high-strength, alloy steel teeth and a bolt-on replaceable tooth plate on the movable jaw. Power rotation of 360 degrees is optional. NPK’s hydraulic intensifier system provides faster cycle times when compared to crushers with larger cylinders, the company says. 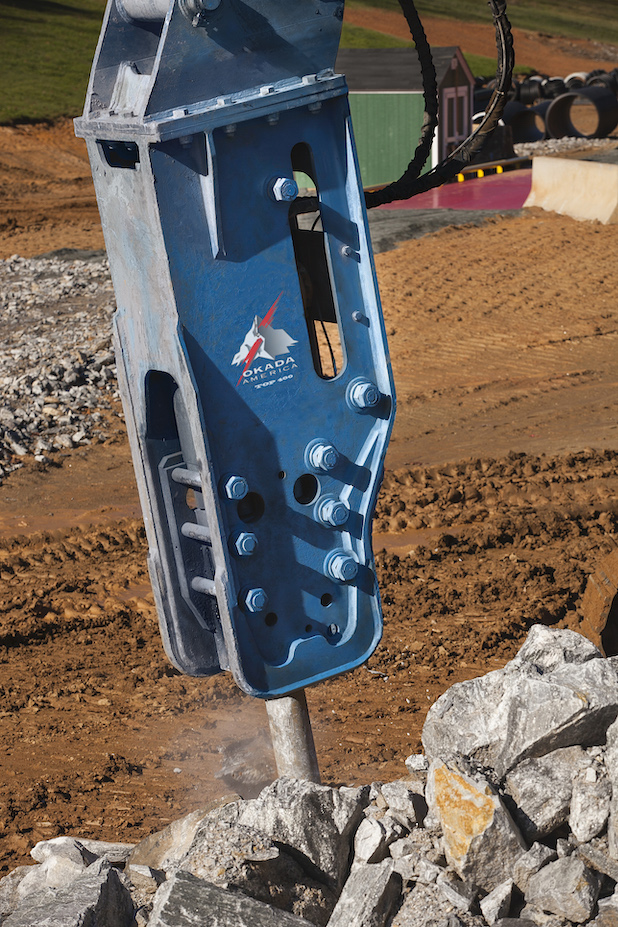 The 15 models in Okada America’s TOP Series hydraulic breakers range in energy classes of 150 to 15,000 foot-pounds. They fit skid-steers, compact excavators, track loaders, backhoes and excavators. They feature a large-capacity accumulator to protect the carrier’s hydraulic system from pressure strikes, and nitrogen gas cushions the pistons on the upstroke and increases the downstroke force. A central grease port allows the breaker to adapt to most auto-lube systems. And the piston’s long stroke design reduces shock loads and vibration. 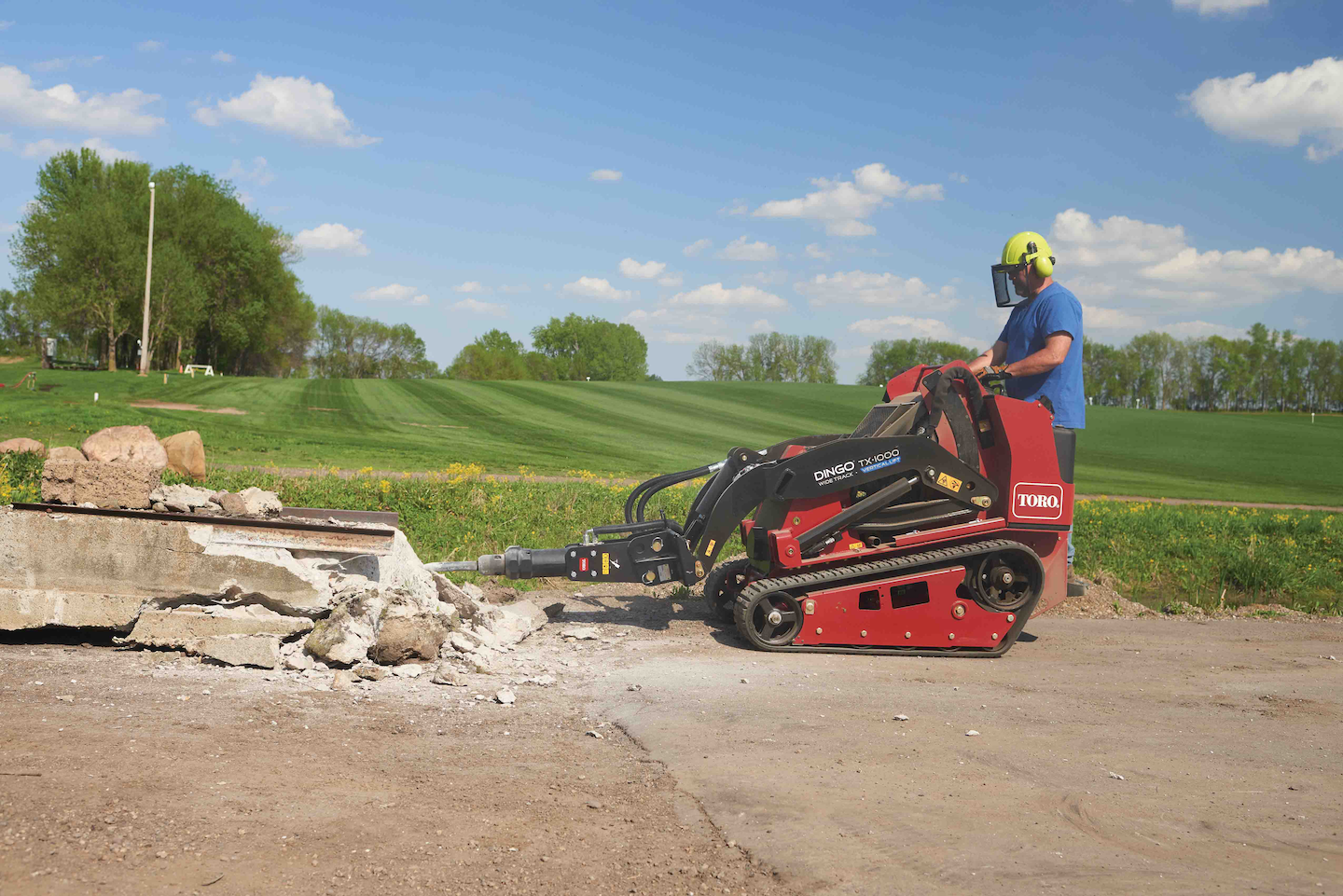 The Toro Dingo hydraulic breaker delivers 180 foot-pounds of force and up to 1,250 blows per minute to handle a variety of applications, including breaking concrete, asphalt, rock or brick during demolition, renovation or replacement jobs. It can also be configured horizontally for breaking walls. The breaker comes in handy when demolishing footings, sidewalks, foundations and other structures. The standard conical tool bit breaks down to a 10-inch depth. Other bits are available, such as line, moil point, chisel and an 8-inch tamper.