So what’s new in heavy trucks? Everything.

Now the federal government has its sights on regulating greenhouse gases and improving fuel economy. This has led truck OEMs to re-examine their designs in order to meet these standards, while also meeting customer demands.

Advances in drivetrain technology are yielding higher power density (power output for a given size of engine), allowing the use of smaller-displacement, lighter-weight engines for improved fuel efficiency with no loss of performance. Other changes further improve fuel economy; the net improvement is typically in high single-digit percentages, but may be more.

Here’s a summary by drivetrain component:

The bowl-shaped depression on the top of a piston is there to improve combustion efficiency, thereby improving fuel efficiency and reducing PM. Manufacturers have been working on bowl shapes for years and have found gains once again. So-called “wave” pistons have protrusions into the bowl from the sides to increase compression and further enhance fuel/air mixing for more complete combustion.

Common rail injection allows higher pressures, which improve fuel atomization and distribution and therefore combustion efficiency. Typical pressures for common rail are 25,000 to 35,000 pounds per square inch, or about twice that of most unit injectors. Some common rail systems deliver up to 50,000 psi. (Fuel pressure is often expressed in bars; 1 bar equals about 14.5 psi.) Compared to unit injectors, those in common rail systems may have more or fewer holes and may have more or fewer individual pulses of fuel per injection sequence.

Likewise, years of improvements to variable rate turbochargers have created turbos that deliver smooth performance at a wide range of engine speeds, with minimal turbo lag during acceleration. But turbos have been limited to one strategy: to increase air volume over what’s available in a naturally-aspirated engine. Turbo compounding adds a second benefit by mechanically coupling the turbo to the crankshaft (or to a generator) while still delivering higher air volumes. The result is a slight bump in power output with no additional fuel usage.

Automated manuals are becoming the most popular option for heavy trucks. They mate well with modern engines, reduce driver fatigue and are more accommodating of less-experienced drivers. AMTs also do a better job of keeping an engine in its sweet spot for given conditions, whether maximum torque or peak fuel efficiency.

OEMs are making improvements to AMTs for construction and vocational applications. Components are ruggedized and ratios optimized; many now include one or two low-reduction ratios to boost performance in tough conditions and allow for low-speed operation, such as curb pouring. These “crawler” gears also allow the use of higher-ratio differentials, perhaps a 3.08 or 3.21 instead of a 3.73 or 3.90, to reduce fuel consumption with no loss of performance at launch, at low-speeds, or on grades.

In the early days of electronic control modules, the engine was the arbiter of performance. Now, it’s the transmission calling the shots. Overall there’s better integration of drivetrain components, and OEMs are making it easier for engines, transmissions and even cruise control systems to chat among themselves. All of this is transparent to the driver other than obvious improvements in performance and fuel efficiency.

Communication between drivetrain components is all done electronically, and the architecture for these data pathways continues to improve in capacity and reliability. But the biggest change in electronics is the number and type of sensors involved. Sensors detect throttle and braking inputs, among other things, while video and radar units monitor conditions external to the truck. These systems provide such safety features as lane departure warning and lane object alerts, and can initiate appropriate actions, such as emergency braking, when necessary.
Adaptive cruise control is used to maintain a following distance behind the vehicle in front of the truck, and places a cap on road speed. Both the following distance and the maximum speed can be set by the driver. Current adaptive cruise control can use data from global navigation satellites to anticipate changes in grade, curves and other road features, in addition to the benefits offered by older designs.

For line haul operations, improvements to aerodynamics offer appreciable gains in fuel efficiency. For vocational trucks and for semi tractors ulling flatbed trailers laden with construction equipment, the gains are negligible. Even so, truck manufacturers, body builders and upfitters continue to seek ways to make construction trucks move more easily through the air. These design changes have low or no impact on initial investment or ongoing costs of owning and operating, so any gains in fuel efficiency, however small, are net positive. 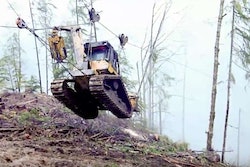 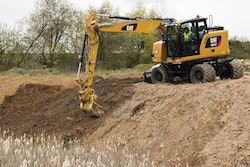 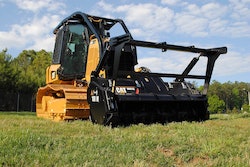