At some point, compact track loaders (CTLs) will quit taking market share from skid steer loaders. But for now, the relentless march of CTLs continues, driven by the narrowing of the cost differential between the two machine types, CTLs’ enhanced suitability to common applications, and the expansion of models in a variety of sizes.

Let’s resolve this first: there are applications where skid steer loaders (SSLs) will remain dominant, such as jobs with speed requirements. Working on hard surfaces, including asphalt and concrete, is tough on both tires or tracks, but replacing tires costs less than replacing tracks. In this area, skid steers win the cost debate. Demolition sites and others with abundant debris are best left to skid steers, especially those with solid tire modifications. For almost everything else, CTLs continue to gain market share from SSLs.

Combined annual sales of SSLs and CTLs remains around 65,000 to 70,000 units, but the mix is changing. For example, Compact Excavator Sales, the U.S. distributor of IHI machines, has offered small loaders for four years. According to Kendall Aldridge, Compact president, the split of the company’s SSL to CTL sales volume by units has moved from 70/30 to 40/60 in that time period. Other OEMs report similar shifts.

There’s a $10,000-to-$20,000 price jump when moving from a skid steer to a compact track loader of comparable power and performance. Although the higher front-end hit has stifled migration to CTLs in the past, customers are weighing other factors into their purchasing decisions and the movement from skid steers to compact track loaders has accelerated.

Brent Coffey of Wacker Neuson points out that this difference is prorated over the ownership period. “If a customer plans on keeping the CTL for four or five years, that’s only $2,000 to $5,000 additional profit per year to hit break-even, which is well within the increased production a CTL can provide.” Higher residual values reduce that required additional profit even further.

Compact track loaders can work in soft underfoot conditions that would stop a skid steer cold. There is no magic number of missed days that creates a break-even for the CTL, says Jorge DeHoyos, senior product manager at Kubota. “You can’t simply say, ‘I’m missing X days per week or month’ or whatever.”

Because CTLs tend to work independently, it doesn’t matter whether support equipment, such as dump trucks, can get into the work area. So if it’s too mucky for any other machine, the CTL can still be productive. The one consideration is transport; whether the truck and trailer hauling the CTL can get onto the site.

Tier 4 compliance is another factor. Tier 4 engines – and, on larger machines, aftertreatment systems – cost the same for a compact track loader as for a skid steer, but represent a smaller percentage price increase for a track loader than a skid steer. This has narrowed the gap in initial acquisition cost between the two.

Replacement costs of tires vs. tracks has always favored skid steers. Four tires might cost $800, while two tracks can be $4,000. Assuming tire and track service life is comparable, track replacement is five times higher over the life of the machine, and that assumption about service life may not hold up depending on the surfaces on which the two machines operate. One key to minimizing track replacement cost is for the operator to run the track loader like the track loader it is, and not like a skid steer, and limit functions that accelerate track wear. The prime example is the use of 3-point turns instead of counter-rotation.

If you’re working on both hard and unimproved surfaces, it may be best to invest in both a compact track loader and a skid steer. George MacIntyre of Case Construction Equipment offers this guideline: If 80 percent of the use will be off-road and 20 percent on paved surfaces, “consider splitting up your purchases between SSLs and CTLs.”

Maintaining proper track tension also extends track life, and IdealTrax on Mustang compact track loaders does just that. Tracks are automatically tensioned when the engine is running and allowed to go slack when the engine is off. Brian Rabe of Gehl and Mustang says IdealTrax can provide up to 15 percent longer track life, and because track tension affects overall efficiency, IdealTrax also reduces fuel costs. And the de-tensioning feature means tracks can be removed or installed in the field. Gehl says all of these features can lead to as much as $3,000 per year in savings.

Kevin Coleman of Caterpillar says that just as operators must treat a CTL as a tracked machine, service personnel need to be attentive to the unique needs of tracks and an undercarriage. “While roller wheels will need to be replaced eventually, the track and sprocket are the most commonly replaced items.” Coleman says that, as with other undercarriage-equipped machines, exchanging drive sprockets from one side of the machine to the other where possible will greatly extend sprocket life.

Applications once considered best left to skid steers are being overtaken by compact track loaders. It’s not just that CTLs can perform these tasks, it’s that they do them better. Compared to a skid steer of comparable horsepower, a CTL has more tractive effort for pushing and pulling, greater stability and lower center of gravity for managing attachments, and higher lift capacities for loading and placing. CTLs also often manage hydraulic performance better than do SSLs, giving them an advantage in applications with high-flow attachments and applications that combine the use of a high-flow auxiliary attachments with higher ground speeds.

Besides the skid steer market, others are feeling the effects of growth in compact track loader sales. Small dozers are being passed over for CTLs by some customers; CTLs can grade as well as dozers and do tons of tasks dozers can’t. Backhoes, utility loaders, tool carriers, and small wheel loaders also compete with CTLs, but those machines often have electronic sophistication CTLs lack. Joysticks, work and power modes, programmable attachment settings, and other advances are trickling into compact track loaders, but for now they’re a bit behind the curve. “As millennials and other tech-reliant individuals assume larger roles as company owners, we’ll keep up with their technology expectations,” says DeHoyos. “But for now, our simpler designs and limited electronics appeal to the current customer base.”

CTLs’ versatility and the huge range of available attachments beg the inevitable comparison to the Swiss Army knife. But just as there are limits to how much you can carry around on a pocketknife, there are limits to what you hang off your CTL, says Lars Arnold of Volvo Construction Equipment. “There comes a point where the machine is cumbersome and having so many tools is no longer beneficial. At that point, a specialized machine makes better sense.”

Aldridge says the versatility of CTLs has opened new markets for their customers. He cites stream restoration and the construction of recreational trails as examples.

Fat on both ends

While mid-sized CTL offerings have remained stable, growth at the ends of the size ranges has increased significantly. OEMs generally agree that machines under 2,000 pounds rated operating capacity (at 35 percent of tipping load) are small, and those more than 2,500 pounds ROC are large. There’s wiggle room on what constitutes mid-size. Some say 2,000 to 2,300 pounds; others go with 2,000 to 2,500, or even 2,600 pounds.

There was a time that smaller machines were gateway investments, says Gregg Zupancic, product marketing manager at Deere. “Before the cost increases of Tier 3 and Tier 4, customers started with smaller machines and moved up. That’s not happening as much now.” Customers with small CTLs find jobs for them and rent larger machines if necessary. Besides the lower initial investment and lower ongoing costs, smaller machines also are easier to transport, fit congested work sites, and are popular with rental companies. “We introduced five new models at World of Concrete this year and they were all on the smaller end of the size scale.”

While rental drives the need for smaller machines, contractors and owner-operators are interested in larger models. “Our T870 is our largest model,” says Eric Dahl of Bobcat. “Its 100-horsepower engine provides improved performance, especially with demanding attachments such as forestry cutters, planers, or trenchers.”

Larger machines are often the first to see technological advances, partly because their customer base is more likely to demand such features than are the rental companies and partly because it’s easier to embed development costs into machines with higher price tags. Bobcat, for example, offers a 3D grade control system pre-install package for use with Bobcat 96- and 180-inch heavy-duty grader attachments on their T650 through T870 compact track loaders. “We still offer loaders with standard instrument panels and key-switch ignitions,” says Dahl. “But the trend has been toward more technology, including keyless start systems and control panels with enhanced reporting and monitoring, and improved control of attachments. This is true with all sizes of machines.” 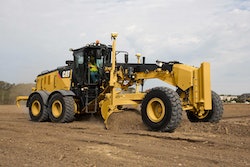 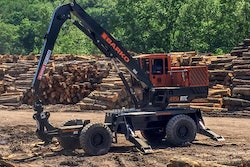 Barko launches 295B, 495B and 595B Rough Terrain Carrier log loaders 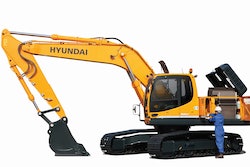