GPS Control for Excavators: How it works and how it can make an operator’s life much easier

This is the second in our four-part GPS/GNSS 101 series. To read more, click here.

A new and surprisingly useful evolution of this technology

When GPS/GNSS made its first debut in the construction world, dozers and motor graders were the machines of choice to use this earthmoving technology. With precise satellite data and 3D topo plans, operators could skim the last few centimeters of a site with full confidence that their blades were right on target.

In the past couple of years, though, some manufacturers also began to outfit their excavators with GPS/GNSS technology. And contractors are finding a wide range of uses for excavator machine control in addition to great safety benefits.

GPS/GNSS on dozers and motor graders measure the position of the blade’s cutting edge by putting a receiver antenna on the blade (although some newer dozer systems have done away with the antenna masts and use small inertial measurement units [IMUs] mounted to the body of the machine.)

With excavators, the receiver antennas are mounted on the back of the machine, on or near the counterweight. The exact location of the cutting edge of the bucket is determined by angle sensors on the stick, boom and bucket cylinders and calibrating the distance between the antenna and the bucket.

As with dozer and grader applications, excavator GPS/GNSS systems get their corrected RTK (real-time kinetic) positioning data from a base station set up at the jobsite. Likewise, the operator plugs a digital, 3D topo map of the site into the excavator’s monitor and either cuts to the line shown on the monitor (indicate mode) or puts the system into full automation mode and lets the GPS/GNSS positioning data guide the bucket to the exact contours of the design grade.

If you already have a GPS/GNSS system running your dozers or excavators, you can use the same base station and radio transmitter to guide your excavators at the same time. The RTK signal is broadcast over a wide area and can be used simultaneously by any number of machines on a jobsite.

With the precise positioning of the bucket’s edge made possible through GPS/GNSS excavator systems you get a number of benefits:

• No over-digging. The bucket stops at the exact bottom of the trench, so you never disturb (and consequently have to re-compact) the existing soil below grade. Also, you don’t have to fill in low spots with fresh material and you don’t have to put compaction equipment in the trench or the footings that you dig. Dig once, and move on.

• Safety. With the accuracy of the dig controlled by the GPS/GNSS data to a centimeter or two, you don’t have to put a rod man down in the trench to measure the depth and you don’t need the surveyor above ground calibrating the accuracy of your work. That reduces the risks of putting people in a trench and frees up two people for other tasks. This is a huge advantage, especially in deeper trenches where you would otherwise be required to use shoring boxes or cut back the sides of the trench – which often involves more digging than the actual trench.

• Cut complex contours singlehandedly. With GPS/GNSS guidance, the role of the excavator as the machine that hogs out the dirt before other machines come in and clean up behind it may be coming to an end. Culverts with flat bottoms and sloped sides, pads and mounds, and retaining ponds can all be carved accurately without disturbing the underlying soil and without the need for finish or cleanup machines.

• Precise slopes for pipelines. Gravity-fed water and sewer systems require extremely accurate downhill slopes over long distances. With the GPS/GNSS guidance an excavator can cut a 3-degree or 5-degree slope (or any number, for that matter) for a pipeline for miles without the need for regular surveying and the worry that you may have a high or low spot somewhere along the length of the trench.

At present Caterpillar and Komatsu offer factory-installed GPS/GNSS systems on their excavators. But you can also outfit other brands of excavators or older models with aftermarket kits from technology companies such as Topcon, Trimble and Leica. 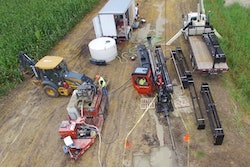 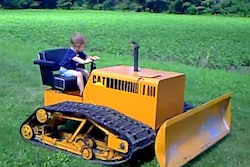 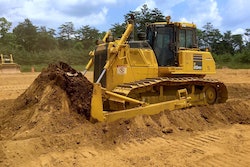