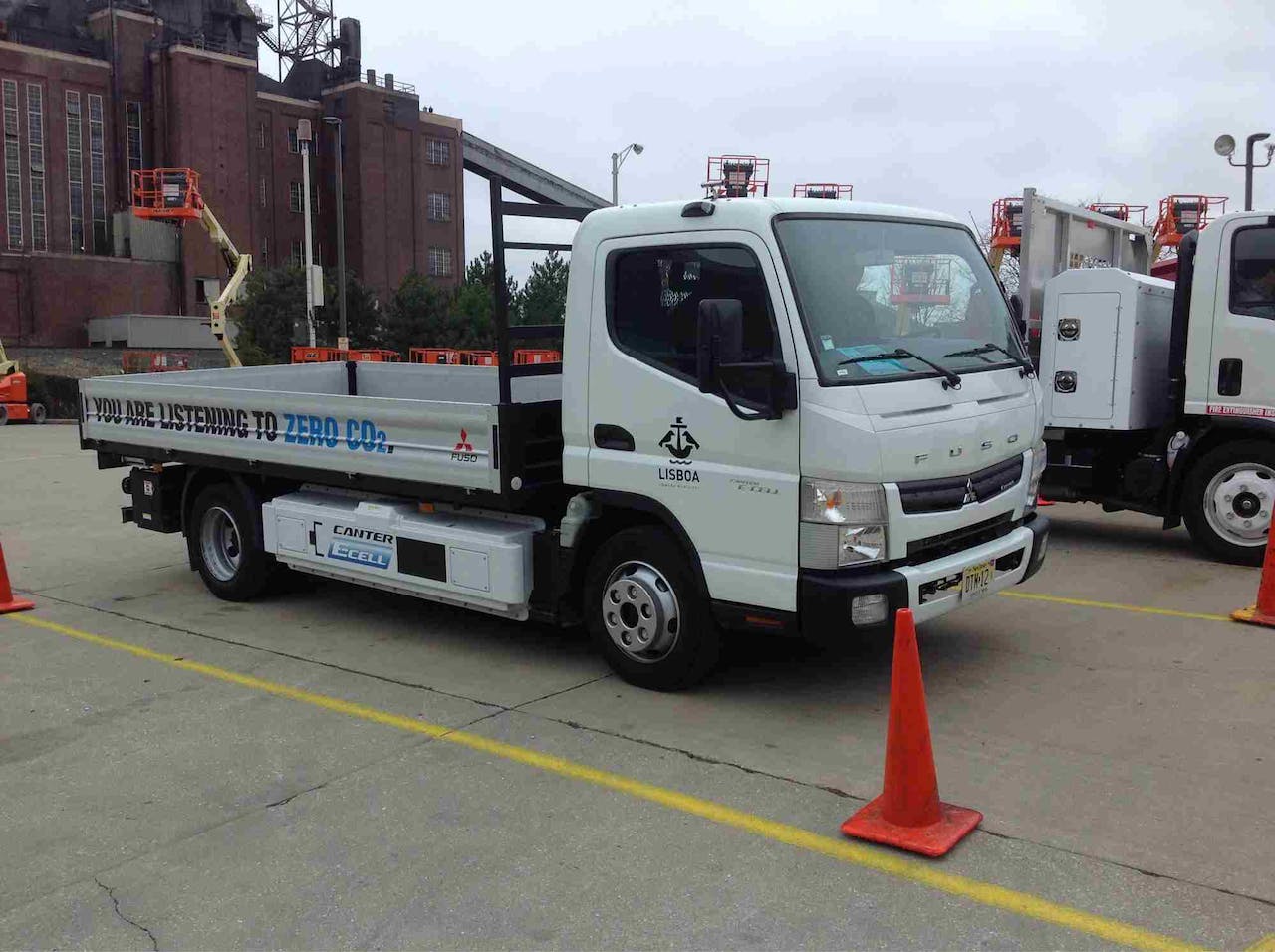 Though outnumbered by larger and more powerful trucks at last month’s NTEA Work Truck Show in Indianapolis, no vehicle garnered quite as much buzz as Mitsbubishi Fuso’s Canter E-Cell.

The all-electric work truck made its U.S. debut at the show. And since bringing you coverage of that unveiling, we’ve been able to hop behind the wheel and speak to Fuso engineers on response they’ve been getting on the truck.

“We’re very pleased with the feedback we’ve gotten,” Chris Burdett, a product engineer with Mitsubishi Fuso, explained to me shortly after we started our 10-minute test drive.

The flat-bed Fuso I was driving, with Burdett along as passenger, had come from Portugal where it had undergone testing for a year. Burdett explained that in Portugal the Canter E-Cell had been configured into four flat-beds and four box trucks.

The four flat-beds were used in horticultural applications, while their box truck counterparts were used to move goods to a warehouse. Given a range of only 60 miles, driving is limited, but Mitsubishi Fuso is optimistic about the truck’s future capabilities, even going so far to say that before it is released to the U.S. market a PTO will be available.

After racking up 32,000 miles in a year (it’s unclear if those are collective miles), Mitsubishi Fuso reports that its E-Cell trucks produced a cost savings of 64 percent over a diesel Canter. After considering sources of electric power, carbon dioxide reductions of 37 percent were realized in the E-Cell truck.

A standard, 230-volt, 30-amp charger can charge the E-Cell in about seven hours. A proprietary charger rated at 290 volts and 100 amps can vastly reduce charge time to about an hour.

Activating the truck involves simply turning the ignition key until an affirmative beep confirms that you’re ready for driving. Placing the vehicle into drive required more effort than I was comfortable with. This can be chalked off to unfamiliarity with the shift pattern and also to the small LED display on the dash which indicates shifter position.

Before getting underway, Burdett explained that by lifting my foot off the brake, the creeper mode would engage and move us along nicely past others standing and waiting in the parking lot.

He was right. I didn’t have to touch the accelerator as creeper mode propelled the truck at a comfortable rate of speed to the parking lot’s exit.

The honeymoon continued as I turned right onto a four-lane street and headed towards the first traffic light. (Test drives mostly involved traveling a block or two around the convention center.) I couldn’t help but smile as the E-Cell’s quiet 150-hp equivalent motor quickly began delivering on its rated 479 foot pounds of torque.

However, as I took my foot off the accelerator, I learned the hard way about the truck’s powerful regenerative braking, the force of which sent me forward in my seat. Burdett explained that the truck’s regenerative braking system was designed to replace an exhaust brake found on a conventional truck. We were not carrying a load at the time of the test-drive.

“We have disc brakes on this truck and that will make the pads wear faster, which will mean having a higher maintenance interval,” said Burdett, who works in Japan. “In order to reduce that, we have the exhaust brake in the regular (Canter) and for this we have the strong regenerative braking.”

Since the 110-kW emotor, as Burdett calls it, is especially quiet, a VSP, or vehicle sound for pedestrians, was implemented. An audible whirring sound alerts nearby pedestrians and becomes louder as the truck accelerates.

Though the morning snow had already melted, it was still cold out, so I asked Burdett if I could turn on the heater. As the cab’s blower fan came to life, I asked Burdett about the impact the heating system would have on driving range.

Interestingly enough, the heating system operates much like a conventional system. However, with the absence of a heat source from a combustion engine, Mitsubishi Fuso engineers use an electric heating element to heat up water which in turn makes its way through a conventional heating system.

“We didn’t want to change the components so much,” Burdett explained. “So we used the available components and replaced the one that went missing—the engine with the electric heater. There’s heat-pump technology and much more efficient ways to do that and we’re looking into those.”

That’s a good thing because it wasn’t until we got back to the parking lot about five minutes later that the heater really finally warmed up.

With no load on the back of the truck, it was easy keeping up with moderate traffic. However, having no load appeared to make for a more jarring ride: we felt every bump along the way, more so than the other three trucks that I test drove that afternoon.

“It may be because the center of gravity is a little bit lower,” Burdett said of the rough ride. “I personally think it’s just the regular Canter. It’s definitely better when it’s loaded.”

Shortly after making our third turn, I asked Burdett if I could test the truck’s acceleration. He said he didn’t mind. As expected the truck’s 479 foot pounds of torque responded quickly and quietly and moved out all 13,230 pounds of the truck without much effort. It would have been nice to have tested acceleration with a load; the truck’s max payload is 6,470 pounds.

I told Burdett that the truck’s acceleration was “nice and smooth” and he said he had been hearing that a lot from test drive participants.

On the last half-mile or so of the trip, I asked about the Eco Fleet Pro device installed in the dash. Burdett explained that the device enabled Mitsubishi Fuso to keep track of various performance levels in all eight of the Canter E-Cell trucks in Portugal, including state of charge of the battery packs, temperature of the battery packs, distance traveled in a day and average speed.

Information gathered from the electric Canters in Portugal will be used alongside feedback gathered elsewhere, including in the U.S., to help make improvements for the second-generation electric truck.

“We’re going to try and release it to Japan first, but it’s under consideration now,” Burdett said. “One of the reasons that we brought this truck at this time is to try and convince the decision-makers to let us put one in America as well—to at least get some fleet going in America. We’ve had a lot of good feedback from corporations.”

In the meantime, participating in vehicle shows and test-drive events provides more opportunities for exposure and valuable feedback.

“This vehicle is here to generate market interest and to get a certain level of response,” Burdett said. “We’re trying to figure out what kind of improvements we can make to this design especially to fit the American market better.

“What are the requirements of American drivers? And then how we can take that into our next generation which is under development at the moment. When we do bring it into production we do want it to be perfect for the American market as well.”

The second-generation Canter E-Cell is scheduled for release in 2017, and hopefully by that time, its range will be worth bragging about. 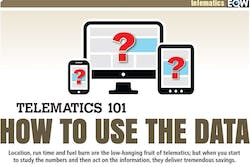 Telematics 101: How to drink from the fire hose of heavy equipment data 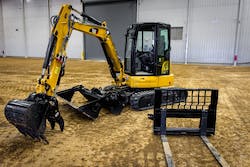 POLL: What do you think of Cat’s new half excavator, half skid steer 304.5E2? 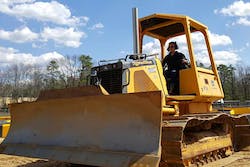 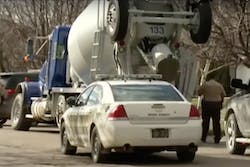