The UTVs have the same 24-horsepower Kohler diesel engine that powers the existing MY15 3400 and 3400XL models; however, the 3650 in particular improves upon the versatility of the product line by having the ability to operate front mounted PTO and non-PTO attachments.

Both the 3600 and 3650 feature a hydrostatic transmission system that makes the UTVs especially suited for applications that include repetitive back and forth movements such as hauling and mowing, as well as cleanup jobs such as snow removal and sweeping.

The hydrostatic system also has dynamic braking—a feature that ensures the UTV is easier to control under load by closing a valve in the drive motor when the operator lets up on the travel pedal, which blocks the oil flow and slows the machine.

The new UTVs, which Bobcat says have industry-leading payload capacity for towing and hauling, have independent front dual A-arm suspension and rear de Dion suspension, boosting stability when hauling and towing heavy loads. The operator can choose the appropriate speed based on the load, enabling moving light loads at faster speeds.

When using the seven available attachments for the 3650, the operator can use the throttle independently of the travel control pedal, which enables the operator to set the engine speed without using the accelerator pedal to increase the engine’s rpm.

The UTVs have a range of features designed for transporting passengers comfortably, including a three-passenger bench front seat and tilt steering on the 3600 and standard bucket seats on the 3650. Both models provide 360-degree visibility, three-point seat belts, power steering, ergonomic controls and a modular cab. Air conditioning and heat is available as an option.

The 3650 also features Bobcat’s proprietary Multi-Attachment X-Change, or M.A.X., system. The M.A.X. system allows the 3650 to power PTO-driven front mounted attachments that include angle broom, mower and snow blower, and non-PTO attachments such as a bucket, grapple, pallet fork and snow blade. An optional 60-gallon sprayer can be mounted in the cargo box.

Both models have automatic engine shutdown, which ensures the engine will shut down in the event of high engine coolant or hydraulic oil temperature. 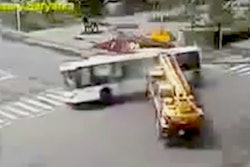 Crane crashes into bus, passengers jump from windows and scurry away 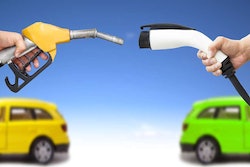 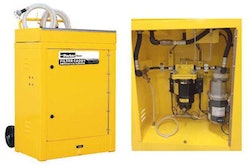