Fire prevention is everybody’s job, but there is one person who can do more than most to keep heavy equipment safe from fire, and that is the technician. The reason: most fires happen when something on the machine is neglected. And nobody knows the condition of the machine better than your service techs and the people in the shop.

Fires are rare on new and well-maintained equipment. “But remember the vehicles or equipment that come into your shop are the ones that have the problems,” says Suzanne Smyth, a PhD and physical engineer who investigates fires for Exponent, an engineering and scientific consulting firm.

We talked to a handful of engineers whose job it is to investigate heavy equipment and industrial fires to find out the most common sources of fire and what you can do to prevent them. Here’s what they told us.

There are two basic contributing factors to any fire, a source of ignition and a source of fuel. Ignition can be a spark or a flame or just high heat, but in today’s complex heavy equipment there can be multiple sources.

Turbochargers. Although the turbocharger sits high up on the engine it is a constant source of  high heat. “On an excavator the main hydraulic valve sits right behind the turret in a bank behind the engine,” says Daniel Olson, a licensed professional engineer and certified fire investigator for Warren Forensics. “Most manufacturers put a good firewall there, but if you get a 3,000-psi mist of hydraulic fluid you are going to get a combustible mix of hydraulic fluid and air. Depending on the fuel-air mixture you can get something pretty bad happening; not explosive, but it will track back to the source of the leak very quickly.” And turbos get hot enough to ignite just about any type of fuel, including debris. “The most important thing people can do is to keep that engine clean,” Olson says.

Overheated components. There are other sources of high heat that can catch you unawares, says Smyth. On heavy equipment overheated exhaust manifolds, seized bearings or locked brakes can generate enough heat to ignite many different sources of fuel, she says.

Frayed wiring. Another source of ignition that shows up frequently in forensic investigations is frayed wiring. “I see a fair amount of damaged wiring, and a lot of that having to do with the addition of aftermarket equipment,” Smyth says. Incorrectly installed wires can chafe against other components or the frame of the machine or rub against the articulating piece of a machine. Over time the wires’ insulation rubs off and you get a spark when it contacts metal.

Tires. The rubber used in today’s heavy equipment tires is not a source of ignition, but, tire vendors have told us that poor maintenance and tire changing practices sometimes leave small shards of metal inside of a tire. If the air inside the tire becomes overheated due to under inflation, too much load or too much speed it can cause these small bits of metal to catch fire and in turn the burning metal can start the rubber burning. And once a tire starts to burn, it is almost impossible to extinguish. It has to burn itself out and in most cases it’s going to take the rest of the machine with it.

Batteries. Although vehicle batteries are not often the source of ignition in fires, they should not be ignored by technicians, either. A high resistance situation that causes overcurrent could cause the insulation on wires to burn, says Olson. Batteries are more of an issue when you are storing or charging them in the shop, says Smyth. “Anytime you are charging or storing batteries you should consult the codes and directions,” she says.

Hot work. Grinding, welding, brazing, soldering, any work or tool that generates sparks or heat, should be kept well away from any source of fuel. All fire codes require this and some are more strict than others so be sure to check with local code officials. Be especially vigilant when welding or grinding on equipment that may have fuel or oil leaks or debris that could catch fire. Clean first, then work.

Hydraulic fluid is slightly less flammable, with a flash point of 400 degrees Fahrenheit and an auto-ignition point of about 650 degrees Fahrenheit. The sources of hydraulic leaks are likewise poor maintenance, fittings, spills and worn hydraulic lines and it is certainly no less a threat than diesel.  Olson recalls a situation on a mining truck where a rubber fuel hose was used in place of what should have been a steel hydraulic hose. Because of the constant pulsing of the hydraulic system, the hose sprung a leak. “That hit the turbocharger and seven hours later, after 1,200 gallons of fuel, six 57,000 pound tires and 300 gallons of hydraulic fluid, the fire burned itself out,” he says.

Debris is high on everybody’s list of fire hazards. Land clearing and forestry applications throw huge amounts of flammable material onto and into heavy equipment, says Olson. In landfills there are paper and plastic bags getting torn and shredded and those can get sucked up by the cooling fan or wrapped up under the machine. It is essential that you keep this debris cleaned out of the machine. If debris is a constant issue, look for equipment that has reversible cooling fans that clean out trapped debris. These are also available aftermarket. And you may want to look into installing an aftermarket fire suppression system on jobsites where the fire risk is high.

The best place to put your first efforts in creating a machine and shop environment that reduces the risk of fire is to clean your machines on a regular basis. Removal of debris and pressure washing are fundamental.

“That way you reduce the chance of igniting accumulated debris and you get a better view to all your lines and cabling so you can tell more easily if something is starting to rub, or you’re starting to get a puddle of something accumulating,” Smyth says. “With regular inspections of fluid and electrical lines you’re going to catch abrasion before it gets to something more serious.” 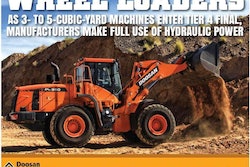 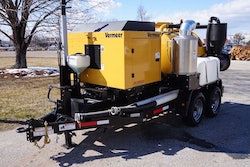 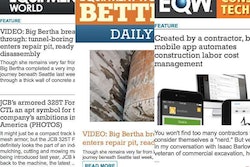 Three ways to keep up on the construction equipment news front