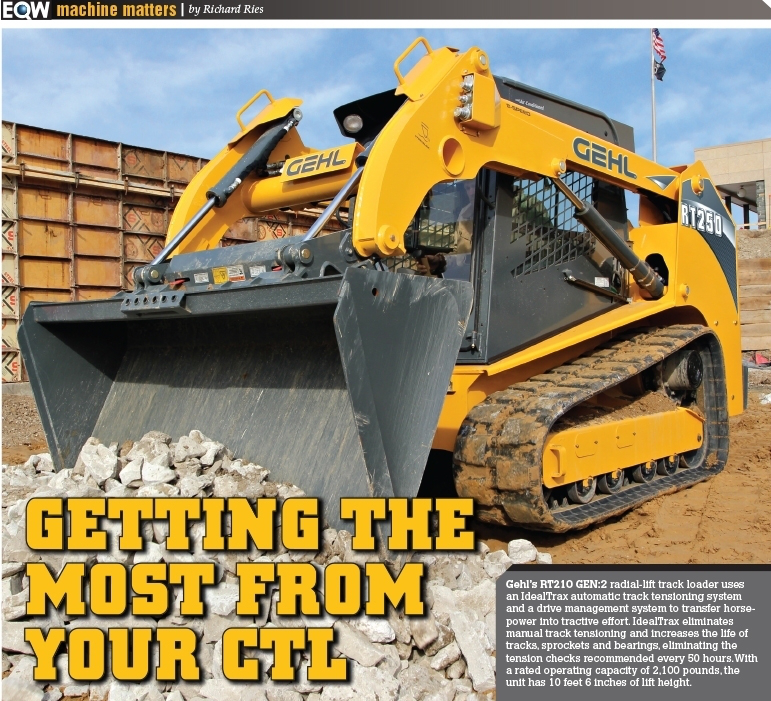 Compared to skid steer loaders, compact track loaders cost more, have slower travel speeds, are better in soft underfoot conditions, and handle slopes better. Common knowledge. But if your assessment of the performance of CTLs and their potential for your business stops with the commonplace, you can’t make the right decisions regarding their use.

First, the cost factor. It’s true that a CTL typically costs 30 percent more than a comparably-sized skid steer, which amounts to an upcharge of $10,000 to $15,000.

But that CTL will offer performance advantages that increase productivity and may more than offset the initial cost over the service life of the machine. One of the challenges for contractors making the switch from skid steers to CTLs is to make accompanying changes in their business practices, according to Mike Fitzgerald, product specialist with Bobcat.

“Assess your work practices and procedures and related billing charges to maximize the advantages of a CTL,” he says. “Faster production means you can move on to another job sooner and you’ll be able to work on wet days when you otherwise could not.”

“The intent is to reflect the understanding that CTLs are more likely to be operated on soft ground and on slopes, and the 35 percent figure is more realistic in these conditions,” says Arnold. So if an skid steer and CTL both have tipping loads of 7,000 pounds, the skid steer will have an ROC of 3,500 pounds and the CTL of 2,450 pounds. (Even OEMs that list a CTL’s 50 percent figure first will provide the 35 percent number as well.)

A big factor in the cost of operation of a CTL is in the tracks and undercarriage, but that’s largely controllable, says Jamie Wright, product manager at Terex. “The most common cause of premature track failure is operating technique. Many operators run their CTLs as they would skid steers, doing counter-rotation spin turns and spinning the tracks when driving into a pile to more fully fill the bucket. These practices will increase wear and tear on tracks, especially in rough underfoot conditions.”

He advocates running CTLs as any other crawler machine, using three-point turns, alternating turns to the left and right to even out undercarriage wear, minimizing backing, and avoiding sudden changes in direction. 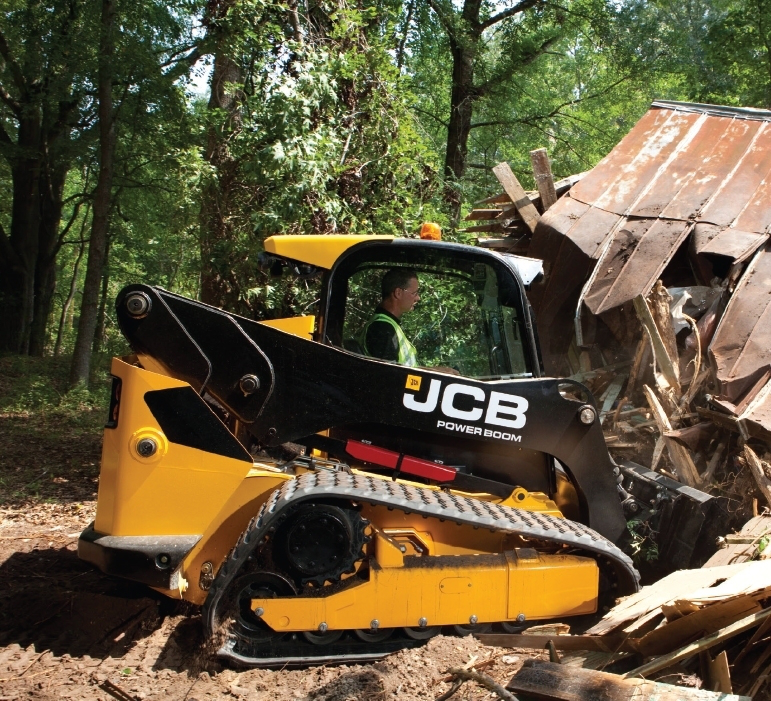 Powered by the Ecomax engine, which uses up to 9 percent less fuel than previous engines, the JCB 300T uses a new air filter design with a high-efficiency active scavenging pre-cleaner, extending air filter service life up to 500 hours. Electro-hydraulic controls give you three levels of response, from slow modulation for fine trimming, to faster controls for digging and loading.

Wright says payback on a CTL is approximately 18 months when the machine is managed properly to take full benefit from its advantages.

Sometimes it goes beyond the application to the attachment used in that application, explains Gregg Zupancic, marketing manager with John Deere.

“Typical ground pressures are 30 to 35 psi for skid steer loaders and 4 to 6 psi for compact track loaders, making skid steers better for blade-type snow removal despite CTLs’ greater push. A skid steer’s higher ground speed also facilitates snowplowing. With a snowblower attachment, the CTL may be a better choice because speed is less important for results and the CTL’s better tractive effort emerges as an advantage.”

Arnold says one spec to watch is operating weight. “A CTL will have about 20 percent more weight than a comparable skid steer, which may raise transportability issues.”

Essentially all attachments that work on a skid steer will work on a compact track loader, and CTLs and skid steers of comparable size have comparable specs as far as dump height and reach. But CTLs’ more stable demeanor gives them the edge in some tasks, such as front grading. (The distinction disappears with back grading and either type of machine performs that task well.)

CTLs are also great for trenching, says Warren Anderson, brand marketing manager for Case. “Trenching typically takes place in a finished yard, and CTLs provide minimal rutting and low ground pressure. And as with grading applications, CTLs provide a smoother and more consistent path with a trencher due to their great stability and lower tendency to bounce.”

Anderson says CTLs also react better to obstructions and surface irregularities, tending to glide over them rather than moving up and over, as does a skid steer.

“Asphalt profilers are becoming popular on CTLs,” says George Chaney, international sales manager of skid steers and CTLs at JCB. “With their greater lift capacity, lack of bounce, and overall greater stability they produce a much tighter finished spec.” 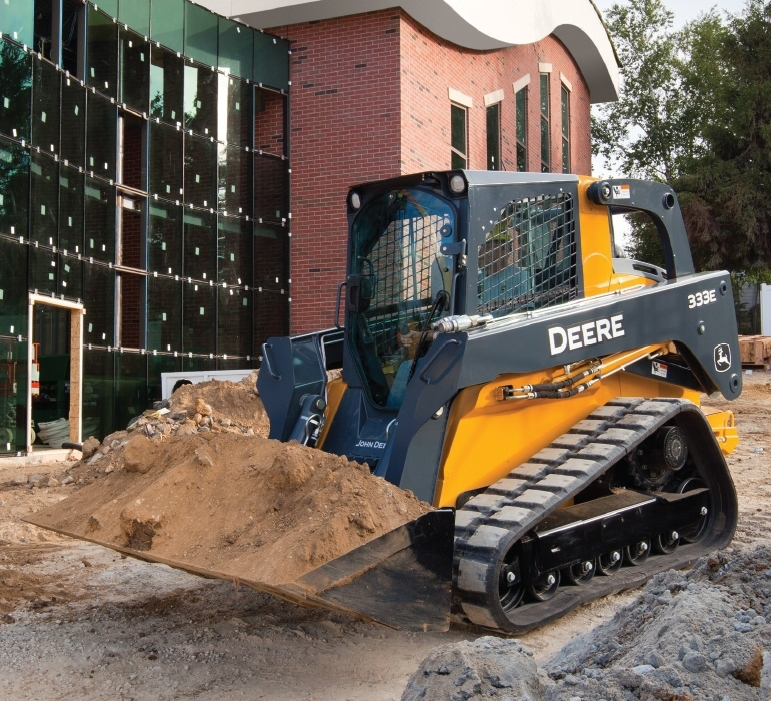 The E-Series compact track loaders offer 25 percent more foot room than previous models. Low-effort electric-hydraulic controls on the 333E are available for ISO, H and foot control patterns; an option allows you to switch between all three control patterns. Powered by a 3.3-liter diesel, the large-frame model has up to 10 percent more horsepower than the previous D-Series models.

Kelly Moore, product training specialist at Gehl, says landscape tools are an especially good match for the operating characteristics of CTLs. “Ground preparation, leveling, and finishing work are perfect uses of a compact track loader. But,” he warns, “this assumes the general conditions are suitable for a CTL.

If conditions are not right for a CTL, if there’s a lot of rock or other hard, abrasive material, a CTL is not the right machine for the job no matter how well it matches the attachment required for that job.”

With their high lift capacities, CTLs can carry some big attachments and the weight of the attachment may not be the limiting factor in matching it with your CTL. So Wright emphasizes the importance of matching an attachment with a loader’s hydraulic system.

“Pay attention to the attachment’s flow requirements,” he says. “If the hydraulic system is underrated for the total demands of the CTL and its attachments, operation may be sluggish with attachments requiring continuous flow, such as augers and brooms. Or the CTL may cut flow to the attachment altogether.” He recommends working with the dealer from which the CTL was purchased to ensure desired attachments will work with a given CTL.

CTLs may be prone to overheating in applications with high hydraulic requirements if performed in hot conditions, says Zupancic. One example would be cold-planing asphalt on a hot day. This is because the CTL’s undercarriage and tracks put additional load on the hydraulic system. “This doesn’t mean CTLs can’t be used for these applications,” he says. “It does mean that operating technique and machine maintenance become even more important.”

Interestingly, sources diverged on the suitability of CTLs for forestry and land clearing. Some said those applications were perfect for a CTL’s power, tractive effort, stability on slopes, and ability to handle heavy attachments.

Others said the presence of sapling stumps and other harsh materials would compromise track life. The disparity underlines the fundamental distinction between a compact track loader and a skid steer: aggressive underfoot conditions generally exclude CTLs and favor skid steers.

Operators are more productive when using a familiar control pattern, so most OEMs provide choices. Deere offers three: joystick controls with switchable ISO or H patterns and foot controls. Joysticks on Volvo machines can be switched between ISO and H pattern; Volvo does not offer foot controls. Case also offers ISO and H patterns via a rocker switch and operators can further adjust machine performance with up to nine presets through the EZ-EH (electrohydraulic) controls.

Some OEMs offer only one size of tracks with their CTLs. Bobcat offers two, a standard and a wide. Volvo offers two widths – 12 and 18 inches – for their mid-range MCT110C and MCT125C models. JCB’s track options include turf and all-purpose. Terex offers three tracks: general purpose; smooth/turf; and extreme terrain, with 10 percent more width and aggressive track treads.

Track tension is key to minimizing problems and costs with CTLs. Too loose, and the machine can de-track. Too tight, and undercarriage and track wear are accelerated. Track tension should be part of every day’s walk-around and the tracks tensioned as required. This usually takes only a few minutes and is accomplished by adding or bleeding grease from a cylinder that expands or contracts to adjust tension.

Gehl machines offer IdealTrax Automatic Track Tensioning System. “The system automatically tensions the tracks at start-up,” says Moore, “and it maintains correct, continuous tensioning while the machine is operating. At shutdown the tracks automatically slack, reducing load on the tracks, bearings, and rollers and extending the service life of those components.”

Anderson advises customers to consider the impact of emerging Tier 4 regulations. “As Tier 4 Final continues to roll out to other engine power categories, it will be important to assess the unique service and repair requirements of machines with Tier 4 Final power.” He says it’s best to find machines with minimal demands related to emissions control systems, “because these machines are often operated and serviced by numerous people throughout an organization with varying levels of technical expertise.”

“There is a specific place in the market for CTLs,” says Wade. “They go hand-in-hand with skid steers but work in different environments. Customers need to evaluate their working conditions and use the machine best-suited to those conditions while also adjusting their business practices to take advantage of that machine type’s strengths and weaknesses.”