A new article from Slate makes you wonder: are we wasting our time trying to improve battery technology to power our vehicles when we should be working on capacitors?

Electric and electric/fuel hybrid vehicles are steadily growing in popularity. A recent ExxonMobil report forecasts that hybrids will become much more affordable by 2025 and by 2040 they will make up 40 percent of all vehicles on the road and more than 50 percent of new car sales. And that’s probably a conservative guess.

Even diesel vehicles are gaining popularity at a fast rate due to consumers’ demand for better fuel economy. ExxonMobil expects diesel to jump gasoline as the number one choice for transportation fuel by 2020.

Honestly, we could get past batteries’ lack of energy density if they would just recharge faster. Who cares if this electric car only gets me 200 miles to the charge when a five-minute juice-up puts us back on the road. And that’s where capacitors shine.

Capacitors, though they are even less energy dense than batteries, recharge quickly. So researchers have been working to create “supercapacitors” which not only recharge quickly but also pack more energy.

A material called graphene is helping researchers along this path. The problem is that graphene has, up until this point, been pretty expensive to produce. But with the discovery made by UCLA grad student Maher El-Kady, graphene just got a lot cheaper to make. So how’d he do it?

“The appeal of this technique is that anybody could do this—it’s really simple,” UCLA chemist Richard Kaner told Slate. “You take a piece of plastic, buy some graphite oxide, stick it in your CD drive and turn it into graphene.”

Surprisingly, this technique “makes the most efficient carbon-based supercapacitors that have been made to date.” However, researchers say they still have to figure out how to produce these more efficient supercapacitors on a larger scale. They’re hopeful we’ll start to see the benefits of supercapacitors in the next five or 10 years.

Initially, supercapacitors could be used to replace batteries eventually, but initially they could work alongside them. For instance, because it charges quickly, a supercapacitor could handle the process in a hybrid vehicle of storing kinetic energy created by braking and using it to provide bursts of energy for acceleration. Kaner has grander ideas though.

“The ultimate vision I could see is that even if you had to charge your supercapicator-powered car every 20 miles, you could have a lane on the freeway that was a charging lane,” he told Slate. “As long as you drove in that for a sufficient time, your car gets charged.”

Financed equipment volume down 6% in February 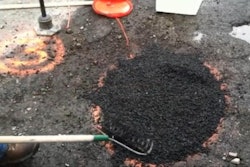 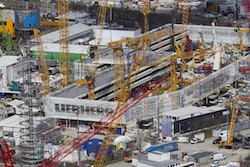