If you were to ask Robert Smith, he’d tell you – he’s glad he found a new niche.

After four decades in the asphalt paving business in and around Chattanooga, Tennessee, Smith has seen the highs and lows of a trade entwined with a fluctuating economy and volatile commodity prices. It’s a brutally competitive business. And so it was with a mixed sense of need and opportunity that Smith began dabbling in roller-compacted concrete – a heavy-duty cement mix that can be poured as quickly as asphalt.

Over the past seven years, Smith’s company has perfected the process of placing thousands of cubic yards of roller-compacted concrete in just a few days’ time for its industrial client base. As word has gotten out, Robert Smith Inc. has transformed itself into an RCC specialist, and now more than 90 percent of its workload is in roller-compacted concrete.

Smith credits his newfound niche in RCC for helping him through the economic recession.

“It scares me to think about where we would be if we were still competing in asphalt,” Smith says. “I’ve been in this business for 40 years. I’ve seen so many people come and go. I just don’t even want to think about what we’d be doing if we still relied on asphalt jobs.”

Smith’s story is one that’s high on resilience and opportunistic risk-taking. Smith worked years for his father-in-law but struck out on his own in 1989. At the time, his company consisted of himself, his wife, his son and five associates.

At its inception, the firm was strictly an asphalt-paving company. About seven years ago, however, things began to change. Clients began coming with requests for roller-compacted concrete.

RCC isn’t a new product. It has been around for decades. But it hasn’t caught on in many parts of the country as it competes with asphalt and the more traditional poured-in-place concrete. RCC is designed to bring the two together – offering the ease of placement of asphalt and the high-impact durability of concrete.

RCC consists of the same basic ingredients as traditional cement mix, although in different proportions. It is placed with asphalt-style pavers, equipped with high-density screeds, and rolled to a finish with roller compactors.

In the early days of his RCC work, Smith sculpted surfaces using small motor graders and rollers. Then he landed a career-altering job – a 60,000-cubic-yard project at a nearby Volkswagen plant. It required an investment in a paver that could handle RCC jobs for the long haul, and so Smith chose the Volvo ABG7820 paver.

At a recent job in Dalton, Georgia, Smith’s crew was placing the final sections of a 2,000-cubic-yard industrial lot for a Shaw Carpet facility. The site would be used as parking for tractor-trailers, making durability a significant factor in the project.

Smith’s paver made quick work of the job. Dump trucks dropped more than 7 cubic yards of concrete into the paver’s hopper. The machine’s flexible screed was set 22 feet wide, and its dual tampers compacted the concrete to 96 percent density. Workers could walk on the cement – poured 5 ½ inches thick – immediately after it was placed.

A pair of Ingersoll Rand rollers (which have been manufactured by Volvo Construction Equipment under the Volvo brand since 2007) brought the concrete to its final density and smoothed off the surface with just two passes. Later, it was treated with a wax-based curing compound.

Today, Robert Smith shudders when he thinks of where he would be without his plunge into the RCC niche. He started in asphalt when he was 20 years old. He’s 64 now.

“I think the RCC has actually helped me through the hard times,” Smith says. “We’ve become very good at it. If I was doing straight asphalt, I might be laying off people and running a small crew. The asphalt business is really competitive right now, but in the next 10 years, roller-compacted concrete will be the way people go, especially on industrial jobs.”

Editor’s Note: This story was edited with materials provided by Volvo Construction Equipment.

Reading between the lines at pre-Bauma 2013: What to expect from the big show 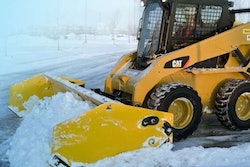