Bobcat will launch its four new M-Series loaders and three M-Series excavators, as well as showcase a variety of interactive displays, at ConExpo/Con-Agg 2011. Bobcat is extending the M-Series, “next generation” line, which unveiled its first models in 2009 with the 700-platform machines.

Bobcat will also launch competitive comparison videos for ConExpo, and the host of the videos, Perry Rust, will be on site assisting customers as they access the videos. 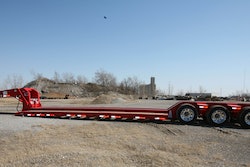