“We were bursting at the seams.”

Steve Benck, West Side Tractor Sales president, says that was one of the primary motivators behind the John Deere dealer’s move from its longtime Naperville, Illinois, headquarters to its new location in Lisle, Illinois.

And after a series of growth spurts – including doubling the size of its footprint in 2010 when it expanded into Indiana and Michigan – another realization emerged.

“Our Naperville facility just wasn’t representing what we feel we bring to the market,” Steve says.

Because the 3.5-acre Naperville headquarters had become such a tight squeeze, the company had farmed out several functions to other locations in its 11-store footprint. Warranty processing, for example, was at one branch and fleet management at another.

Relocating in the greater Chicago area, however, can be problematic. The things West Side Tractor required – enough acreage to grow, easy access to expressways – were also attractive to major retailers with deeper pockets. The need to move heavy equipment on and off site took industrial parks off the list.

The company finally settled on an 11-acre former car dealership vacated in 2008. The 83,000-square-foot main facility would be refurbished into office space, and the former car shop converted into parts and whole goods warehousing.

As it turns out, the Lisle move was a homecoming of sorts. West Side Tractor co-founders Rich and Mary Benck started the company in Lisle in 1962 and moved it to its longtime Naperville location three years later.

A sticky issue always crops up, though, when dealers want to build: which of its great customers will get the bid? West Side Tractor instead chose to perform its own site development work, a process helped by much of the infrastructure being already in place. The company hired operators and equipped them with machines from its fleet.

In the process it also gained some credibility with customers, says Tom Benck, vice president. “They saw that we actually knew what we were doing.”

“You need to have at least 20 feet below the hook of the crane to get cabs off tractors,” Steve says. “Our service manager really lobbied hard for a lot of overhead cranes, and we ended up putting eight of them in, which is kind of unheard of. For him, it’s about efficiency. In every two of our 16 bays, guys can share a crane. There’s little waiting around for a crane to be freed up.”

It’s also a reflection of the fact that West Side Tractor now offers larger equipment than previously. The company needed to be able to get anything inside the shop that could be transported by truck.

Each technician now has a tool bench, workstation and laptop in a bay that provides plenty of room on each side of the machine, Steve says. With access to abundant Wi-Fi, technicians can run diagnostics, search portals, access records and update work order details as work is being done.

The shop also has separate areas for handling heavy machines and compact machines. Fluids have been plumped throughout the shop with reels in each bay.

The company repurposed the former dealership’s carwash into a separate wash bay. “We now have a large wash rack and then three smaller ones for smaller equipment,” Steve says. “So many times, wash bays are in the shop, which really brings a lot of extra moisture and dirt and grease into the area. It’s great having all that moisture away from everything.”

“Our service manager and his team really pushed to make their processes efficient,” Tom says.  Large touchscreens help the service manager schedule all jobs open in the shop by employee. A live map shows all service vehicles on the road.

Customers can use a kiosk on the showroom floor to search used equipment, order parts, send product brochures to their email inboxes and get additional information on the antique machines on display (more on that later).

Before the move, the company had started transitioning from shelving to Vidmar cabinets. The new parts area is designed so employees can easily access parts in these cabinets in areas right behind the counter.

And there’s capacity to grow. Noting the growth of online parts ordering, the new facility has areas that can be converted into a fulfillment warehouse concept.

And now West Side Tractor has its first John Deere-certified rebuild facility, which includes a clean room with craning capabilities to easily rebuild engines and other components on production-class machines.

“Year after year we’ve improved our market share in the mining industry with large articulated trucks and 100,000-pound-plus excavators,” Tom says. This means there’s now a substantial machine population in these size classes.

“These machines are more expensive and there’s more entailed in remanning them,” he adds. “This facility is really going to help us be efficient because of its cranes, the size of the bays and the size of machines we can get in there.”

The industry-wide problem of finding technicians prompted the company to pay attention to its technician-specific facilities.

“We spent quite a bit of time with the layout of our breakrooms, creating really nice locker rooms, putting in ice and vending machines, all designed to make it a positive experience,” Steve says. “We’d like to use it as a recruiting tool.”

And with an eye toward attracting more women into all areas of the company, it put in separate locker rooms for women and a lactating room.

“West Side Tractor is 50 percent female owned,” says Lauren Coffaro, marketing and technology manager and a third-generation West Side Tractor owner, “and it’s important to recruit females into this industry and as technicians.  We went with the whole if-we-build-it-they-will-come idea.”

West Side Tractor relied on its own experience when designing the shop, but used a design agency to create its headquarters building.

“We wanted to create a space that is representative of the talent and capabilities of our team,” says Diane Benck, vice president of operations.

These included collaborative spaces such as a training facility and several areas for impromptu meetings.

Historical twist on a showroom

Taking a cue from John Deere’s corporate collection, some of which is housed in its downtown Moline, Illinois, Pavilion, the Bencks put in a floor-to-ceiling glass showroom featuring 10 antique machines.

It represents part of the collection co-founder Rich and the family have acquired through the years. “There’s always a story to go along with the pieces,” Tom says. “It relates so much to where we came from and where we’re going.”

Throughout the years, pieces of the collection have been displayed at various company locations. “It’s something customers like; it’s a conversation piece,” Tom adds.

Machines displayed in the showroom include a 100-year-old Waterloo Boy, which marked Deere’s entrance into the tractor market, and a 1959 Deere Model 440 backhoe, one of the first machines Rich sold, with a decal from the company’s original Lisle facility. The backhoe was found last year in a farmer’s barn in Joliet, Illinois.

Deere’s latest models will be positioned right beside the historical machines. The showroom will be used for events and to draw people into the dealership.

The latter is already happening.

A 14-year-old boy walked into the showroom one day with his mother, relates Coffaro. He had started a lawn care business and was looking at what his next step would be.

“His mother said they just wanted to look at the equipment and that he’s talking about going into technical school,” Coffaro says. “He’s in high school and he loves equipment.

“For me, that is the purpose of this space,” she continues. “As a family, we talk about how we can inspire the next generation into the industry. This space gives us the ability to do that.”

For an overview of West Side Tractor’s facility, check out this video: 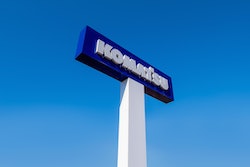 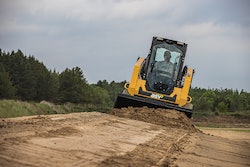 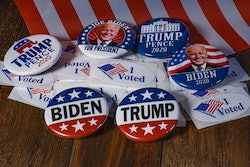