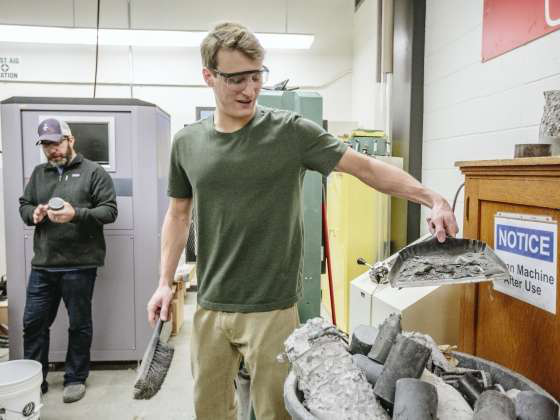 Researchers at Montana State University (MSU) have developed an ultra-high performance concrete that is approximately five times stronger than regular concrete, according to a university press release.

The Montana Department of Transportation (MDT) asked Michael Berry, a professor in the Department of Civil Engineering, if the university’s Norm Asbjornson College of Engineering could help develop a more affordable, non-proprietary version of ultra-high performance concrete. What MDT had been purchasing from suppliers was costing 20 times more than regular concrete, making it prohibitive to use.

Berry and his team of students used hydraulic crushers and other tools to develop the special concrete and published a report in December 2017 that offers ways to make it for less than half the cost of purchasing it. The material’s strength and its ability to cure in as little as a day create new construction possibilities that could save time and money, according to Matthew Needham, MDT’s materials testing supervisor. ]

The super concrete can be used to join together pre-fabricated panels of regular concrete to form the driving surface of bridges, reducing construction time and maintenance costs in the long run.

“One little square inch of this concrete will carry about 20,000 pounds,” Berry says, adding that the material gets its strength from fine particles of silica fume and fly ash. The particles fill in tiny voids around the larger particles in the concrete, creating a dense mixture. Polymers added to the mixture allow it to flow with less added water, and needle-like filaments of steel bond the product together once it has cured.

“There are a handful of states that are looking into making this stuff themselves,” he added. “We’re up in front.”

Riley Scherr, a senior who is majoring in civil engineering, will continue testing the strength of the concrete samples for up to a year after they are poured. He bathes samples in water and de-icing solution, and then freezes and thaws them hundreds of times to simulate the normal weather wear and tear on the roads.

Civil engineering master’s student Camylle Wood is working on the next phase of the project, which is to develop a way to scale make large quantities of the concrete for construction projects.