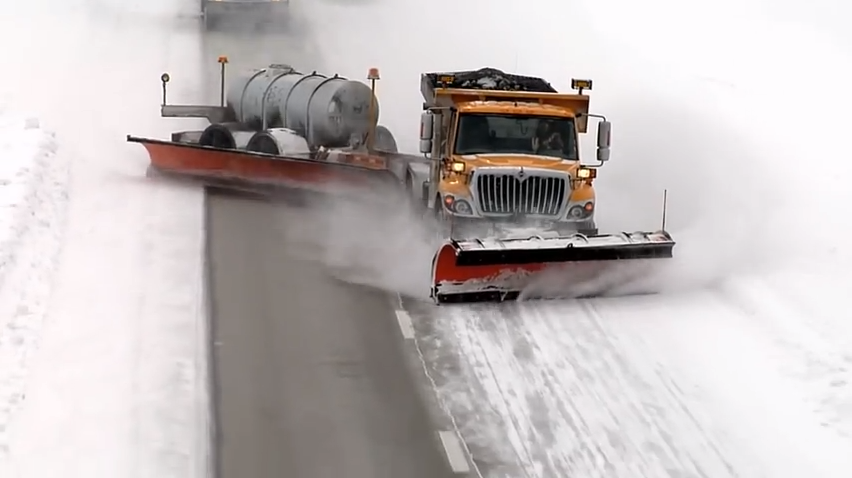 The plows — a tractor plow followed by a massive tow plow — gained good roadway coverage with just one pass.

But the quick and efficient method, used by the Missouri Department of Transportation (MoDOT) Southeast District, wouldn’t be available if it weren’t for one Kansas City man.

Bob Lannert started working with MoDOT in the late 1990s, around the time he came up with the idea to reduce the number of snow plows in use, reports NPR station KCUR.

“The thinking was, lets double the production of an operator, plow at least twice as wide so that we can get more done and release some of those trucks out of the gangs or the multiple truck gangs and go plow ramps and other things,” Lannert told the radio station.

“You could make a trailer of steering axles and steer it into the other lane and it looked like a jackknifed truck going down the road safely,” Lannert continued. “So, I want to be able to go through a 10 foot tollbooth and then unfold and clear 24 feet wide. That’s the goal.”

The result was the tow plow: a 25-foot-wide plow that stuck out lengthwise and angled behind a dump truck. It allows agencies to replace five trucks with just the one.

MoDOT began using the tow plow in 2005, and Lannert said the state now employs at least 80.

“The tow-plow started in Kansas City, Missouri and was duplicated in St. Louis and rural interstates and Missouri has 80-some on the road now, the most of any state in the nation,” Lannert said.

KCUR notes that Lanner has retired from agency work and now oversees private production of the plows and teaches owners how to use them. He continues to look for new ways to improve snow removal.

Check out the video to see the tow plow in action.