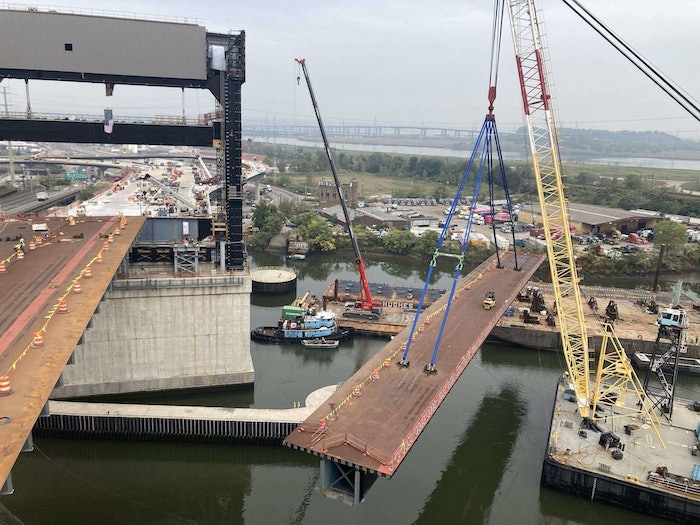 One of the three orthotropic deck sections for the new Wittpenn Bridge's vertical lift span is lifted into place.
NJDOT

A new vertical-lift bridge across the Hackensack River represents the first use of a lightweight steel “orthotropic” bridge deck for the state of New Jersey.

The orthotropic deck will serve as the vertical-lift span for the new Wittpenn Bridge between Jersey City and Kearny. The three-deck, 350-foot span was fabricated and assembled by Vigor LLC in 2017 in Oregon and then shipped over a month in five pieces through the Panama Canal to New Jersey.

The three deck sections rested upon barges in the river since their arrival in 2017. Three years later after project delays, they were finally installed in late September 2020. Each of the three decks was lifted a day at a time into place, according to Steve Shapiro, New Jersey Department of Transportation deputy director of communications. Two large end girders, also shipped on the barge from Oregon, were then installed. 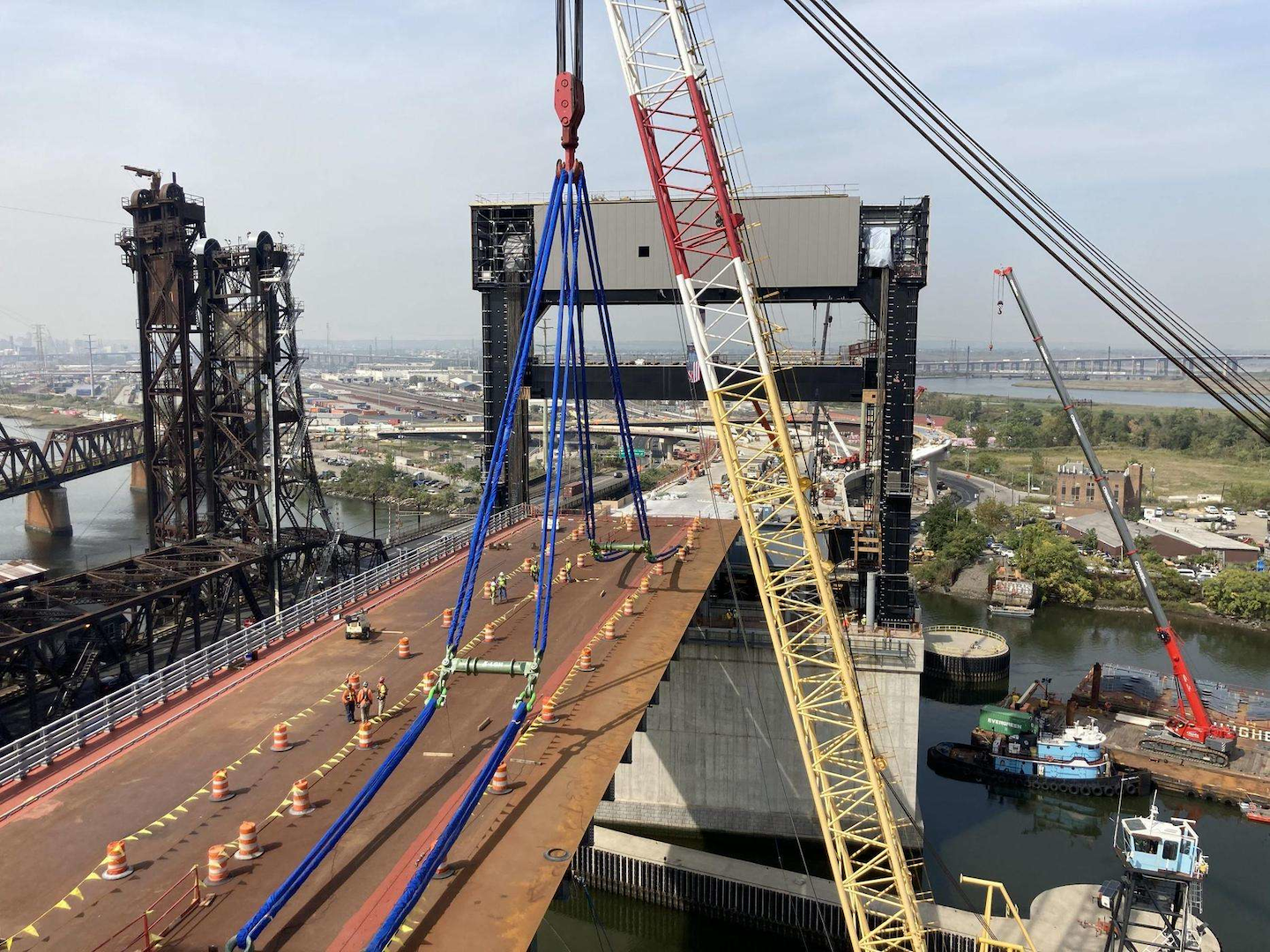 The new bridge is slated for opening in spring after the lift span is tested and railings and sidewalks are installed, Shapiro said. After that, work will continue on building a new ramp to Newark Avenue and improvements to the Fish House Road interchange.

The existing 90-year-old lift bridge on Route 7 will be demolished after the new one is completed.

The lift span of the new Wittpenn Bridge will stand 70 feet above the highwater mark in closed position, which is twice as high as the current span when closed. It will have a 135-foot vertical clearance – same as the current bridge – when the lift span is raised for ships to travel underneath. The higher closed clearance height means the lift will be raised less often than on the current bridge. The new bridge will have four lanes, an auxiliary lane, two shoulders, a sidewalk and a median.

The DOT said it chose the orthotropic deck design because its lighter weight will make the lift bridge more efficient. NJDOT cites such other benefits as less maintenance, corrosion resistance and enabling longer span sections to provide a better riding surface due to fewer connecting sections. Because it is prefabricated, the deck could also be built quicker and subject to strict quality control, NJDOT says. 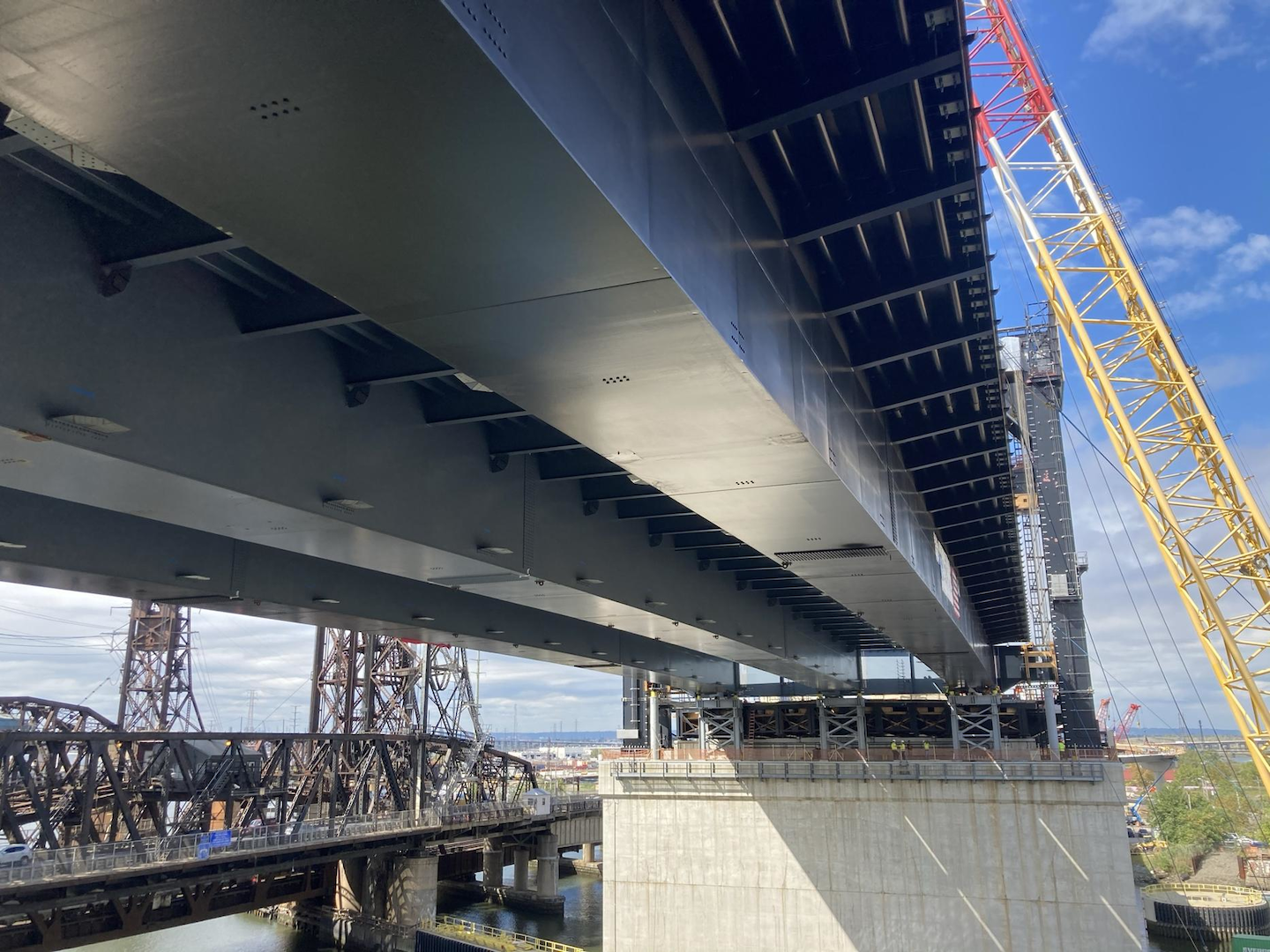 The new Wittpenn Bridge's orthotropic deck consists of longitudinal ribs and transverse floor beams under a thin steel plate that is covered by a wearing surface.NJDOT

The design consists of a thin steel deck plate overtop longitudinal ribs and transverse crossbeams. A wearing surface is applied over the plate during fabrication. The surface is designed to provide skid resistance, corrosion protection to the deck plate, level out deck irregularities and increase deck life with reduced stress on the steel plate, according to a Federal Highway Administration study. The superstructure is all steel, which should also increase service life and reduce maintenance, the study says.

The DOT says the cost of the deck was higher than for a concrete design, but the agency expects to recoup those costs from lower maintenance demands. Orthotropic decks have an expected life of up to 100 years.

Orthotropic bridge decks are more commonly found in Europe, Asia and South America, but there are about 100 in the United States, according to the FHWA study. They include replacement decks for the Golden Gate Bridge, Bronx-Whitestone Bridge in New York and the Takoma Narrows Bridge in Washington.

The orthotropic bridge deck design was developed in Germany in the 1930s, according to the FHWA study. An earlier U.S. design was called a “‘battle deck’ because it was considered to be as strong as a battleship,” the study says. The orthotropic name combines the terms “orthogonal” for the system of longitudinal ribs and transverse floor beams and “anisotropic” because of the different stiffness characteristics in the longitudinal and transverse direction. 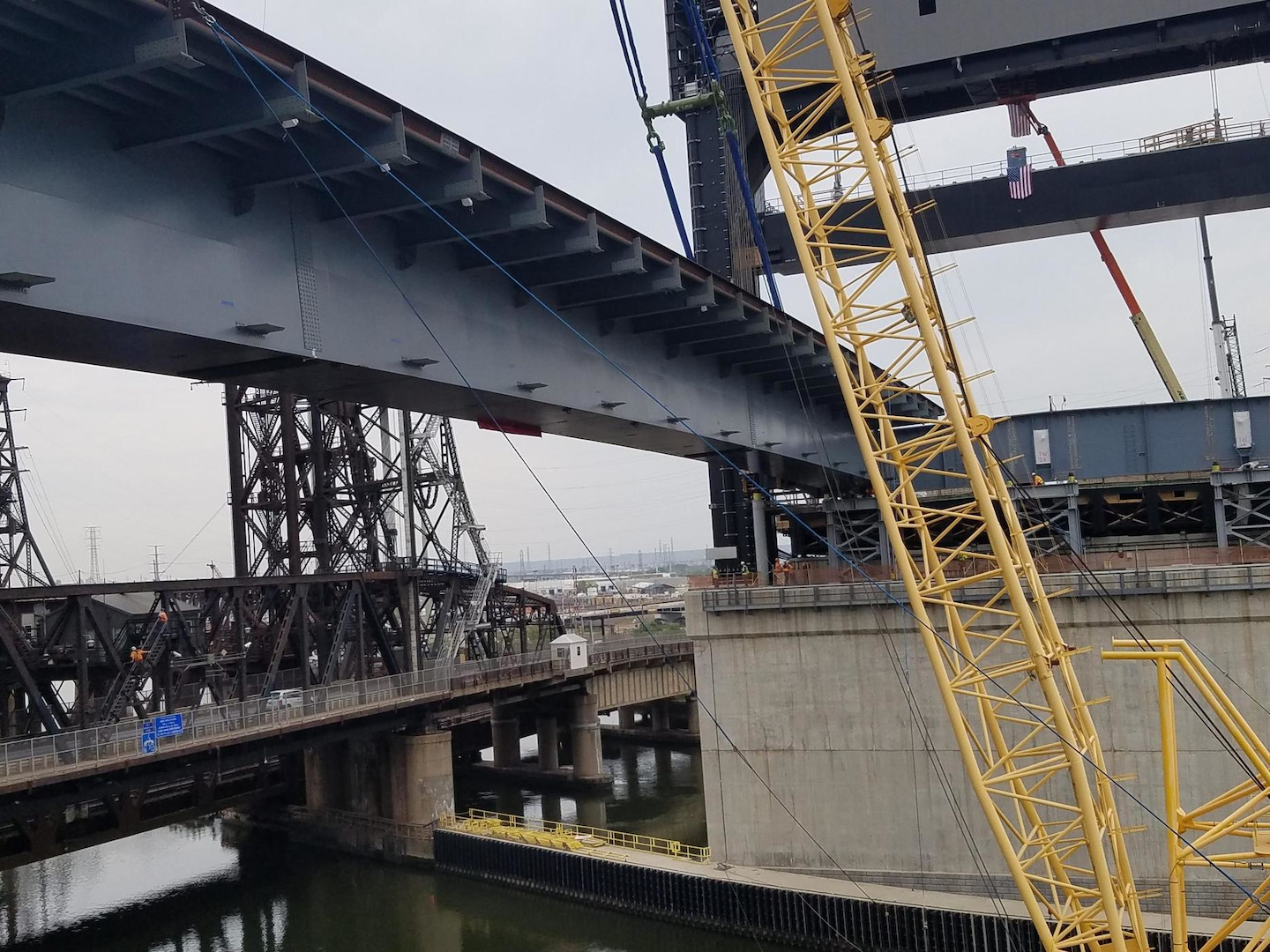