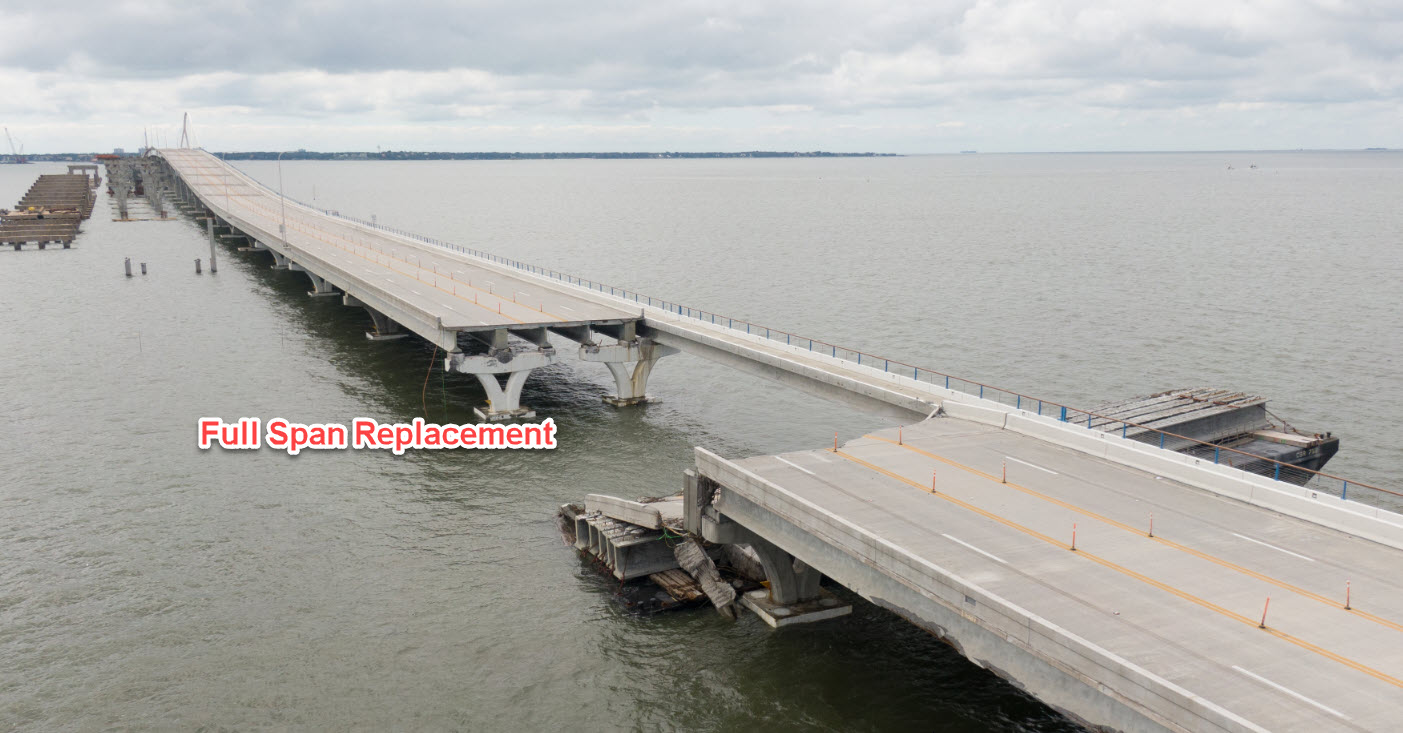 This span on the Pensacola Bay Bridge was damaged by a barge during Hurricane Sally. Photo credit: Florida DOT

Damage during Hurricane Sally to the new Pensacola Bay Bridge will keep the crossing closed for “an extended period of time,” says the Florida Department of Transportation.

The bridge between Pensacola and Gulf Breeze, Florida, known locally as the Three Mile Bridge, was struck by multiple construction barges that broke loose during the storm September 16.

FDOT reports September 23 that at least four bridge piers rotated from the impact and caused beam bearings to shift. “Beam bearings that shift too much can result in an uneven level of stress on the span,” the agency says.

FDOT also found cracked pilings in at least one of the piers. It says it is assessing the other piers for cracks and will determine a repair plan. The agency’s team of engineers has not found any damage to the arch section of the bridge deck. The bridge’s designer has been directed to begin design work for the permanent repairs. 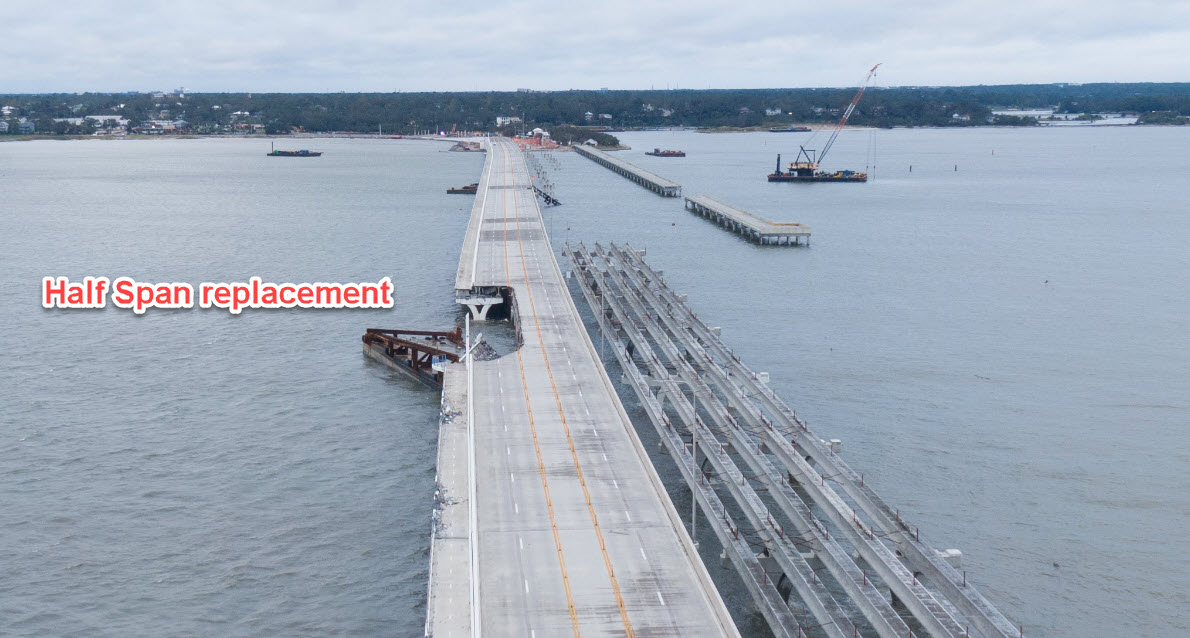 Efforts to assess bridge damage had been hindered by weather conditions and barges still at the bridge. FDOT says bridge inspections can take up to three weeks in favorable conditions. Repairs and reconstruction will need to occur before the bridge can reopen. FDOT says it does not have a time frame yet on when that will occur and won’t have one until after the assessment is completed.

The barges were being used by Skanska to build a new westbound Pensacola Bay Bridge. Last year, Skanska completed construction on the eastbound bridge, which was struck by the barges. The former bridge, which had deteriorated due to age, was demolished after the new eastbound bridge opened. Skanska, which won the contract for the $430 million project, has been sending out a community outreach team and insurance claims specialists to those affected by any of the barges that broke loose, FDOT says. 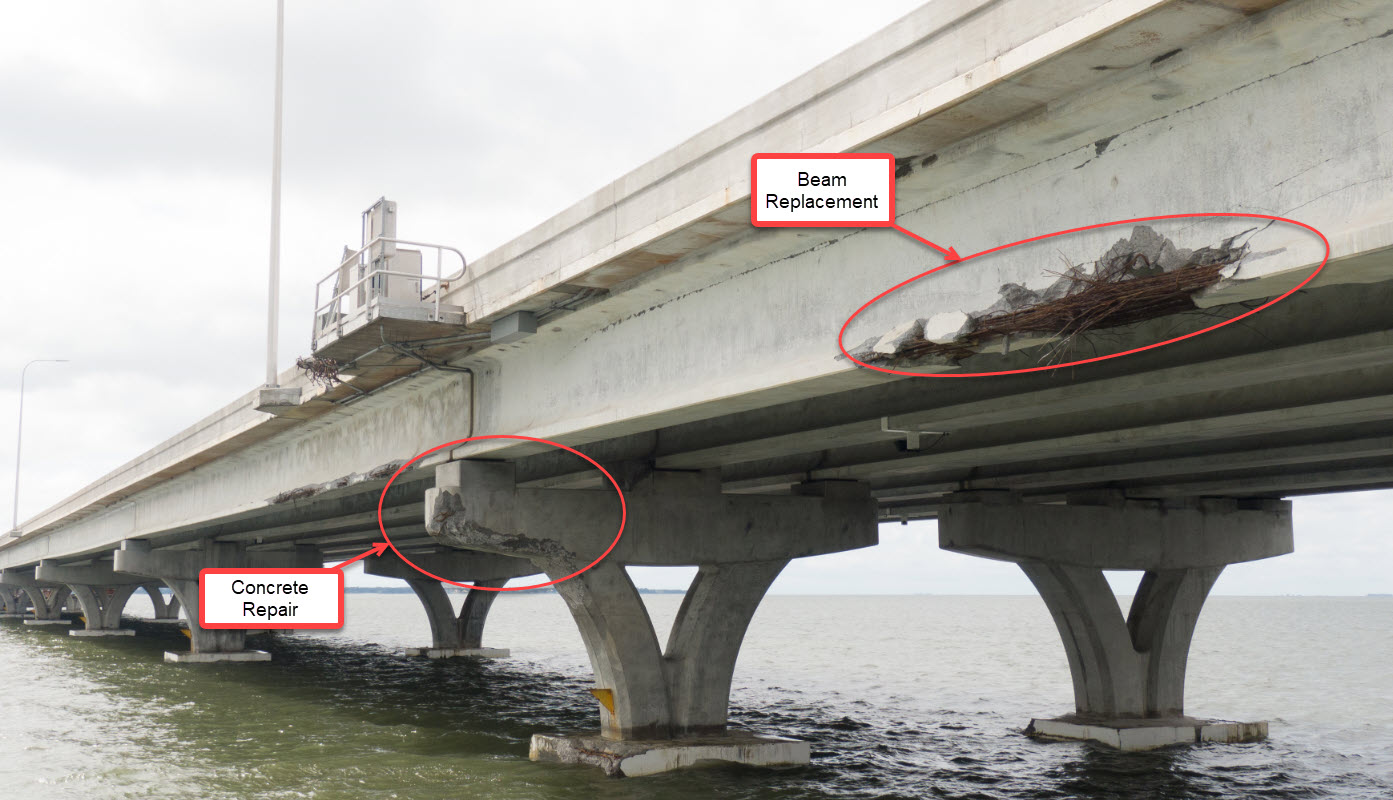 Barge damage to the Pensacola Bay Bridge. Photo credit: Florida DOT
Get the business tips, industry insights and trending news every contractor needs to know in the Equipment World newsletter.
Sign Up
Read Next