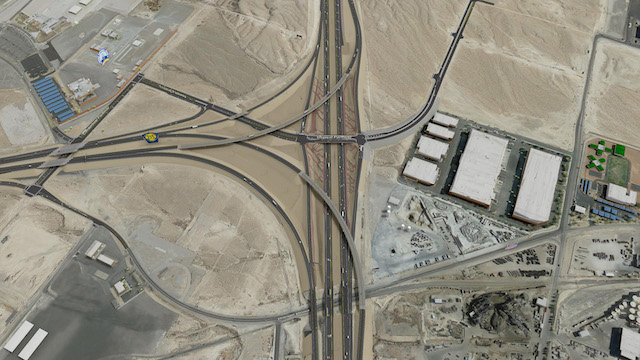 A rendering of the future I-15/ 215 Beltway interchange in North Las Vegas. Credit: Nevada DOT

Fisher Sand & Gravel has won the $99 million contract to build a new interchange at Interstate 15 and the 215 Beltway in North Las Vegas.

The Nevada Department of Transportation project will involve building ramps, flyovers and street connections to improve traffic and safety.

“The project entails building two massive cast-in-place concrete dual lane flyovers, among other structures, including a 51-foot-tall, 1,800-foot-long east-to-north connection that will be the equivalent of five football fields laid end-to-end,” NDOT says. “The northbound I-15 to westbound 215 flyover, meanwhile, will be longer than the Eiffel Tower laid on its side. The structures sit atop a network of drilled pilings that reinforce the subsurface, with the largest measuring 10-foot in diameter and 104-foot in depth.”

Other features of the project:

According to the NDOT, the interchange averages 34,000 vehicles a day. That traffic is predicted to grow by 72 percent over the next two decades. The project is expected to be completed in late 2022.

Atkins is the project designer. Lage Design is the landscape architect.