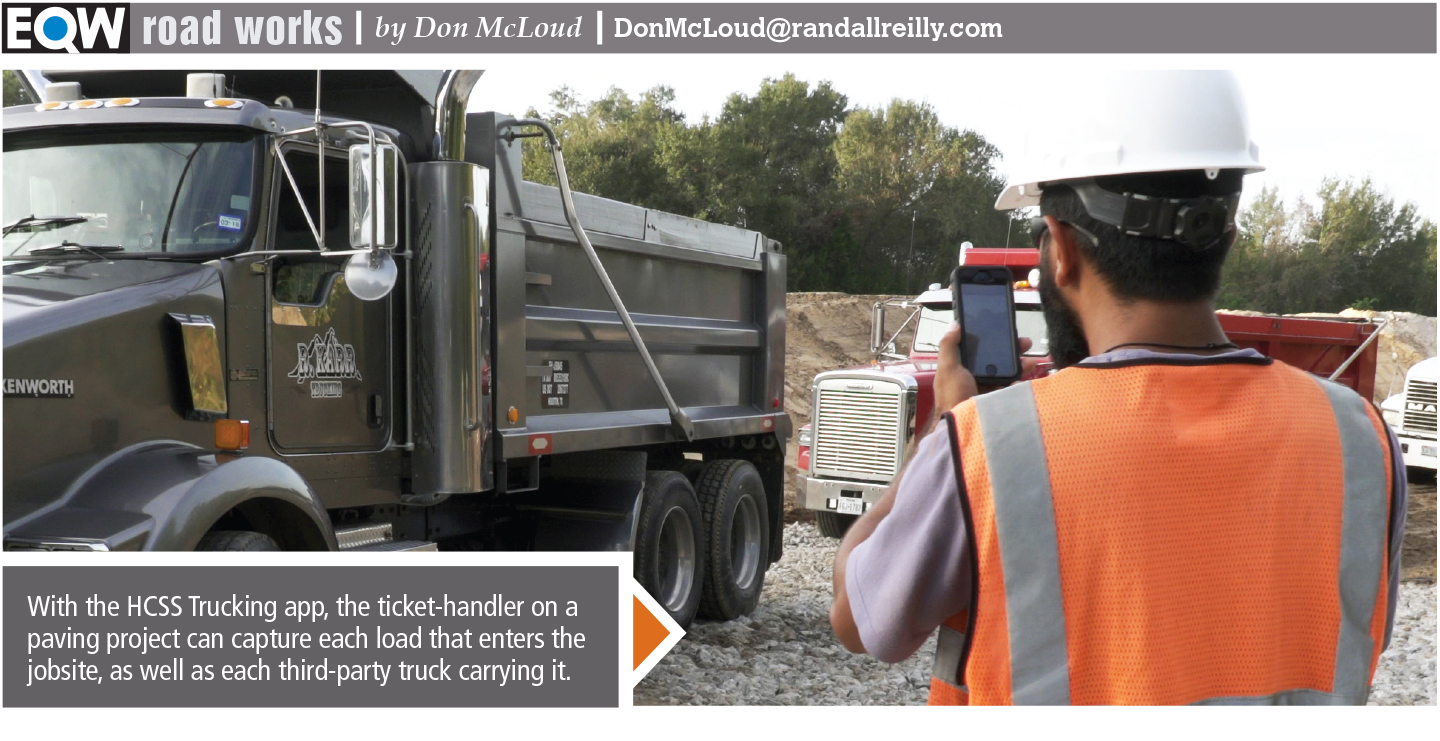 The primary focus: get asphalt and concrete delivered to the jobsite in a way that keeps the paving crew rolling without costly interruptions.

“On a 2,000-ton day, you’ve probably stopped the paver a minimum of five times waiting on a truck,” says Dann Rawls with Caterpillar. “If you can eliminate two of those stops, you’ve cut the cost down quite a bit.”

Some of the new logistics systems are as simple as downloading an app. Others provide sensors on trucks and pavers to give real-time information such as hot mix asphalt temperature and how much water has been added to the cement truck’s mix. Some systems can even find haulers for contractors, similar to ordering an Uber or Lyft ride.

Departments of transportation around the country are also studying the possibility of switching from paper to electronic load and unload tickets. That could also make life easier for contractors stuck with filling out, filing and storing paper tickets.

“We have one customer where they do more than 100,000 paper tickets a month,” says Pace Davis, CEO of TruckIT. “They have warehouses full of paper tickets.”

Such inefficiency is also seen between the material plants and the jobsites. Sometimes a large batch of trucks will unexpectedly show up at once, or worse, trucks don’t show up at all. Haulers waiting at the jobsite and the plant cost additional money. And gaps in deliveries cause costly delays and can affect pavement quality. 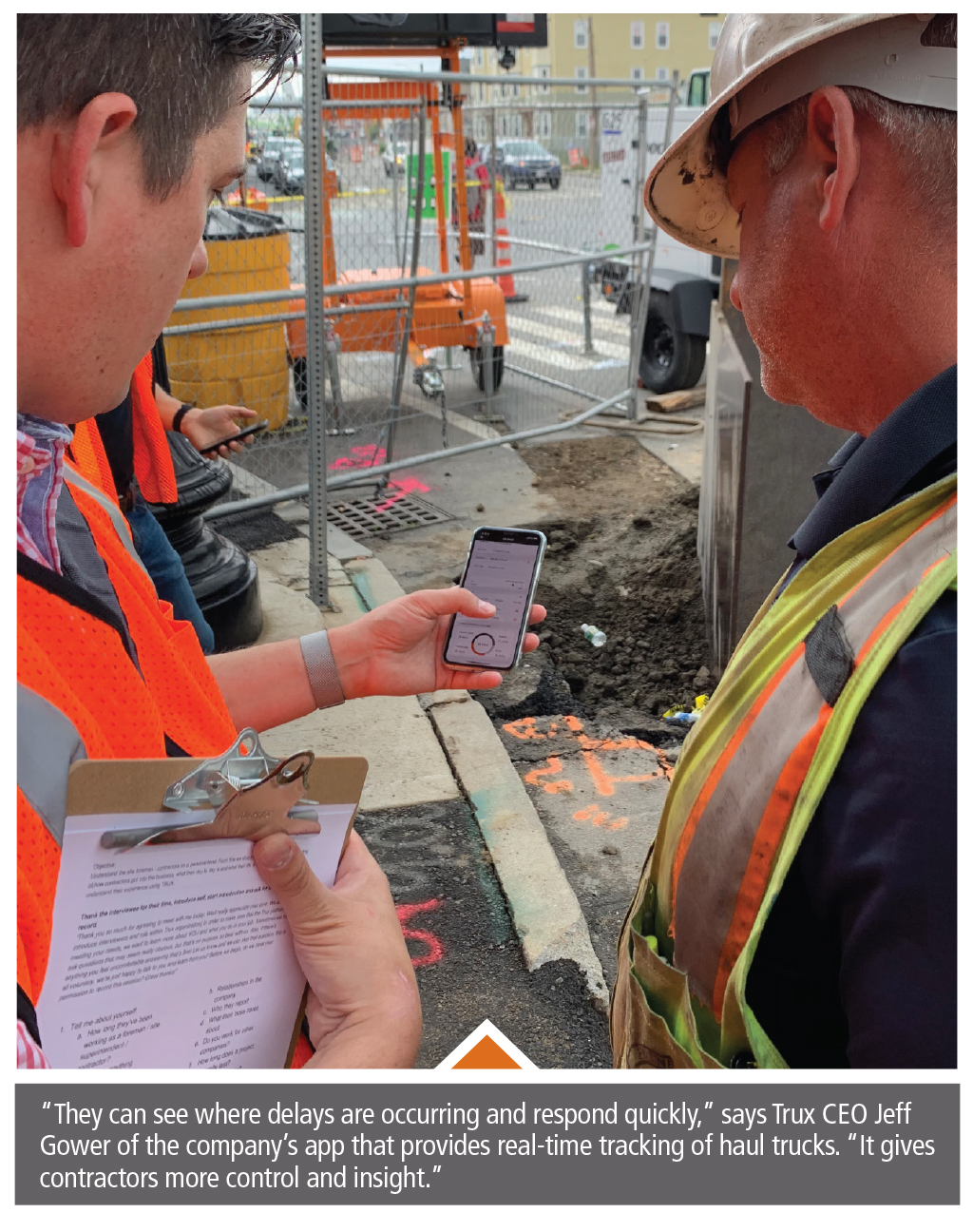 “Quality also equals money,” says Jan Mennink, Topcon senior product manager for paving. “If you don’t have to stop the paver, it’s less likely you will have bumps. If you have fewer bumps, you have fewer penalties. For smoothness of the surface, you can get bonus money. So it’s a mix of cost-savings and moneymaking.”

Now, thanks to the cloud and mobile technology, a variety of new products have been developed to reduce such headaches for contractors and give them a better view of their paving logistics so they can cut costs and boost profits. Provider companies predict rapid growth for their products.

“We think the construction world before long is going to be completely digitized like other industries,” says Jeffery Reeves, Trelar vice president of business development.

Here’s a look at some of the paving logistics products currently available or being developed.

Caterpillar’s new eRoutes 3.0 system tracks each segment of the hauling, loading and unloading process so contractors can see where the asphalt trucks are and when they will arrive, Rawls says.

The system includes a truck tracking device about the size of a deck of cards that automatically captures ticket data at the plant. A mobile geofence around the paver allows collection of details about the unloading process, including truck wait time.

Through an app, workers on the jobsite can make adjustments as needed to balance material supply and production. The system also archives data, so contractors can measure driver performance and other information to improve efficiency and productivity.

ERoutes requires a yearly subscription. It is being distributed through Sitech, Trimble’s technology distribution network. (Trimble is Cat’s technology partner.) Contractors interested in the system can reach out to their local Sitech or Cat dealer, Rawls says.

Cemen Tech created its cloud-based Accu-Pour system for monitoring and reporting on its volumetric concrete mixers but has recently expanded the system to work with competitors’ machines.

Accu-Pour consists of two components, AP Office and AP Mobile, to let contractors know where their truck fleet is at any time and if any adjustments need to be made.

AP Office software is used for scheduling, dispatching and fleet management. Through telematics, the software tracks the status and location of each mixer in real time and documents key production statistics.

AP Mobile allows users to wirelessly send and receive production data between AP Office and the mixer by mobile app. Users can view mixing parameters in real time. And after the pour is completed, the final job data synchs automatically with AP Office.

AP Office allows for performance analysis, and information can be exported to the company’s accounting software. The system can also filter data based on mixer, operator, city or zip code.

Coretex launched its next-generation Coretex 360 system for ready-mix concrete operations about a year ago in North America. Currently, the system is geared toward ready-mix fleet companies, but company co-founder Dean Marris says plans are underway to bring the service to paving contractors.

With truck sensors, Coretex 360 provides a detailed view of ready-mix operations, from the concrete mixer’s comings and goings and every step in between, including drum rotation and water added, the company says.

Marris says the system tracks in real time how far the trucks are from the jobsite and plant, the distance between trucks, their wait times at the plant and jobsite, and the pouring status.

The Coretex 360 setup includes a black box sensor for trucks to receive job tickets. That data is also sent to the hauler’s tablet. The system’s mapping software directs drivers to the job and lets them know where the closest batch plant is for the next assignment.

The HCSS Trucking app is designed to eliminate paper truck tickets and remove fraud by using smartphones and tablets in the field, HCSS says.

The person in charge of handling tickets on a paving project can capture each load that enters the jobsite, as well as each third-party truck carrying it. The system monitors cycle times and spots any reporting errors by brokers, the company says. A contractor’s drivers can see daily schedules, clock in and out of jobsites, and log pickups and deliveries.

Bluetooth devices are used to automatically identify each truck that enters and leaves the jobsite and the material it is carrying. A new truck can be added to the system within seconds, the company says.

Topcon’s new Pavelink provides a communication link between the asphalt plant, the hauler and the paving crew.

“It informs all stakeholders of what’s going on so they can make the right decisions,” says Mennink. “Both the tickets and the trucks are tracked through the end of the project.”

For the contractor, the system lets them know exactly where the trucks are and when they will arrive.

Topcon Pavelink is an app-based system. Optional sensors are available for trucks and pavers, which allow for more detailed planning such as calculating how many truckloads will be needed for the paving area and the paver travel distance. The system will also determine average load and unload times, as well as wait times.

For pavers, Topcon provides an Android tablet with the Pavelink software and app already downloaded on it. The optional paver sensors also measure asphalt temperature from the screed and on the paving surface, as well as show how wide the screed extension is extended.

Startup company Trelar went live with its truck hauling and paving logistics app in July in Seattle, California’s Central Valley, the Phoenix area and in Florida. Reeves says the goal is to be available nationwide within a year.

The app- and cloud-based system allows contractors to hire haulers on a digital marketplace. They can also track their trucks and third-party trucks in real time between asphalt plant and jobsite. The contractor can go to his favorite truckers on the app or broadcast jobs over the marketplace.

Once a job is accepted, the driver receives all the job details by mobile app. At the plant, the driver clicks the phone app to start the job. GPS mapping software directs the hauler to the site. After dumping the load, the driver hits the app again to complete the job. The driver also uploads the ticket image, where it remains in the cloud for all stakeholders to see.

Trelar charges the contractor a transaction fee, pays the driver through a PayPal-type system and later collects from the contractor’s accounts-payable software.

TruckIT, an Atlanta-based company that started in 2014, went live with its truck marketplace and logistic app- and cloud-based system about a year and a half ago.

The system provides a digital load and unload ticketing process in which drivers input the load weight and ticket number and confirm the drop-off and pickup through the app. The company also has an AirTicket system in eight locations in which drivers don’t have to input information at the scale house; the ticket is automatically uploaded, says Davis.

TruckIT operates in Georgia, Florida and South Carolina, as well as parts of Alabama, according to Davis, and has plans to spread throughout the Southeast.

Trux formed in 2015 and enables material producers, such as asphalt plants, and contractors to request haulers, and it allows drivers to select the jobs they want, says CEO Jeff Gower.

For contractors with their own fleets, Trux staff will train dispatchers and upload driver and truck information into the system. Contractors then can schedule hauling jobs. If they don’t have enough trucks to complete a project, they can go to the Trux marketplace to post jobs for haulers. If contractors have more drivers than they need, they can also release them to the Trux marketplace to accept hauling jobs.

Contractors can track hauling jobs in real time. The system will also suggest whether more or fewer trucks are needed and show contractors whether they are achieving expected progress. If a contractor falls behind or gets ahead of schedule, trucks can be redirected accordingly.

Trux operates in 14 states and 20 metro areas and has 10,000 drivers in its network, Gower says. It expects to expand to 10 more states and 25 more metros by the end of the year.