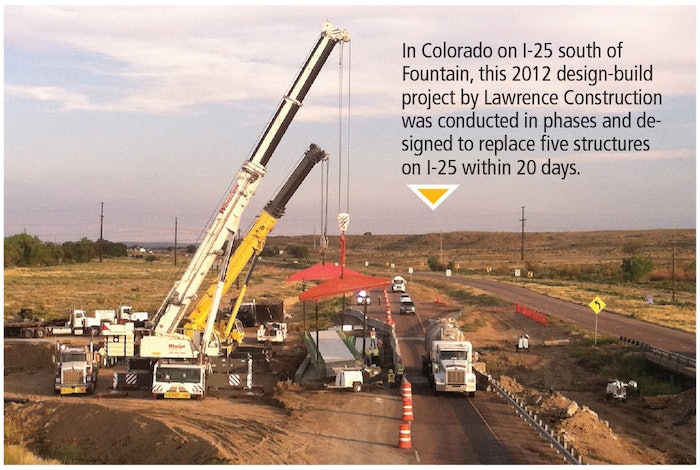 The use of Accelerated Bridge Construction (ABC) is growing, with prefabricated elements and systems reducing or eliminating the onsite construction time needed to build a similar structure using conventional methods.

ABC relies on innovative planning, design, materials and construction methods to reduce both onsite bridge construction and reconstruction time. That’s important to highway contractors who face intense pressure to avoid prolonged closures, for which the public has little tolerance.

Coast to coast, contractors are using ABC practices to slash construction time from weeks to days, and in some cases, from days to just hours. That in turn helps protect the public and workers in construction zones, say contractors and transportation departments.

Various technologies can be used to incorporate ABC into projects. The use of prefabricated bridge elements and systems, bridge slides and bridge moves with self-propelled modular transporters all support the goals of ABC – which include improved safety and quality and minimized traffic impact.

Safety spurs use of ABC

Lawrence Construction of Littleton, Colorado, first used ABC methods in 2002 when it received a Colorado DOT contract for the Mitchell Gulch project on SH86 between Castle Rock and Franktown.

But Rick Lawrence, Lawrence Construction president, was concerned about the safety of his crews when looking at ways to do the job. The highway approach to the west of the project site had a steep downward grade. The detour around the bridge site also had a nearby curve.

Lawrence was aware of a fatal accident that had occurred with a subcontractor during a different bridge project that also involved an incline.

So Lawrence, working with his daughter, Anne Lawrence, who is vice president of Lawrence Construction, teamed with local design firm Wilson & Company to submit a value engineering change proposal. The proposal involved building a completely prefabricated single-span bridge that could be moved into place over one weekend – a move that limited their crew’s onsite exposure time and could be completed without a price increase.

This approach allowed crews to move the bridge into place in just 47 hours. Demolition of the old bridge began at 7:30 p.m. on a Friday, and the new bridge opened to traffic at 5 p.m. the following Sunday, the Lawrences say.

To do that, piles were driven in advance outside the old bridge. The bridge parapet was precast into the outside slab girders. The bridge has side-by-side precast slab girders welded onto precast abutments and wingwalls welded to driven-steel H piles.

The Mitchell Gulch reconstruction was described as a “success story” by the Federal Highway Administration (FHWA) in a cost study of prefabricated bridge elements and systems used in ABC.

Lawrence Construction has since gone on to help pioneer the use of ABC construction across the nation, teaching other contractors how to implement it into projects.

“With the use of prefabricated elements, it’s important that the bridge be 100-percent precast,” Rick Lawrence says. “You take away the cure time of the concrete on the project.”

Since his company’s first ABC project nearly 17 years ago, “we’ve used it on quite a few projects,” Lawrence says. “It’s highly successful.”

Accelerated Bridge Construction can help transportation departments save money in an era of tight funding – and when so many bridges are deficient.

According to the FHWA, about one in four of the nation’s 600,000 bridges require rehabilitation, repair or replacement.

Yet at the same time, onsite construction can significantly impact the public’s mobility and safety. In many projects, the direct and indirect costs of traffic detours from the loss of a bridge during construction can exceed the actual cost of the structure itself, the federal agency says.

For example, full-lane closures in large urban centers or in areas of heavy traffic can wreak significant economic impact – one of the key factors prompting DOTs and other entities to turn to methods that shorten road closures.

In Utah, the Department of Transportation has widely implemented ABC – so far on more than 200 bridges. The use of ABC is now common practice throughout the state, and Utah is seen as a national leader for ABC.

Utah uses ABC to improve safety and minimize the impact to the public by reducing the time needed for traffic detours and closures, says UDOT’s chief structural engineer, Carmen Swanwick.

“Those are really the major reasons we do it,” says Swanwick, who speaks nationally on the topic, including at Florida International University’s Accelerated Bridge Construction University Transportation Center (ABC-UTC).

In Utah, previous ABC design documents and supporting drawings have been incorporated into the DOT’s Structures Design and Detailing Manual. Designers, fabricators and contractors are on board with the use of ABC, she says.

Components of ABC bridges are prefabricated in controlled environments that lead to improved material quality and workmanship relative to field-constructed bridges. Prefabricated components may make up most of an ABC bridge, but there’s a caveat: field-cast closure joints connecting prefabricated elements may not have the same durability due to weather and other site constraints during placement. Because of that, it is crucial to understand the materials being specified.

Similarly, ABC bridge span systems slid into place or positioned with self-propelled modular transporters may experience dynamic effects during the moves or may be subjected to nontraditional loads that site-constructed bridges do not experience. These effects are considered in the design of the bridge. Bridge moves also call for detailed plans, along with monitoring and contingency plans.

In the beginning, the Utah DOT visited New York, Florida and Louisiana to learn about implementing ABC. The department took internal staff, contractors, fabricators and consultants on the tours.

Utah moved on to pilot projects, then to a program of projects and now has “probably the most robust program for ABC in the country,” she says.

Contractors in Utah are savvy about ABC, she says. If they have questions, the department will provide guidance, but a lot of the time, the contractors have come up with even better ideas than first proposed by project designers, says Swanwick.

She adds that the contractors compete among themselves on ABC projects, saying things such as, “Hey, I got that road open in 12 hours – what did you do?” as they discuss projects.

“We monitor the ABC program and have several lessons-learned documents which can be found on the UDOT website. Some lessons-learned documents are project specific, and others are on the overall ABC program,” Swanwick says. “There are design details we used in the very beginning of the program that didn’t work very well, and we won’t use them again.”

ABC is continually evolving, she says, especially with advancing technology and materials.

Most states are using ABC in some form. The American Association of State Highway and Transportation Officials released the AASHTO LRFD Guide Specifications for Accelerated Bridge Construction in late 2018. The guide details the recommended design and construction specifications for ABC-focused technologies. It provides information that helps not only states but also consultants and contractors to advance ABC, Swanwick says.

“ABC is embraced with a high level of confidence within the contracting community,” he says.

He agrees that ABC makes optimum use of government transportation funds – as well as enhances the safety of construction workers, inspectors and subcontractors.

Noting how ABC lessens the impact to users, Wells points to one of  his company’s major projects.

Granite recently completed a lateral slide of a 124-foot box section weighing more than 3 million pounds on a congested 10600 South interchange in Sandy, Utah, adjacent to one of the busiest shopping malls in Utah.

This work was accomplished in a 16-day closure, which included a seven-day cure period for Portland Cement concrete pavement, Wells says.

And all this work was performed in a contract that involved an incentive/disincentive clause amounting to $15,000 a day, the contractor notes.

In his public presentations, including at Florida International University ABC-UTC, Wells gives a contractor’s perspective when pointing to these benefits of using ABC practices:

• Ability to earn more revenue in shorter period of time

Wells is among those who have seen firsthand ABC’s advancement.

He says the Utah Department of Transportation, designers, fabricators and contractors have developed highly collaborative relationships while working in unison on ABC projects.

That’s the kind of progress taking hold in many other states, too.

“I think the biggest thing to go with ABC construction is it helps promote innovation and growth within our industry,” says Anne Lawrence, adding that new visibility with the method will enable contractors to make their industry even better.

ABC allowed Lawrence Construction to implement some “really cool precast ideas that helped accelerate the projects and actually make the structures more sound,” Lawrence says. “Beyond just safety, innovation is one of the biggest benefits.”