The American Society of Civil Engineers gives the overall bridge conditions in the U.S. a C+ grade in its 2017 Infrastructure Report Card.

“While the number of bridges that are in such poor condition as to be considered structurally deficient is decreasing, the average age of America’s bridges keeps going up and many of the nation’s bridges are approaching the end of their design life,” the association says in its report. “The most recent estimate puts the nation’s backlog of bridge rehabilitation needs at $123 billion.”

ASCE says the U.S. has 614,387 bridges with nearly 40 percent being 50 years or older, and 9.1 percent rated as structurally deficient last year.

The association reviewed U.S. bridges in three areas, including condition and capacity, funding and future need and innovation. 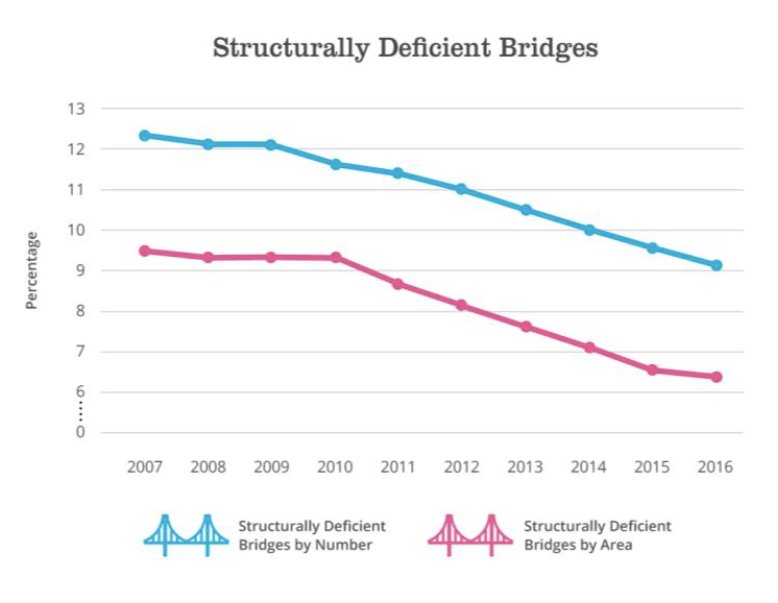 ASCE reports that there has been a nationwide effort to reduce the number of structurally deficient bridges in the U.S. over the past 10 years, with the percentage rated in this condition dropping from 12.3 percent of the whole to 9.1 percent. By bridge deck area, this figure has dropped from 9.5 percent in 2007 to 6.3 percent in 2016.

However, the association points out there were 188 million trips across structurally deficient bridges each day last year.

Thirty nine percent of all bridges in the Federal Highway Administration’s National Bridge Inventory are more than 50 years old, with 15 percent being between 40 and 49 years old. The average is 43 years old.

Functionally obsolete bridges made up 13.6 percent of the bridges in the U.S. last year, which can act as “choke points” in traffic. One in 10 bridges had weight restrictions placed on them in 2016. Such bridges “dramatically increase driving time for larger vehicles such as school buses, ambulances and delivery trucks,” ASCE reports. 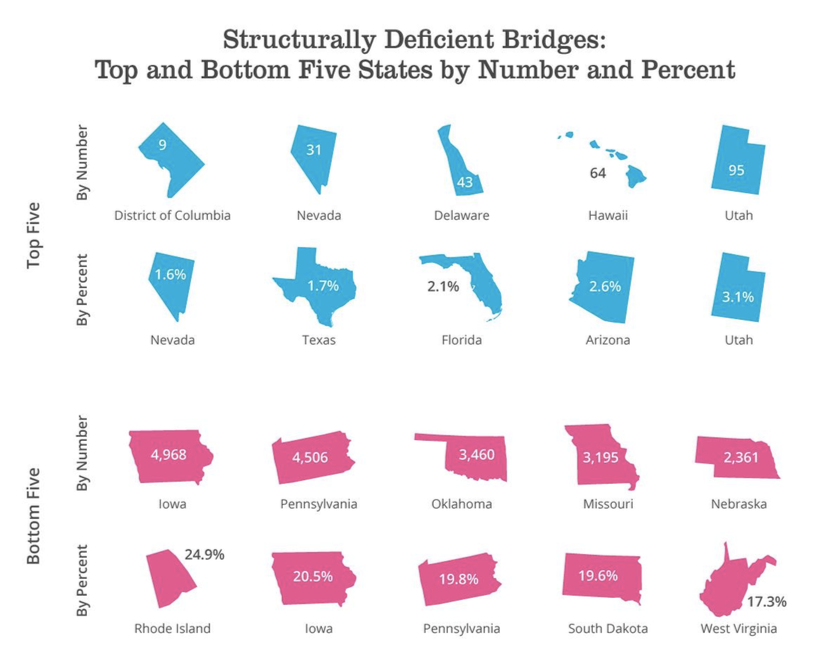 The association says bridges have become a priority in funding as of late, with the federal government estimating $17.5 billion was spent on capital projects in 2012, with $11.5 at the state and local level and $6 billion at the federal level. In 2006, the total figure was only $11.5 billion spent at all levels.

These increases were helped by the American Recovery and Reinvestment Act, which allowed a peak of $18 billion spent in 2010. Despite this, ASCE says, federal estimates show there is a backlog of $123 billion worth of rehabilitation work needed.

The FAST Act, passed in 2015, is seen as a good sign for future funding, but “implementation of the increased funding levels included in the FAST Act has been delayed due to Congress’ inability to pass a new spending bill,” the association says.

ASCE reports that new technologies and materials have aided engineers to “build bridges better and faster while also improving maintenance for longer bridge life.” These include sensors embedded into bridges that give feedback on structural conditions, and ultra-high performance concrete, high performance steel and composites used to strengthen bridges. Accelerated bridge techniques, such as prefab bridge components, are also helping to reduce construction time to minimize traffic distruption.

♦  Increase funding from all levels of government to continue reducing the number of structurally deficient bridges, decrease the maintenance backlog, and address the large number of bridges that have passed or are approaching the end of their design life.

♦  Bridge owners should consider the costs across a bridge’s entire lifecycle to make smart design decisions and prioritize maintenance and rehabilitation.

♦  States should ensure their funding mechanisms (motor fuels taxes or other) are sufficient to fund needed investment in bridges.

♦  States and the federal government should consider long-term funding solutions for transportation infrastructure and potential alternatives to the motor fuel taxes, including further study and piloting of mileage-based user fees.

A summary of ASCE’s grade for U.S. roads is available here.