Using these processes, the existing pavement is milled, then mixed with a recycling agent, repaved and compacted. The working equipment can be lined up in sequence, hence the term “recycling train” or “equipment train.” As with full-depth reclamation, a reclaimer or recycler is referenced as single-machine paving. In both cases, the steps involve pulverizing/crushing, adding and mixing a recycling agent and paving.

In material savings, it is estimated these methods can reuse up to 85 percent of the pavement. Another advantage is that traffic can be put back on the pavement faster than in traditional paving.

But these methods are not for every roadway, as one limitation for both methods is traffic volume.

CIPR begins with milling from 2 to 6 inches of existing pavement. The milled material is then mixed with a recycling agent, either emulsified or foamed, and then repaved and compacted. Traffic can’t be allowed on this surface for a couple of hours and a top overlay is added as a final touch.

This cold method is still considered an application for moderate- to low-volume roadways that do not have major underlying structural issues, such as deep cracking, poor draining, pumping and saturated subgrade materials.

This method is recommended for roadways that instead are suffering from raveling, weathering, bleeding, corrugations, shoving, slippage, rutting, cracking and shallow potholes.

In a high traffic volume situations, CIPR roadways have been know to ravel, which is a problem since it is considered a fix for this fault.

Other situations in which CIPR isn’t necessarily recommended include pavements with rubberized hot mix asphalt, geosynthetic layers or with multiple utility access points.

And while it may seem antithetical, CIPR isn’t recommended during night construction or if the pavement and ambient temperatures are too low.

Despite these seemingly negative attributes, there have been some successes in using CIPR.

The Wisconsin Department of Transportation (WisDOT) says CIPR projects in 2016 showed an average cost savings of 17 percent per mile compared to mill and overlay work. The total savings the agency realized reached $1.47 million.

The agency says it was able to reuse approximately 93,450 tons of material on resurfacing 28.47 centerline miles. This would be enough material to fill more than 4,600 quad-axle dump trucks, WisDOT reports.

“With cold-in-place recycling, we’re reducing the cost to taxpayers while also cutting down on project time and the associated delays for drivers,” says Barry Paye, engineering chief in the Materials Management Section of WisDOT’s Bureau of Technical Services. “To put it in perspective, we would have had enough dump truck loads of material from the projects to stretch a line of dump trucks more than 22 miles. That’s important, because as those trucks stay parked, we save on fuel and create less wear and tear for our highways.”

Since 2012, the agency has used CIPR in seven different road projects across the state. It says the technique works best for roadways “where the pavement surface is worn and cracked but the subgrade below is still firm and in good shape.”

Other benefits WisDOT found in the technique include:

• Reduction in project time, which reduces delays and inconvenience to road users

• Reduction in the need to purchase and use new materials

• Reduction in cracking because of increased durability.

The first CIPR project the agency completed was Wisconsin 48 from Grantsburg to Frederick in Burnett/Polk counties. In repeated studies, WisDOT found cold-in-place recycling reduced cracking by 90 percent and has provided a 15 percent better pavement performance rating compared to conventional mill and overlay.

But, because the method requires an overlay on top, it can be perceived as an unfinished job while in process because of the appearance of the recycled roadway. Officials in Williamstown, Massachusetts, last summer experienced some backlash from residents during a CIPR project on Massachusetts Route 43 in the area. Before the overlay could be finished, residents began complaining about the quality of the paving job.

In this context, it would be recommended that municipalities and contractors work on a communications plan for informing local residents about the process and transitional appearance.

HIPR differs from its counterpart in that the existing pavement can be heated, scarified or milled to a maximum of about 2 inches deep. The material is remixed with a recycling agent or new hot mix, paved and compacted just as occurs with CIPR.

There are three main processes for HIPR: surface recycling, remixing and repaving. Surface recycling is the aforementioned heating process, which softens the roadway so it can be scarified; captured and, if required, mixed with an agent; then placed in a paver hopper and paved as a standard pavement.

Remixing is a similar process, except new aggregate, asphalt binder, a recycling agent or hot mix asphalt can be added with the recycled asphalt. This process is sometimes used to improve the quality of the existing material for durability or to crack resistance properties.

Repaving involves leaving the recycled material in place, with an overlay added on top. This is done with either one paver in a single pass for both layers or two machines with each dedicated to one layer.

Light truck traffic is the most an HIPR roadway can take and its designed for much of the same pavement problems that CIPR can fix. And limitations are similar as well, with the addition of previous layers of chip seals, heavy abundance of filled cracks and moderate alligator cracking. HIPR also doesn’t have the temperature limitations that CIPR has. 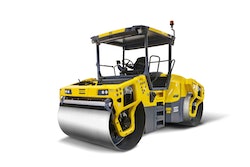 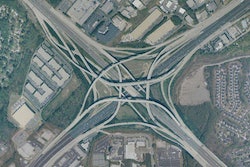 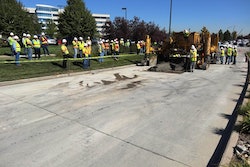