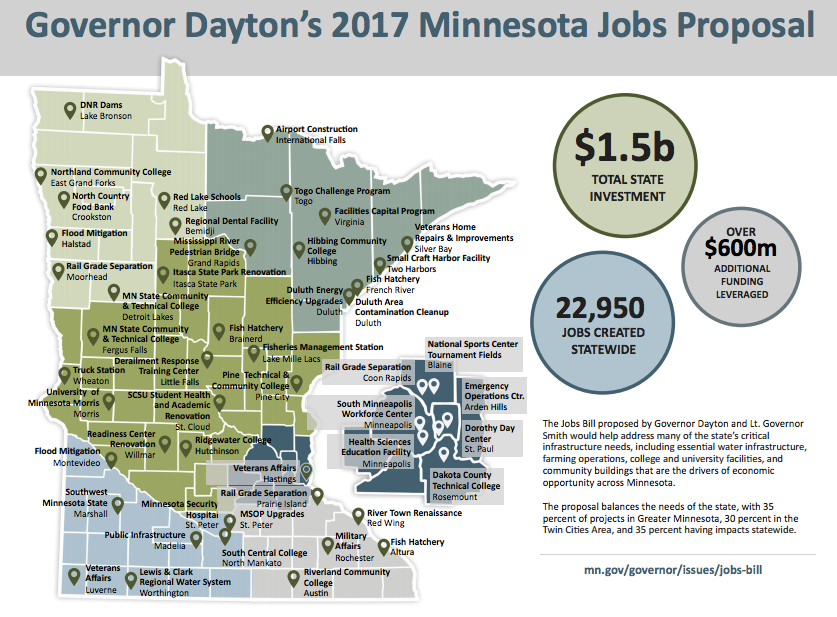 Minnesota Gov. Mark Dayton, along with Lt. Gov. Tina Smith, have introduced a $1.5 billion bonding bill for infrastructure projects across the state, claiming that the bill will create 22,950 jobs.

“My proposals would put thousands of Minnesotans to work throughout our state, increasing economic opportunity and strengthening local economies,” said Gov. Dayton. “This bill will help deliver clean, reliable water to Minnesota communities, ensure our higher education institutions have the facilities they need to train our workforce, and build community projects across our state. I urge the Legislature to pass this Jobs Bill quickly, to support our local economies and create good jobs across the state.”

Among the multiple aspects of the proposal, two stand out for bridges and roads.

The Local Road Improvement fund proposes $70 million “to help cities, counties or townships with local road projects that will reduce traffic crashes, deaths, injuries and property damage. The funding also could be used to help pay the local share of improving state highways.”

The Local Bridge Replacement Program also would receive $70 million “to fund the rehabilitation or replacement of local bridges across the state.” This aims to help local communities “shoulder the cost” of the estimated $460 million needed over the next five years to replace the roughly one in 10 locally maintained bridges (longer than 10 feet) that are structurally deficient or functionally obsolete.

“Our top priority is to expand opportunity through an economy that works for everyone, everywhere in Minnesota,” said Lt. Governor Tina Smith. “This bill will invest in classrooms for our students, affordable housing for more Minnesotans, and expanded, improved operations for Minnesota farmers. These community construction projects will strengthen our local economies and improve opportunities for all Minnesotans.”

Other features of the proposal include:

More details are available at mn.gov/governor/issues/jobs-bill.