More durable and longer bridge girders could spell cheaper construction costs among other benefits, and a few engineering researchers at the University of Alabama are trying to make that a reality.

According to a UA news release, researchers are testing longer, stronger giant concrete bridge girders in a lab at the University of Alabama. The testing is part of a two-year project between the Alabama Department of Transportation and the university’s civil, construction and environmental engineering department.

The goal is for the the engineering researchers to come up with a recommendation on how to design and produce concrete girders that can span up to 180 feet. That’s about 15 feet longer than the longest girders used in Alabama currently. And that 15 feet can mean a lot.

Longer and more durable concrete girders means there would be fewer support structures underneath the bridge, saving construction costs and time for the builder. But the benefits aren’t just about costs, the new longer girders would also mean fewer disruption to the environment over water and other natural habitats. And even in the cities, traffic and businesses would be less affected by overhead bridges.

“You want to improve your design from day one and reduce the amount of cracks so they can last longer, and, as a result, spend less money maintaining them,” Alabama civil, construction and environmental engineering professor Dr. Wei Song said.

The team of five are hoping to succeed by setting the focus on small cracks that can appear during the fabrication of concrete girders. Song said that those cracks become more of an issue for longer girders.

“We want to make sure these cracks don’t happen,” assistant UA professor Dr. Sriram Aaleti said. “We have different designs near the end, and we hope to find the optimal design.”

The team has come up with three new designs for the girders’ end zone area where the cracks usually form. After some computer simulations, the researchers teamed up with Hanson Pipe and Precast to fabricate the concrete girders in Birmingham, Alabama, not too far from the University’s Tuscaloosa campus.

Hanson Pipe and Precast, which is one of the largest manufacturers of concrete products in North America, delivered the first of four 54-foot concrete girders recently. The research team soon began testing at UA’s Large Scale Structures Lab with sensors placed in the girders before the concrete hardened. The other two girders using the newly developed designs will also be tested with a load near 1 million pounds, while one is a traditional design control girder.

The research team is hoping the data it collects will be put to use by ALDOT to design and start actually fabricating the longer girders for practical use. 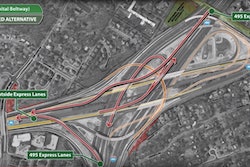 Caltrans worker dies after being hit by suspected impaired driver