Under construction for more than two years and in the works for decades the Downtown Crossing in Louisville, Kentucky, is expected to be open for traffic in the beginning of 2016.

According to WAVE 3 News, the Kentucky Transportation Cabinet is right on schedule to have two-way traffic moving across the new bridge, which spans the Ohio River, by January of next year.

The bridge’s nine piers are already complete, as are several of the towers. Crews are preparing to add the final deck of the bridge to connect the Kentucky side to the Indiana side. The cable-stayed bridge has the tough cables going down from each tower for support. The cables each can carry 40,000 pounds of force.

“Inside those pipes there are anywhere from 35 to 109 strands individually installed one at a time. The length averages from about 150 feet up all the way to 400 feet,” Halterman said. “… If you can imagine a stay that has 100 strands, that’s a lot of force that it can carry.”

When it’s complete, the bridge will be 2,100 feet long with six lanes of northbound traffic—it will be two lanes at first while construction is done on the nearby Kennedy Bridge, which is set to be complete by December 2016.

You can watch live video feeds of the bridge and construction at the Ohio River Bridges Downtown Crossing website. 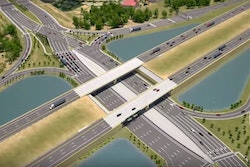 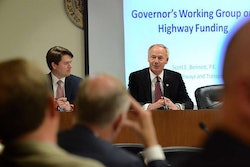